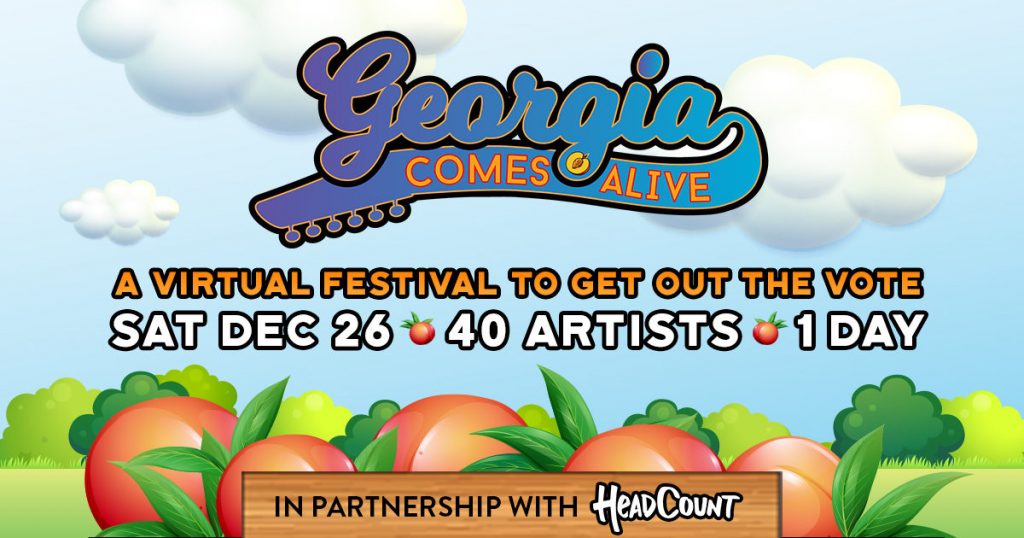 On Saturday, December 26th at 3 PM ET, Live For Live Music, in partnership with HeadCount, presents Georgia Comes Alive, a one-day virtual music festival to promote voter participation in the upcoming Georgia runoff elections by supporting local grassroots organizations like Georgia Coalition for the People’s Agenda and CivicGeorgia. Starting today, fans are encouraged to visit GeorgiaComesAlive.com and donate to the cause. Those who make a donation of any size in advance will receive an email with a link to the stream on the day of the show.

The virtual event, powered by Nugs.net and Plus1, is the latest from the team behind Democracy Comes Alive, Quarantine Comes Alive and Justice Comes Alive, which collectively raised close to $300,000 for various charitable causes and garnered nearly two million views. Like its predecessors, the event aims to direct this momentum toward the critical Georgia Senate runoff elections in January.

Americans turned out in record numbers to vote during the 2020 elections, largely thanks to dedicated activism of grassroots organizations and the historic participation of underrepresented communities in battleground states like Georgia. Neither Georgia Senate seat garnered the 51% majority vote during the general election, triggering a runoff election set to take place January 5th, 2021. While the Georgia runoffs will be decided by local voters, the results will have national implications by deciding which party controls the Senate. For more information on the specifics and implications of the Georgia Senate runoff elections, click here.

Kunj Shah, the founder of Live For Live Music and the Comes Alive event series, felt compelled to turn his sights toward Georgia’s runoff elections following the historic voter turnout in November. “The stakes are incredibly high in the Georgia runoffs. The fate of the music industry, struggling small businesses around the country, and our democracy as a whole are at stake. With Georgia Comes Alive, we hope to once again channel the power of music to support the grassroots organizations getting people to the polls in January and shine a national spotlight on the importance of participation in democracy.”

Georgia Comes Alive is produced by Kunj Shah (founder, Live For Live Music), Don Strasburg (president, AEG Rocky Mountains) and Paul Peck (president, Fandiem; co-founder Okeechobee Music Festival, formerly Bonnaroo) in partnership with HeadCount, the non-partisan organization focused on voter empowerment. Committed to promoting involvement in democracy, HeadCount uses the power of music to register voters, reaching both young people and music fans where they are. Since 2004, it has registered over 600,000 voters through partnerships with touring musicians like Ariana Grande, Dead & Company, and Beyoncé, to name a few, at events like Lollapalooza, Bonnaroo and more.

Andy Bernstein, the co-founder and executive director of HeadCount, looks forward to the virtual music event making a positive impact in such a crucial moment. “This is a great way for people outside of Georgia to support the amazing organizations doing the hard work on the ground in The Peach State. We hope the funds we raise and the positive energy all have a real impact.”

Grassroots organizations in Georgia are at the heart of this effort. The Georgia chapter of the National Coalition is a non-profit, non-partisan organization dedicated to increasing civic engagement and voter participation in Black and underserved communities. Another major organization, CivicGeorgia, is a collective of organizers striving for equity and justice through civic engagement, amplifying the voice, frequency, and impact of community-led efforts for progress.

Hosted by SiriusXM’s Ari Fink, the event will prompt viewers to donate any amount to receive a link to the stream on the day of the show. These donations will be split between Georgia Coalition for the People’s Agenda and CivicGeorgia. Georgia Comes Alive is also proud to partner with Participant Media who, with Magnolia Pictures, released the documentary about Congressman John Lewis’ life, John Lewis: Good Trouble, as well as Fandiem, a digital sweepstakes marketplace bringing exclusive experiences and prizes to super-fans. Starting today, fans can donate for chances to win exclusive prizes from Georgia Comes Alive artists like a guitar played and signed by Bob Weir. To peruse the various prizes up for grabs and enter the Georgia Comes Alive Fandiem sweepstakes, head here.

See below for a full list of participating artists. To donate and secure your spot at the event, visit GeorgiaComesAlive.com.

Andy Frasco and the UN

Tank and the Bangas

Tune in to Georgia Comes Alive starting at 3 PM ET on Saturday, December 26th and visit GeorgiaComesAlive.com to secure your spot now! More information is available over at the event’s Official Facebook Page.