Mick Kolassa Has the Pandemic Blues 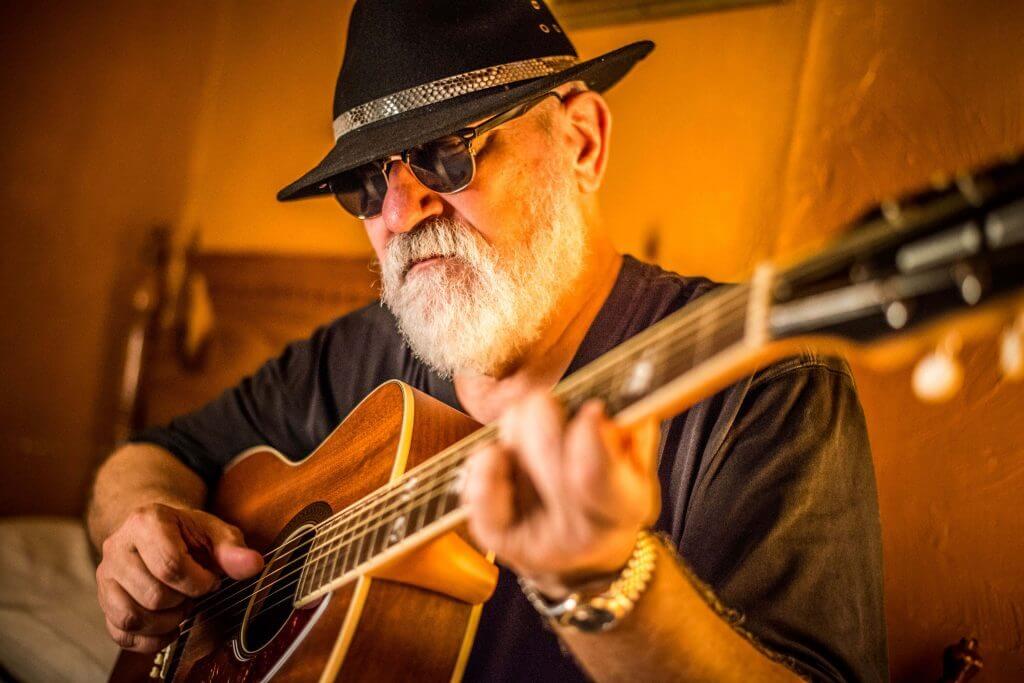 I have a relative who claims that if the world self-destructs, only his father and the cockroaches will survive. Mick Kolassa is sure to be one of those people. He’s a survivor, but he’s no cockroach. 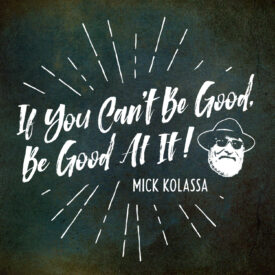 His latest album, If You Can’t Be Good, Be Good at It, is richly produced straight-ahead blues created under pandemic conditions, begun at Ardent Studios and finished up at a small studio in Moscow, Tennessee. “It’s not the end of the world,” he says, “but you can see it from there.”

I got so carried away researching Kolassa’s backstory for our interview that I forgot our interview was at 1pm and not 3, like the others I’d done earlier in the week. He sent me an email to remind me a half hour after I was supposed to call. Here are the first few minutes of our conversation when I called him back.

I am so sorry. I have been doing this for 51 years. I’ve never done this before. You’re the third day in a row I’ve done an interview, and they were each at 3 o’clock. And I got so involved in reading your background that I forgot what time it was. I’m so sorry.

No problem. Let me tell you it’s not you. It’s today. This has been a shitty week.

Yeah, I’ll tell you my story if you’ll tell me yours.

On, Monday I was coming back from Memphis working on a new album and a rock hit the windshield of my brand-new car, took it out. So, I gotta get that done. I had Direct TV cancelled, and instead they cancelled my internet. So, I had to spend three hours with AT&T straightening out their problem. On Monday I enrolled my mother in hospice, and I just dealt with hospice with my wife. And on Monday I also found out she tested Covid positive.

So, they screwed up the paperwork they (wanted) my brother to sign. He couldn’t. I have her power of attorney so that caused all kinds of internal and external turmoil. Wait a minute, There’s more. I’m getting ready to list my house ’cause I’m getting ready to move to Memphis. So, last night my tankless water heater blew out, and I had water pouring down the walls and out of the light fixtures.

Oh, it keeps getting better. This morning I get a call from the hospice nurse saying, “Your mom’s not doing very well. We’ve put her on morphine. She’s really having trouble breathing.” So, I let the whole family know. We’re adults. My mom’s 93. I get a call from the nurse after letting the whole family know this, getting them all ready. “I’m so very sorry. We had four new patients today. It’s not your mother. She’s doing fine.”

Of all the things that didn’t go smoothly today, this phone call is the least of my worries.

God, are you sure you’re up for doing this interview?

People say blues is about catharsis. Some of those same people still cling to the view that only African Americans have pain deep enough to truly exorcise their demons. The pandemic may be making that view less relevant. For whatever reason, Mick Kolassa’s catharsis is as true life as any in contemporary blues.

The last song on If You Can’t Be Good, Be Good at It is “She Kept Her Head Up,” a song he wrote for and about his daughter, Kassi, and her battle with breast cancer. It includes the line: “She lost her hair but she didn’t lose her sass. She kept her head up high while she was kicking cancer’s ass….Love ain’t fair that’s the universal truth. My little girl didn’t need this kind of proof.”

“Last summer Kassi got a hold of me and said, ‘Dad, I think I’ve got breast cancer,’ and I said, ‘Well, let’s talk about it,’ and she talked about the symptoms. She was afraid she had an aggressive form, and it needed to be dealt with, So, she fought hard and did a great job, and it turns out she had triple negative breast cancer which is the hardest to treat because it is such a rare form that they don’t develop new drugs for it.

“So, she went through two courses of really primitive and toxic chemotherapy. I went out to see her in the middle of it last summer, and she said, ‘Dad, my feet are just killing me,’ and I said, ‘Your hands are swelling up.’ That’s something most oncologists pay no attention to, but there’s stuff you can use for it,’ and she said the next day, ‘Something is burning in my mouth.’ ‘Ok, and that’s aural mycologist and here’s something you can use.’

“I was here to help her through those things. Then, she learned more, and my kids really dig in. So, she fought hard, and had the greatest attitude I ever saw. When her hair started falling out, the first thing she did was make a big Fu Manchu mustache and posted her picture with it. That’s my girl. So, she went through all that chemo two different courses of it. Then, she had a double mastectomy, then radiation. Far as we know, she’s cancer free from (NDC) cancer. I’m just proud of her to see how strong she was, and so that song just came out of it, and I’ve always said, if your heart writes a song, you can’t go wrong.

“That song, we actually released it as a single before the album, and we put a video together as a video and as a fundraiser for the Triple Negative Breast Cancer Foundation, and it did pretty well. I said to her, ‘You can have this song. Use it however you want. That is what this is for.’ ”

“She Kept Her Head Up” may not address the same issues as an old Willie Dixon song, but it surely is the real deal blues. The pandemic just made reality of that truth all the more poignant.

“We did the final day of recording at Ardent. That was on the 23rd of March, and I needed get it wrapped up then because the 24th is my wife’s birthday, and I wanted to be home for that, and that’s the last day Ardent was open. They haven’t been open since.

“I had a lot of post-production to do because of different vocals, and bring in horns and harmonica, violin, and that stuff and what we did, the engineer I worked with Mike Carlson who is basically a member of the band in the recording studio. He’s not a musician, but he plays that console amazingly. It’s a little studio in Moscow, Tennessee. It’s not the end of the world, but you can see it from there, and so we (have) the farm house. We went out there, finished with some stuff added, some acoustic guitar, had the horn players come out. There was never more than four people in the studio at the time, and we brought Brad Webb in to do the slide work on “Lo and Behold.”

Kolassa’s songs have more hooks than a bait store, and he has an uncanny ability to find musicians who may not be the best known but the make his arrangements sparkle — like slide guitarist Brad Webb on “Lo and Behold,” the one cover on the album by James Taylor. “He was poised to take off on a national career, but he had a special needs child,” says Kolassa simply. Brad is a hidden treasure, long a favorite of this reviewer that I seek out whenever I’m in Memphis.

Another Kolassa favorite is Reba Russell not on this LP but on others he’s released. “Reba’s on three of my albums and sings like an angel, talks like a sailor.”

The album was co-produced by Kolassa and guitarist Jeff Jenson who is his go-to guy. “He has been and I’ve done two albums without him. The only album I didn’t have him on was an acoustic one. But he’s been the main guy on most. We produce them together. He’s younger than any of my kids, but he’s like my brother, and we get along great and work well that way because we think about music slightly differently, and we can bring that all together.”

By the way, Mick says we should all get the Covid vaccine shot. So, why should we listen to him? Because Mick is one blues artist whose day job credentials may just be more significant than his prolific discography. He has a Ph.D in pharmaceutical marketing at the University of Mississippi in Oxford in 1995. His resume includes being CEO and Managing Partner of Medical Marketing Economics, LLC, a firm with offices in Oxford, Mississippi and Montclair, New Jersey. He is the leading expert on pharmaceutical pricing and value-based strategies, and he’s the author of a book called The Strategic Pricing of Pharmaceuticals.”

In other words, he probably knows more about the efficacy of the Covid 19 vaccine than anyone you or I are likely able to talk to.

“I helped bring some really important drugs to the market, and I thought they were priced really appropriately, but (they said) ‘How can we sell this piece of shit and make a fortune,’ and I said, ‘I can’t do that.’ And that just made me walk away from it. I can’t take this anymore.”

That said, Mick – Dr. Kolassa – says he’ll be first in line to take the Pfizer drug when it becomes available to him. “I will be first in line as soon as I can get in. Here’s the thing they need to understand. These vaccines weren’t just done overnight by miracle. They’ve been working on corona virus vaccines. This technology started with Soars which was corona virus. So, they really understood what to do with these things and so this is just a matter of taking RNA into this thing. The other thing that’s important to understand is they’ve done a good job, and Pfizer didn’t play along with the Trump administration. Pfizer has been sued enough to know they don’t want to take chances. They don’t want to give lawyers an opening.

“What went on (recently) is these outside experts with nothing going on recommend to the FDA whether or not to approve it. Then, FDA had to decide whether to approve it, and then they negotiate with Pfizer what the official labeling is. Now, in the meantime, for you and me, before we’re able to get close to being vaccinated, there’s gonna be 20, 30 or 50 million people will have it in them.

“This will be the biggest clinical trial ever. So, I am not worried about this, and I understand the pricing that Pfizer set. I think it’s very reasonable at $20 a dose. Most vaccines other than the flu cost a hell of a lot more than that, and so I think they’ve got a good shot. Pfizer had not always been my favorite company, but I’ve never seen them gouge. I think they want to do what’s right for people.”

Unlike all the politicians, this guy has no skin in the game.

Think about it. It just may save your life!

Order If You Can’t Be Good, Be Good At It