Corey Ledet is Connecting With His Ancestors on ‘Zydeco’ 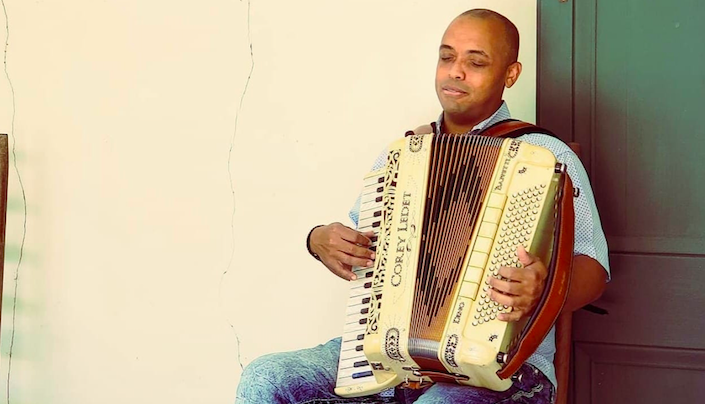 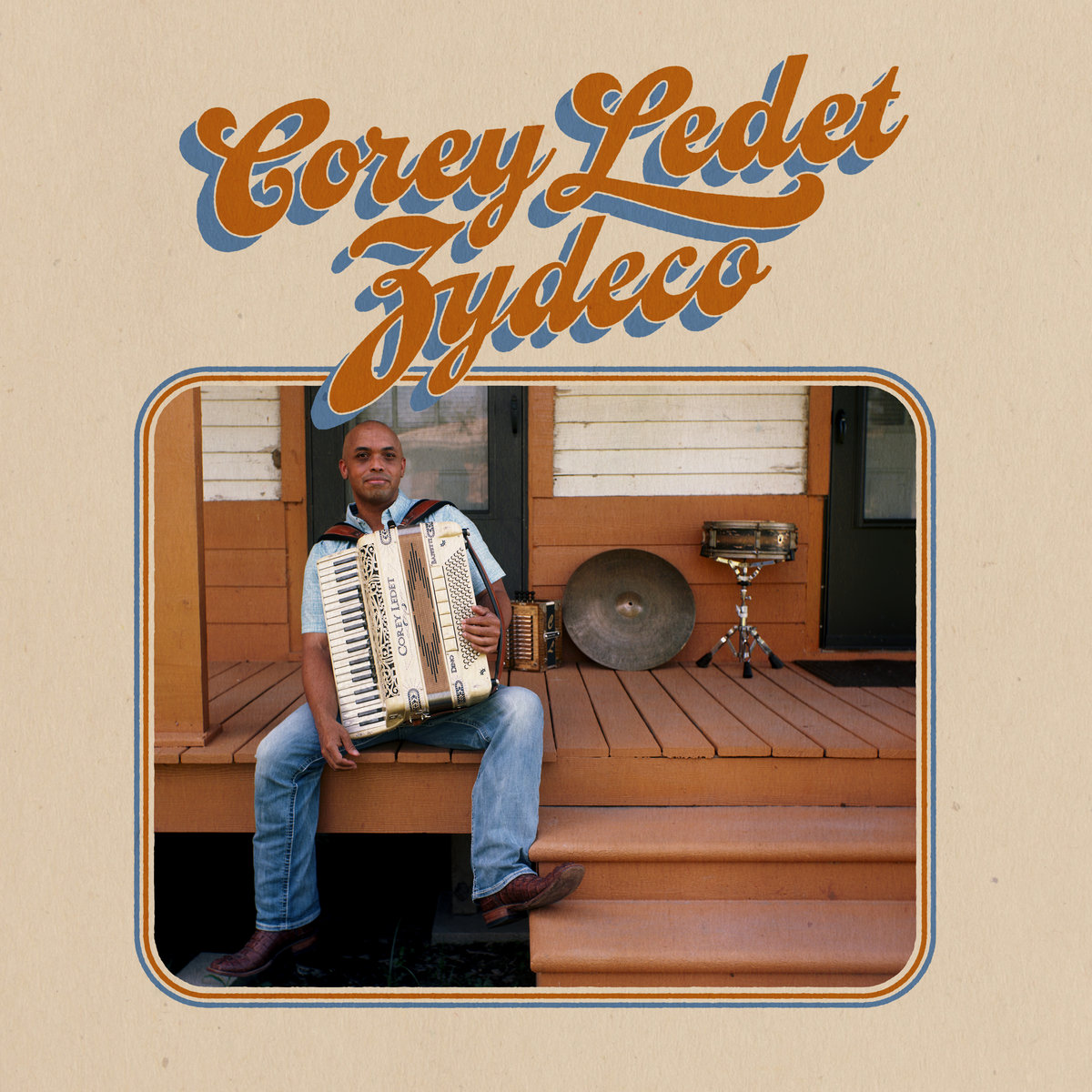 By the time Ledet graduated from high school, he was sure of his life’s vocation in music — eventually moving to Louisiana where he learned everything he could about Creole culture. Having grown up in Missouri City, Texas, you can also hear traces of neo-traditional country in his compelling vocal melodies. But all music runs deep in his soul and finds expression through his striking style.

“Something about music,” he shares with me. “It’s a gift, but it’s a curse. It’s hard to find something that I don’t like. Nine times out of ten, I’m going to like it.” While the cool kids downtown might not understand why you’d have a Pixies record propped up next to a Platters record, the fact that Ledet marches to his own drumbeat has really worked in his favor.

In the middle of recording this album, Ledet didn’t really have a direction of where he wanted it to go. And then one day Lost Bayou Ramblers’ Louis Michot brought up the idea about his family. “He said, ‘What about your family?’ We sat down and talked about it.”

Michot was cleaning his house when a book fell from the shelf in an open position. He looked down and noticed the last name Ledet. It caught his eye, so he read it.

“He had this book that’s about Bunk Johnson, the jazz trumpeter from the early days. He was from New Orleans and then he moved to New Iberia, Louisiana. It’s a book about him and the era, the late 1800s to the early 1900s. The name was Buchanan Ledet, and the instrument was drums. That was my grandfather. He told me about it and sent me some pictures. I went over there and I started reading it and saw a bunch of other family members, like my great-grandfather, all my cousins — the fact that they had all these jazz bands. They were playing ragtime and my great-grandfather was playing with Bunk Johnson on upright bass. All kinds of stuff.”

Ledet had just put down a few ideas, but nothing concrete. “When this came up, it was like a spark. This is it. I started reading the book and I started going around asking questions from my cousins that are still alive, the older ones that are like 80 and 90 now, and getting their stories. Because a lot of the stories were told, but it was so nonchalant. It was just amongst the family and they were just like, ‘Yeah, he played drums. He played with so and so.’ And that was it.

“But this is great history and I need to know all this, right? So I took all that and just started really getting into it. So now, we can add to my list of different music I like; we can add ragtime to that, because I love all that stuff. I always knew about my family history, because my dad would always tell me. But never have I seen anything documented. It was just word of mouth.”

Ledet met harmonica player Grant Dermody through fiddler/banjo player Dirk Powell. “I think it was the beginning of last year. Dirk was working on Grant’s album. They needed an accordion player to do some accordion parts, and Dirk called me. And I don’t stay too far from the studio, so he called me to come in. I was originally supposed to come in and do a little part, and ended up staying and doing five songs with him. And we just clicked together. I’m on his record, and he’s on mine.” Dermody is really a blues man, but following Clifton Chenier’s pattern, he smoothly blends blues and zydeco together.

About halfway through recording Zydeco, the pandemic hit. “The studio was scared to let people come in and then the musicians were scared to come in. It just really put everything on hold. We would go in there as much as we could. Toward the end of it, I just thought it was safer if I just went in and finished the album by myself. I went in there, and it was just me. And the engineer was on the other side of the building. We felt comfortable. I went in and the last three songs I just did myself. I even played the accordion part, jumped off of that, and played the drums on it.”

The opener of Zydeco is a reminder that we desperately need live music, as the high-energy of “That’s All I Want” would play out perfectly in the middle of a big dance floor on a Louisiana Saturday night. “Buchanan Ledet Special” pays homage to his Grandfather who played drums with Clifton Chenier and Rockin’ Dopsie as Zydeco’s first drummer. Buchanan invented the twice-pumped bass drumming pattern called double clutching. “He’s like a celebrity to me,” he says. “I never got a chance to meet him. He died in like ‘78, and I was born in ‘81, so I just missed him.”

Ledet also promotes his family’s cultural heritage by speaking their Creole dialect throughout the album. “Through the music and definitely through the language. My family comes from Parks, which is a small town between Breaux Bridge and St. Martinville. And that whole area — the way they spoke French was a dialect called Kouri-Vini. It’s a little bit different from how people speak French around the Eunice area which is northwest of Parks, by maybe an hour or so. It’s a different dialect. They kind of run words together, and then they speak it in the English form. Whereas in French, sometimes they flip the words to make it make sense. But in Kouri-Vini, you speak it in the English form.”

Spiritually, he’s connecting with his ancestors. From the moment Michot found the book, Ledet never stopped digging. “And I think that this is a step in a direction where I think from now on when I release something there’s going to be a connection somewhere. There’s a fire burning inside me now. Whereas before I was trying to be almost like a singer-songwriter just kind of coming off the top of the head, or use experiences I’ve had in my life. But now it’s like I’ve got all this ammunition to work with.”

“I never knew this (book) existed, so there could be more. I’m sure I could find even more information. Probably some pictures and everything.”  The porch Corey is sitting on in the album cover is his great-grandfather’s house that’s still standing and being preserved by his cousins. Also pictured is Buchanan Ledet’s Ludwig snare drum circa 1940s.

More meticulous family research and bringing it to the world musically is what’s on the horizon for Ledet. He’s even saved a lot of information for follow-up projects.

“I’m really proud of what I’ve discovered officially in this book about my family, because a lot of times I tell people that I come from a musical family. And a lot of times, people are used to seeing somebody that — you know, their father was in the business, or their mother or something like that. But with me, my relatives were in the business but it was so long ago so it gets hard to document officially. So now I can show people. And I’m learning to play the style of music that they played back in the day and mixing it with mine. I’m just excited to promote my family through my music and share it with everybody. It’s cool stuff. I had a cousin that played with Louis Armstrong. As far as I know now it goes back to my great-grandfather, late 1800s ragtime.”