Ghalia Volt Interview: ‘Playing live as a One-Woman Band is Very Challenging, But I’m Digging It’ 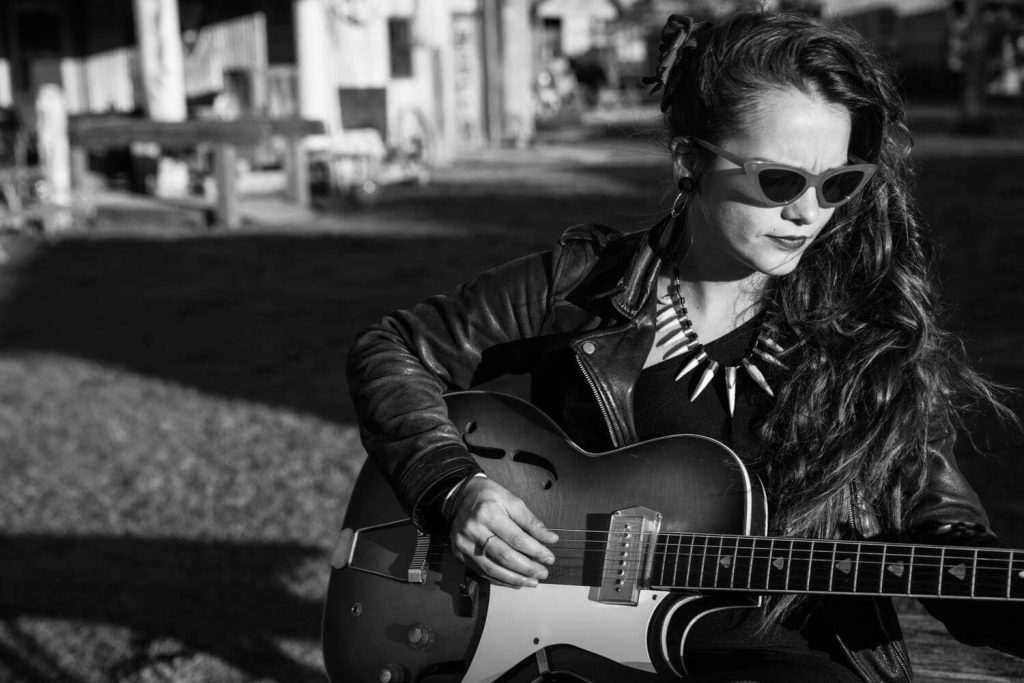 3x Top 3 Billboard artist Ghalia Volt has gone through many evolutions as an artist. But after the effects of COVID-induced isolation, the Belgian blues artist has embarked on her own journey. After signing to Ruf Records and recording her brand new album, One Woman Band, Volt is entering the new era as a more empowered and enriched artist ready to challenge herself.

American Blues Scene caught up with Volt to discuss her ventures into becoming a one-woman band and the collaborations that made the One Woman Band album come to life, her dreams of singing with Bonnie Raitt, why busking is the best school for every musician, her advice for budding female blues musicians, and more.

You’re soon to release your brand-new album One Woman Band on Ruf Records. Talk me through the writing process. I read that you wrote the album while traveling through America via train? What was that like, and what inspired that decision?

In August, I left New Orleans to do a one month Amtrak train trip! For someone used to traveling all the time, five months at home feels like five years.

The goal of the travel was to write the entire album. Most of the songs on the album are inspired by the experiences that I had on my journey. Some are the fruit of my imagination at the sight of the deserts, ocean, mountains, and city lights.

Is there a central theme to the album? What’s your favorite song on it? Why?

There’s no central theme. The songs all come from different stories and feels. My favorite song on the album is “Espiritu Papago.” It’s a mix of a real tale coupled with imagination. In the first month of the trip, I had a bad experience in the Arizona desert. I found myself feeling lost and miserable. Back on the train, the story came to me like a daydream and grew into a song.

The song tells the story of a person lost in the desert for hours, maybe days or weeks, dreaming of water and shade while looking for a sign of survival. I was begging the Espiritu Papago, an American Indian tribe spirit to help and save her/him from the wilderness and the heat of the desert. Musically, it sounds like John Lee Hooker and Jim Morrison jamming while doing mushrooms and being lost in the desert. That’s kind of where the vibe is.

I took a great deal of pleasure in recording that song. The vocal track is my all-time favorite.

You recorded One Woman Band at Royal Studios live to tape. What was the energy like in a room that greats like Al Green have recorded in?

Lawrence ‘Boo’ Mitchell, son of the legendary Willie Mitchell, was the magical ingredient for this record. He captured the sound I was going for. Why? Because he’s got music under the skin. It’s in him. The guy grew up surrounded by all these fantastic artists and watched his dad produce all these classic records.

I appreciate Boo because it doesn’t matter if you play Rap, Soul, Funk, Blues, Hard Rock; he feels it, gets your vibe, and interprets your intentions and sound. But, yes, think about that little Belgian girl who was busking in the streets of Brussels 7 years ago. And of course, it’s a magical moment to share the mixing board, drums, mics, rooms that hosted terrific talents such as Bobby Blue Bland, Al Green, Chuck Berry, Otis Rush, Ike & Tina Turner, and so many others.

You collaborated with a few brilliant musicians on the album. Who would you dream of playing with?

Right! During those last couple of years, I had the great pleasure of meeting new friends and amazing musicians along my travels. Having Cody Dickinson and Cedric Burnside on drums in my last album was magical. The guys bring to your songs a new dimension. Bringing my dear friend Watermelon Slim in the studio for a duet and some harp tracks was another highlight of the last record.

This year I was thrilled to invite Monster Mike Welch to lay some tasty solos and lead guitar parts on two songs. We became friends through the pandemic, and the idea of a collaboration was exciting for both of us. We’d like to do more of that soon.

I would love to sing an old-time rock ’n roll song with Jerry Lee Lewis, write and perform a song with Bobby Rush, sing a duet with Bonnie Raitt, and get the chance to sing an old Staples Singers classic with Mavis; I would feel very fortunate and blessed to have a magical experience.

You started out as a busker in Brussels, went to the US and formed a band, and decided to go solo amidst COVID. Where did you get the idea to be your own band? Tell me about your journey from busker to band leader to the one-woman band. What have been some standout moments?

When I would busk in Brussels, I would always use a foot tambourine on my right foot to add some rhythm to my solo guitar and vocal performances. People have always seemed to love it. What you do is you hit on the 2 and 4 (like when you clap in your hands).

And one day, I thought, “Well, why not complete the rhythm and use a stompbox to hit the bass-y sound on 1 and 3 to answer the tambourine. So I built a stompbox using a regular pick-up and a cigar box, and I had my homemade rhythm section.

In March 2020, I stopped using those little accessories in March 2020 and started to play a real drum kit, including a kick drum, a snare, and a hi-hat combined with a tambourine while playing slide guitar and simultaneously.

Standout moments? I’d say that busking is the right school for any musician. It’s rough and gets you ready for anything. I’ve busked in the snow, I’ve busked in the rain, I’ve busked melting under 93°F. Any venue after that feels comfy! Also, the power of captivating people when they haven’t asked for it—catching people’s attention in a second. Another useful tool for a performer.

What was the first instrument you learnt? What ignited your love for the blues?

I first picked up a guitar when I was eleven. Without even knowing how to hold it or play a chord, I immediately wrote my own melodies. This went on for months, then I learned how to play a power chord and realized that I could then play all my favorite punk tunes. My love for blues grew from there.

As a teen, I was really into Punk and Garage music, the MC5, the Cramps, and many English bands like The Damned and the Sex Pistols. Then I got into Psychobilly, which introduced me to Rockabilly music. That’s when I realized that Rock ’n Roll was originated by Jump Blues, Boogie, Rhythm’n’Blues, which was the evolution and mix of Blues, Gospel, Jazz, Ragtime, Spirituals and Country. And that’s it — digging and digging, listening to old 45s and LP’s. I watched a few Alan Lomax documentaries and discovered Skip James and J.B Lenoir. That was my introduction to the Blues World.

Speaking of COVID. You’re finally playing shows again throughout Europe, what’s it like to be back on stage? How would you describe your live shows?

I’m an optimistic person. It’s been three times that I’ve booked a tour and have had to cancel it. Here in Europe, things have unexpectedly gotten worse with the variation of the virus. I still have some shows booked in March, but venues booked for January and February are either canceling or converting the shows into virtual ones. I don’t have a problem with that. I just performed my Belgian record release show on national TV & Radio. I’m currently in Paris, where I’m recording another show in this beautiful theater where I was supposed to have a big concert.

Playing live as a one-woman band is very challenging, but I’m digging it. I’m pushing my boundaries. I don’t know if people realize the amount of information that goes through my mind while performing. I have to sing and remember the lyrics, mind my pronunciation, play slide guitar while coordinating my feet to play the snare, kick drum, and hi-hat. But I’m excited, and I’m so ready to be back on the road, like the good old days.

Which blues artists inspire you? What would your advice be for young women who want a career in music, in the blues?

I’ve always been fascinated by the ladies! Big Mama Thorton, Koko Taylor, Big Maybelle, Ma Rainey, Sister Rosetta Tharpe, Wynona Carr, Ruth Brown, LaVern Baker, Etta James, Aretha Franklin, Mavis Staples. They are the soulful pioneers of Blues, R ’n B, and Rock ’n Roll. If I had to advise a young lady singer, it would be to listen to those queens and learn from them. Then grab some Little Richard sparks and Little Willie John spices. And you have your concoction.

As far as guitar inspirations, I’m not the Youtube or sheet music type of learner. My travels have taught me more in the last seven years than the previous eleven years of playing. I just love watching people playing and learning from them, asking them to show me some licks and tricks.

Mississippi was the answer for me. Learning from a friend of mine like Sean Bad Apple or even Jimmy Duck Holmes, who themselves learned from Jack Owens, who learned from the great Skip James. For me, that’s the vibe. That’s how I want, and I like to learn music.

One Woman Band is being released today via Ruf Records! Be sure to check out Ghalia on American Blues Scene’s Facebook for a record release livestream on Wednesday, February 3rd at 7:30pm EST.