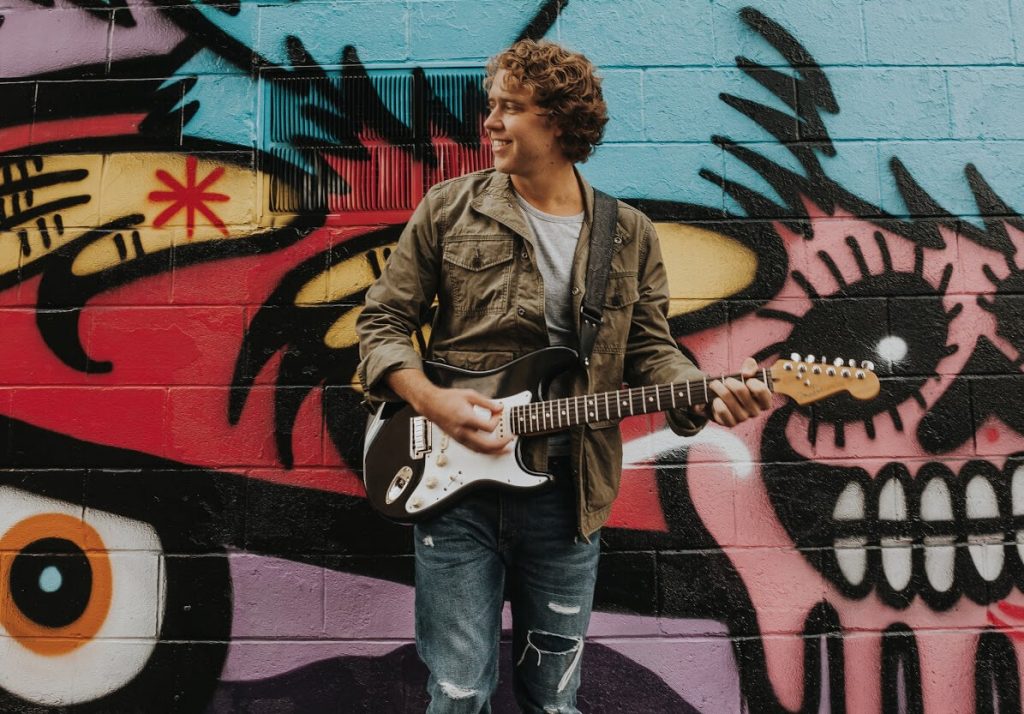 Drew Dvorchak is a Blues rock singer, songwriter,  and guitarist who resides in Denver, Colorado. Born in the Chicagoland area, Dvorchak jumped into the Minneapolis music scene in 2019. He was a frequent guest in The Minnesota Songwriter’s Showcase, which took place throughout the Twin Cities. His debut EP, No Cameras Please, is out now. 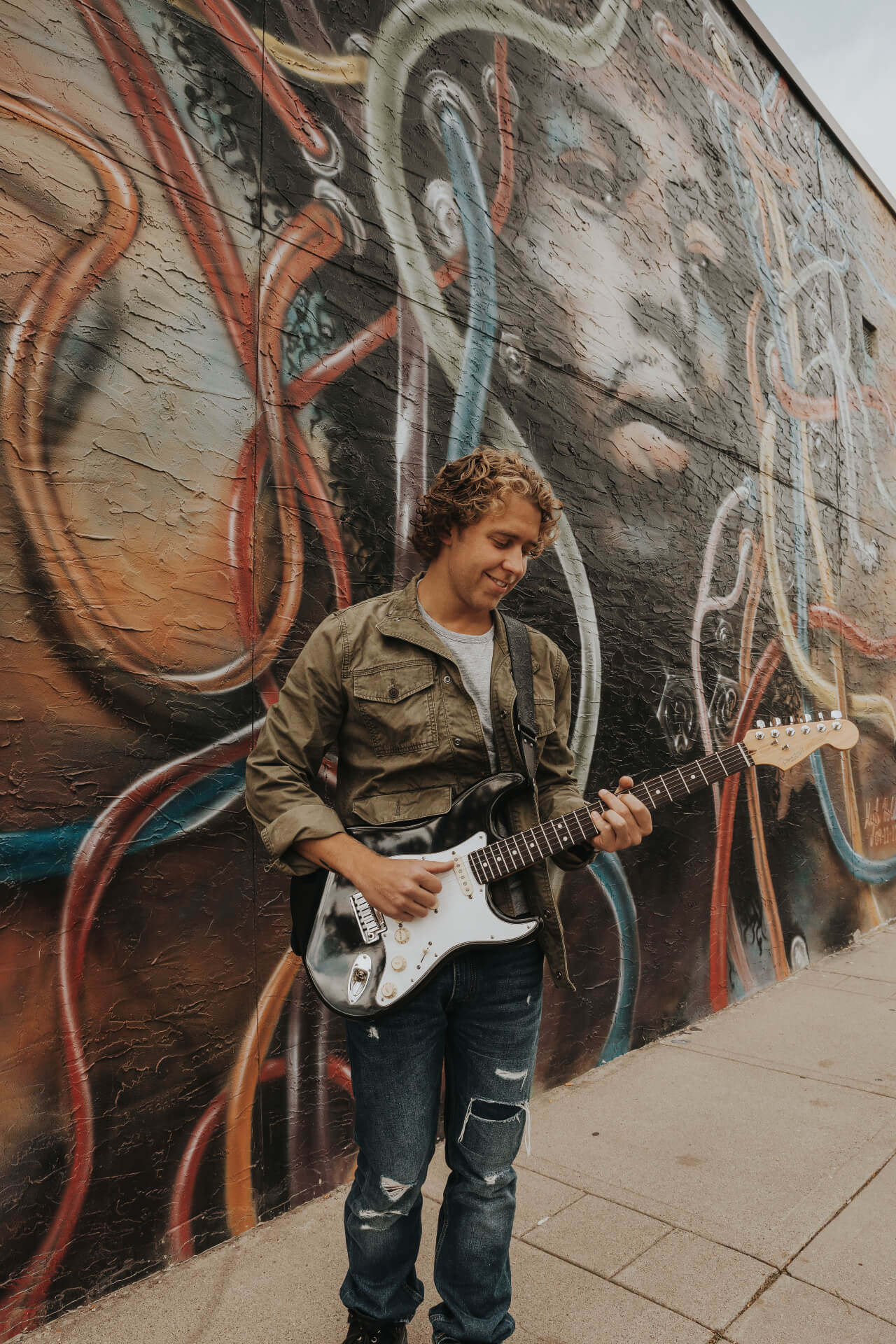 I am a very big fan of Eric Clapton. I love a lot of things that he has done. Recently, I have been listening nonstop to his Derek and The Dominos album. It was a Christmas gift and I have it on vinyl. I really enjoy it. I also like Jimi Hendrix and Stevie Ray Vaughan. I love their twist on Blues and each one has their own style. From the older generation, they are my top three. In terms of the newer generation, I am a huge fan of John Mayer. His body of work is unbelievable. In terms of musicality I think he is one of the most talented guys of our generation.

How did you get into music?

Initially when I was younger, I took guitar lessons from age eight to eleven. I really enjoyed listening to music and I would really get into a few songs and want to learn them. I started learning White Stripes songs. Growing up I was pretty involved in sports and whenever I had a big game, I would dial into music and I would have my headphones on.

I stepped away from music for ten years as I was distracted by school and sports. I had to prioritize my time. It wasn’t until after college that I dove back into it again. I started reteaching myself guitar again. A couple of my friends are pretty successful musicians and they write their own music. One of my friends released a full length album and I thought it was very impressive. I realized if they can do it, I can too.

I started writing my own music and that’s when I met you and started taking lessons from you twice a week. I realized I wanted to get as good as possible and music is something that I really want to pursue. You were very supportive of me and always gave me something that I could work on and strive towards and improve during our lessons. Here we are about a year and a half later and I have now written close to fifteen songs that are pretty much finalized. I will be releasing my first two songs hopefully by the end of the month. I am very excited with what the future has in store.

Can you talk about the new EP No Cameras Please?

The new EP is going to be called ‘No Cameras Please’ and there are going to be two songs on it. The two songs are called, “Change Is Coming” and “Hang On Tight.” “Change is Coming” is a great song for me because it was one of the first songs that I wrote. At the time, I was in a tough spot and the song is very honest.

When I wrote the song, I was struggling with a variety of different things. I was trying to figure out my place coming out of college and what I was going to do with the rest of my life. It is something that a lot of people go through. You finish college and then you are thrown into the real world wondering what is in store. For me, when I wrote the song I wasn’t happy with my job and what I was doing on a daily basis.

The whole song is about not being happy and making changes. I ended up moving apartments and I found my passion with music. It really helped connect me with myself. Things started to fall in place when I moved from Chicago to Minneapolis.

Where was it recorded and what was the process like?

I am really happy with how everything turned out. It was really fun for me because I have only played with a full band a few times in Minneapolis. The band is called Violet Revival and it consists of some of my better friends in town. They liked some of the music that I had written and I liked a lot of their music. We would get together twice a week to jam. We played a few shows together in Minneapolis. They had me play guitar on a few songs and sing some songs which was really fun.

The recording process was fun because I usually play my songs solo. I was able to hear them come to life in a full band setting. It was awesome and something that I want to dive in deeper going forward. The majority of the parts, the vocals and guitar parts, were recorded with Grant Milliren. He is a really good friend of mine from the Chicagoland area. It’s called Grant Milliren Productions.

We recorded at his home studio in his apartment. Our drum parts along with the bass parts were recorded by a guy named Charlie Dresser. He’s a producer out of Naperville, IL and the studio is called Sound Summit Studios. It is across the street from Barnes and Noble on Washington. It’s right by a barbecue place. There is a record store underneath his place called Purple Dog Records. It was a really great place and he was a huge help. He finalized the recordings and gave me tips and feedback.

The Minneapolis music scene was great and perfect for me at the time. I am now in Denver. I was involved in the Minneapolis Songwriting Showcase. At the showcase, they provide an optional backing rhythm and lead section consisting of bass, electric guitar, and harmonica. I started going to a few open mics and met a lot of great people. The thing I was involved in most was the Minneapolis Songwriting Showcase twice a week. One of them was at a bar called Plums in St. Paul. The second one was at The Hideaway Burger Bar which was in Minneapolis. Everything was run by Nick Hensley. He was very friendly and wanted to give people and opportunities to play their music.

The cool thing was at the showcase events you are not allowed to play covers. It had to be all original. It has been going on for about fifteen years. They have some really cool people come through. There is a local musician who was nominated for a grammy; a folk musician named Jay Andara. The showcase allowed me to meet a lot of great people. Everyone had nothing but great advice and guidance.

There is a place called Acadia and they have music all night during the week ranging from all different kinds of genres. I played there about four to five times before the pandemic hit. It was a great place for me to get heard and get my music out there. Minneapolis’ music scene is very folk-driven. Bob Dylan is from Minnesota and every time I came home from one of the Songwriter Showcase, I couldn’t help but listen to some Bob Dylan on the way home. It is the overwhelming genre of music in Minneapolis. There is a real heavy folk influence across the spectrum that I thought was pretty interesting.

Any idea what Denver is going to be like?

It is tough with COVID as most restaurants are only doing outdoor seating and it is the winter now. There is a restaurant right across the street from me and I was talking with them and I discussed playing there eventually. I don’t yet have a great feel as to what the music scene is going to be like here. There is a street close to me called South Broadway. From my understanding, in a non pandemic world, they have a few festivals throughout the year.

All of the bars play live music during the event. It is like an area wide music event similar to what Austin, Texas does on 6th street. I am very interested but to be honest I have only been here for a month. The style of music I like the most is Blues Rock. The more recent music I am writing is like this. I think the genre that I prefer will be more accepted in Denver versus Minneapolis. I did see a guy playing Stevie Ray Vaughan the other day which I was pumped to hear.

Every song that I have ever written has started on the guitar. I pick up the guitar and I find a chord progression that I like. I develop it as much as I can before I put any lyrics to it. In a perfect world, I try to have the verses, choruses, and the bridge mapped out on the guitar. It makes it easier to have the whole framework down before diving into the lyrics. Once I can play the guitar parts with hesitation, I start humming around and try to find melodies. I may not know what I am going to sing about but I try to find what I can sing that will compliment the guitar.

Once I get melodies, I start singing anything that comes to my mind. Once I get a few good ideas, I break out the notebook. I put ideas on paper that I want to build from and I go step by step through each verse and chorus. I do have some songs without the bridge as I feel sometimes they take away from a song. This is usually my process. Lately, I am trying to be extremely honest with myself. You may get writer’s block and feel like there is nothing left to say on the topic.

The most success I have is when I have been completely honest with myself. Even though you and your guitar are alone in a room, you have to throw it all out on the table. You may not even know how you are feeling but when you say it out loud, you start to know exactly how you are feeling. This is a pretty good overview on my songwriting process. Some songs you think are done and finished. When you play them out for a couple of months, you may completely change them and readjust. 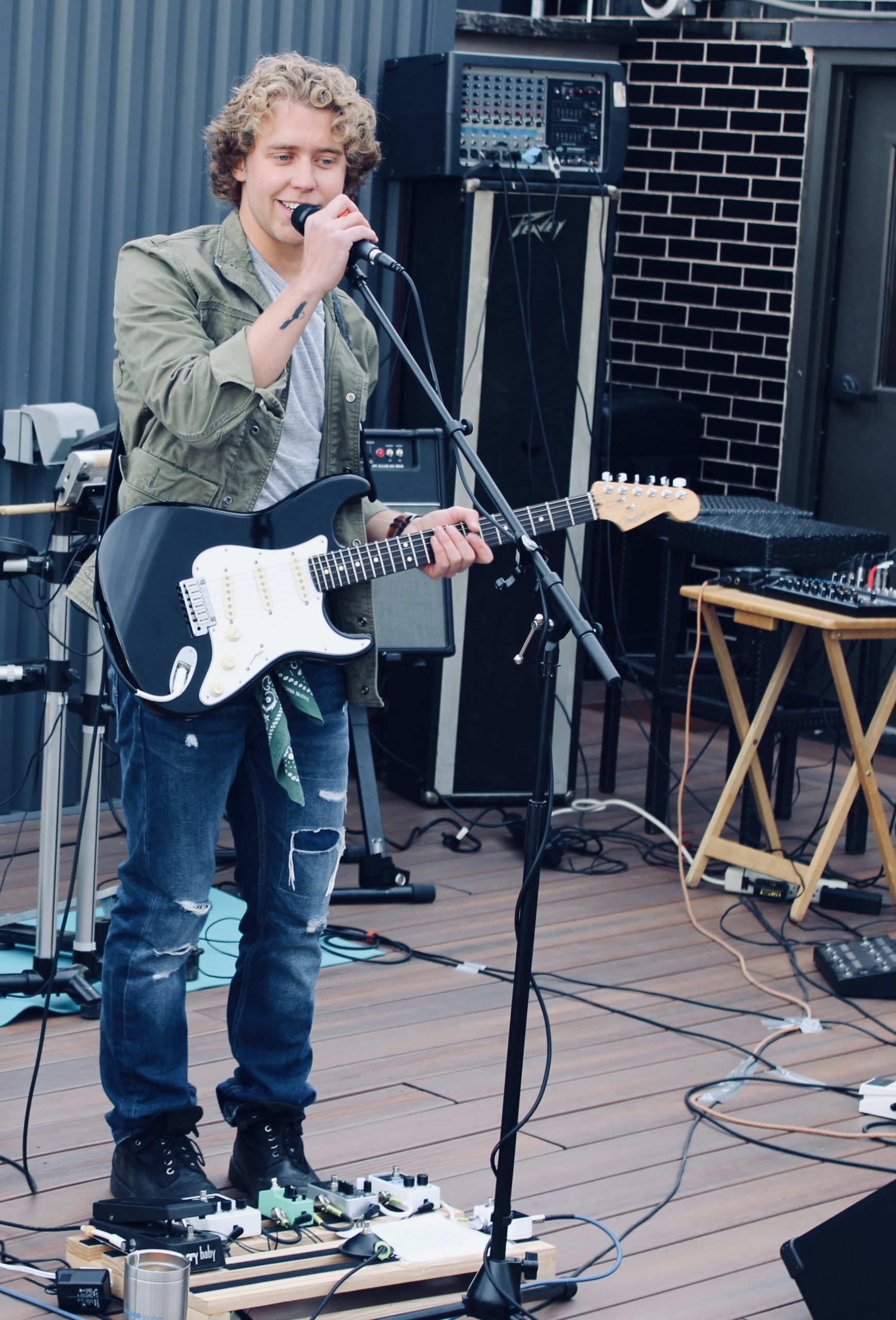 The recording process is new to me and something that I just experienced. I want to keep recording going forward and I would love to release a full length album by the end of 2021. This month I am going to be releasing two songs. I have eight other songs that I am really happy with and I want to record them.

I recently purchased an interface so I can start making some demos. In a perfect world, I would love to release six to eight more songs. I am very excited to get more music out there that people can listen to and build up my portfolio. I am looking forward to playing live again. I am keeping my fingers crossed that the pandemic will start to clear up in a little bit. Hopefully everything will start going back to normal.