Satsang’s Drew McManus Makes a Soundscape for Montana: ‘I feel like Montana has never had a sound and I wanted to make one’ 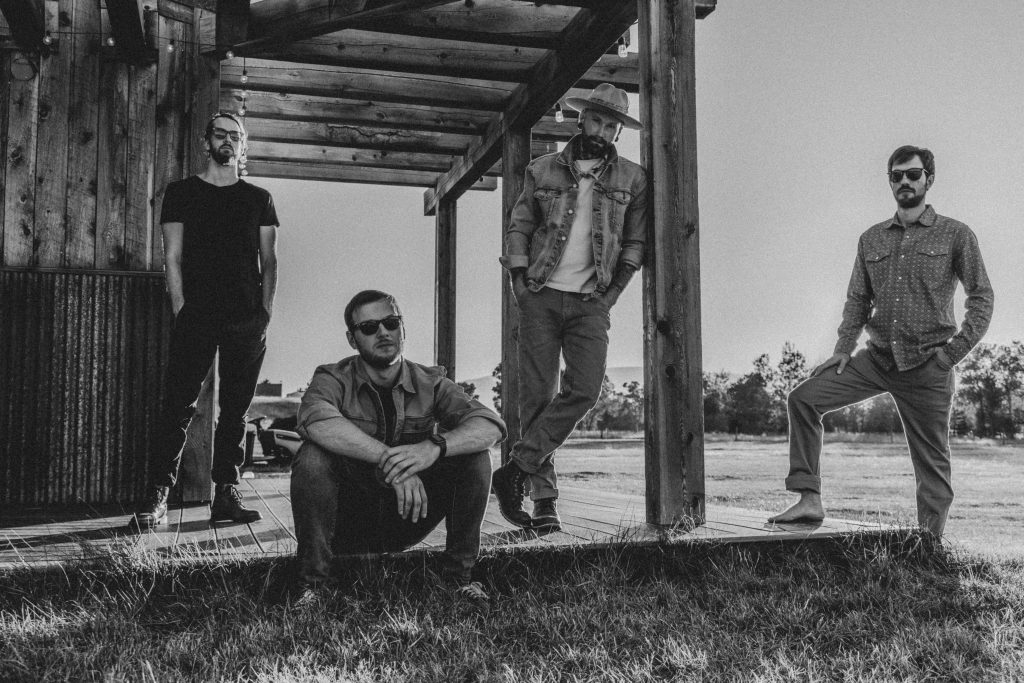 If home is where the heart is, Satsang lead singer/songwriter Drew McManus spent much of his life without a proverbial home. But after many years spent trying to escape cycles of addiction, abuse and violence, he found music — and eventually Montana. “Montana isn’t just where I live,” he says. “It’s my heart, my soul. Along with my family, it’s my everything.”

Satsang have announced their new album and debut release for indie label SideOneDummy, All. Right. Now., written and recorded during an extended hiatus from the road. Living in the Beartooth Mountains, McManus found himself shifting his songwriting back to his roots, resulting in classic country and modern Americana sounds. Wanting his bandmates (bassist Karl Roth, drummer Ben Teters, and guitarist Stefan Kallander) to extract the same nectar of inspiration, he converted a barn into a studio space in the idyllic setting of Paradise Valley, the original entrance to Yellowstone National Park. 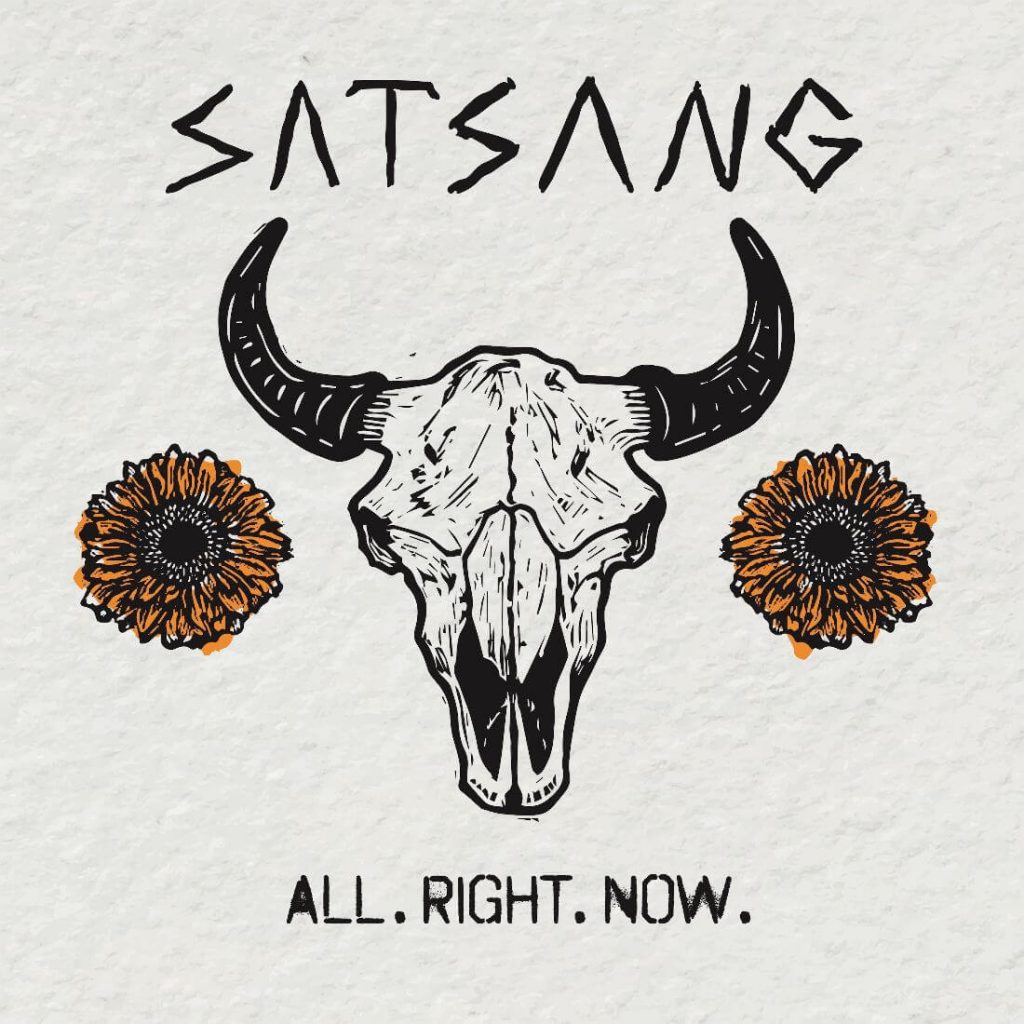 Following 2019’s Kulture, McManus’s theme of thoughtful self-examination is still present on All. Right. Now., but this time with a message beyond just his own story. “I would say the biggest difference is that I really matured as a songwriter. The songs seem way more universal and not as pinnacle to one scene. I really explored a lot of Americana and country vibes on this record. Lots of pedal steel, Tele tones, fiddle, etc. These songs really wrote themself and were arranged in my head far before we hit the studio. This is by far the biggest sound we have ever brought to the table.”

Where did it begin for McManus, and where has it taken him? “I started playing guitar in about sixth grade. I was always really into punk rock, my mom was always playing country, and I also had a deep love for hip hop music. I was blessed to find skateboarding which led to so much amazing underground music. When I moved to Chicago, I met Karl. He was the first person I met that really had a grasp on recording, and that’s what we did — and still do,” he laughs. “After years of drug and alcohol abuse I moved to Montana to try to start over and get my life together and stopped playing pretty much. Then I met a woman (now my wife of over 10 years) who encouraged me to start writing again. After a trip to Nepal in 2013 I made the decision to go all in and just haven’t stopped. Writing, recording, touring, etc. That’s been my life since then.”

All. Right. Now. is his “soundscape for Montana,” in addition to his personal growth. “It’s a blend. On one hand I feel like Montana has never had ‘a sound’ and I wanted to make one. I wanted people to listen to this record and go, ‘This sounds like Montana.’ I also have done so much growing since COVID hit. It forced me to look in and find identity outside of Satsang, especially bring home. And I took the time and really dug into therapy and trying to heal up old stuff.”

The word satsang is a Sanskrit word where “sat”’ means the absolute truth and “sang” refers to the company of seekers or Saints. Together it means the company of the absolute truth. McManus seems to be in said company when getting these songs out from the mind and heart to the pen and paper. “99% of the time it happens super fast. The song just starts playing in my head, and if I can get out of the way it comes through really fast and naturally. This usually happens at extremely inconvenient times. I have kind of made a deal with my creativity; it has pulled me out of poverty and made a life for my family. So in return I have agreed to pick up the phone whenever she rings.  Even if it’s at an inconvenient time.”

Among what contributes to his ever-developing sonic palette are his travels, which include a month-long backpacking trip in the Himalayas. He shares such journeys through song and poetry. “Traveling the country has exposed us to phenomenal music,” he explains. “In Nepal I really just dove into writing; they weren’t songs quite yet. But traveling around the country I fell in love with music because that’s what we do: ride in a van and listen to music the whole time. Whether it’s hip hop day or Waylon day, I am just never not listening. Same with all the guys.

“I think what makes Satsang special is you have me, who went to Nepal and was given this weird creative gift atop Renjo pass; Karl who is a modern folk encyclopedia; Ben who is deeply saturated in African music and reggae and has spent time in the places that music came from — learning from thousands of years of tradition; and Stefan who is a white Bootsy Collins with a guitar. This weird blend of different tastes and styles, but we just work together. It’s also funny and worth noting that we are a roommate band. Karl and I lived together in our early twenties and were supposed to be going to college, but just partied and wrote songs. And Ben and Stefan both lived together and attended and graduated from Berklee School of Music together. Karl has been with me from the gate pretty much. Ben joined us in January 2018. And Stefan’s first tour with us was unfortunately our last since COVID. We will be adding a couple other players to perform the new record to its full potential.”

Tom Petty exerted no small influence on this album. “Making the hook — something everyone can sing, playing a tele like its an acoustic guitar and never playing soft,” he elaborates on what makes Petty his hero. Continuing, “To never being afraid of letting a big recorded song be performed with just an acoustic guitar and a mic. Also, never bowing creatively and always making music that made my heart warm, not music I think other people will like.”

As McManus ponders in the title track, he resolves, “While everyone makes sideline calls, it’s you who stands and builds a wall / But I alone will answer / And as for now, it’s all right now.” Given the countrypolitan-flecked, consummately executed steel arrangements, his list of country influences comes as no surprise. “As far as country, my first musical idol was Garth. My mom recorded his NBC Special on VHS and I watched it at least once a day and ran around pretending to be him.” He continues, “George Strait, Randy Travis, John Prine, Willie, WAYLON FUCKIN JENNINGS! But in recent years I have really fallen in love with Turnpike Troubadours, Stapleton, and Jason Isbell. I would also be remiss if I did not tell you about a kid from NC named Jon Montgomery. He is a freakishly good songwriter.”

When not on tour, he is a stay-at-home dad with four kids, which has taught him patience and a love that can’t be explained until you have it. “Nothing matters if I don’t have my family. Living not for myself but for preservation of others and cementing a legacy. I can’t wait for the day that my grandkids have pictures of me now and say, ‘That tattooed guy with the cool hat and the joint is my grand dad.’ “

After navigating the fundamentals of his recovery, he imparts these sensible words to those who may be struggling: “It gets better. The hardest part of leaving addiction is believing the promise of something better, and you don’t know how much better it can get until you take that leap. Jump. Also, AA isn’t for everyone; the 12 steps are crucial but in this day and age there are so many approaches to start the healing process that we are just now tapping into.”

McManus works toward social and environmental change. The organizations he is most active with are Unlikely Heroes, who he raises funds for every year, and Unlimited Sciences. “Unlikely Heroes is an amazing organization that rescues children from sex trafficking and helps them rebuild their lives. It is absolutely insane the work that these women do and the way they turn lives around. Unlimited Sciences is an organization working to bring an overall change to how we view psychedelics. They have been working with Johns Hopkins gathering data on the use of these sacred plants in treating everything from addiction, depression, and PTSD to head trauma and CTE. They also are responsible for legal changes and reclassification/decriminalization of psilocybin in CO.”

In support of the latest project, Satang are gearing up for a proper tour. “As soon as they tell us we can go we are ready to go. We are locking in dates for October and November and will hopefully be able to make them happen. If those go through we will be touring in the winter as well. I can tell you that the show/sound will be bigger and better than ever. Nothing like the old shows. Full level up.”

All. Right. Now. has a street date of June 4th.