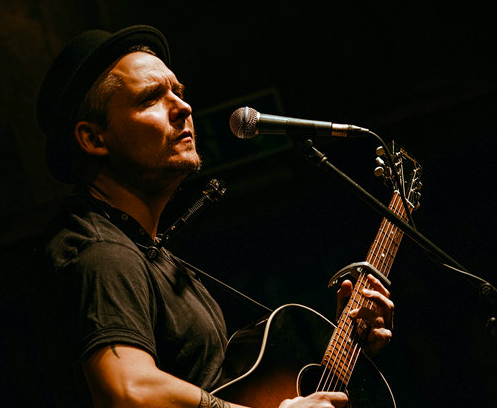 For the past 12 months, as venues have remained closed, musicians have relied on CD sales and home performances to earn a living. When it comes to the latter, surely there is no substitute for a real live concert, so how does Sean Taylor achieve virtual reality from his north-west London abode?

Twenty years of non-stop touring across Europe and beyond has established Taylor as the ultimate road warrior who has made hundreds of loyal friends on his travels. These fans support his work through good and lean times, a large proportion of them forming an enthusiastic and knowledgeable collective to watch this February 13th Facebook event. Throughout the show they send a constant stream of comments to Sean and to each other, thus interacting in a very different way from that of a traditional live gig. Significantly, Sean is staring back at each watching face, talking to individuals and giving and receiving feedback. The outcome is a highly personal, reciprocal outpouring of love, peace and respect, a feeling that we are all in this together and will come through it together. 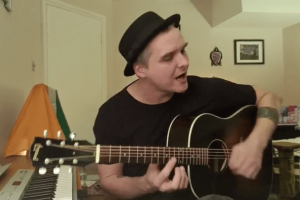 Who isn’t curious about a musician’s home, and what is more inviting and personal than a reception room, albeit turned into a makeshift studio? Above all, there is an upright piano and not all of Sean’s gig venues provide such a luxury so this is a major bonus. This reviewer has not heard Sean play a piano since The Monaghan Harvest Time Blues Festival over a decade ago, so his magnificent rendition of “Codeine Dreams’ is a revelation as the keyboard skills are both impeccable and atmospheric. The advantage of these virtual virtuosic instrumental interludes is that the audience benefits from close up camera shots and thereby a greater understanding and appreciation of the techniques deployed.

Fans were invited to submit requests beforehand and Sean includes a high proportion of these, some of which he has either never sung live before or have not featured in his repertoire for several years. These include the opening ballad, “The Only Good Addiction Is Love”, an inspirational song from the groundbreaking eponymous album based on a quote by former Uruguayan President ‘Pepe’ who gave his money to charity. Other requests may be less familiar to the viewers, such as “Number 49” with its funky beat courtesy of percussive finger work on the guitar strings. It also provides an opportunity for wailing blues harmonica accompaniment, adding that genre firmly into the mix. The harp attack continues with the infectious “Laissez Les Bons Temps Rouler” as Taylor lets the good times roll. “Ballad Of A Happy Man” is another pleasant surprise, a lesser-known song dedicated to an elderly neighbor, now deceased but fondly remembered.

Love Is In The Air

It may be the timing in relation to Valentine’s Day but the romantic side of Taylor comes to the fore, acting as a reminder that he is at heart an aesthete and a writer of lyrical poetry, as well as an activist and angry polemicist where circumstances demand responses. The love song, “For You” from the Walk With Me album, with its mellifluous vocals and gentle chord strumming is complemented by the Lorca-inspired “Perfect Candlelight” from the same album — the softly sung chorus mantra adding intrigue and mystery. Sean has not played what he calls a soppy Valentine song, “Until The End Of Time” for about 8 years but he is quickly into the up tempo country vibe and theme of everlasting love.

Sean appears not to have wasted a minute of lockdown, writing a plethora of new material, releasing two new albums and learning classical piano. Lockdown also marks a pivotal career point with seven political spoken word tracks on this album. “Herd Immunity Part 1” gets the full impassioned works from Taylor tonight with its eerie repetition of the slogan, ‘Stay Alert, Die Quietly, Don’t Complain,’ Sean’s anger and frustration self-evident as he challenges the establishment.

A Sense Of Optimism

As soon as Sean hit the first chords of Richie Haven’s “Freedom,” thoughts turn to the spirit of Woodstock and that very special sense of freedom generated by the hippie counter culture of the late 60s. Tonight has a different connotation in that the word ‘freedom’ resonates with making it through the current crisis after a twelfth successive month of living through a coronavirus pandemic. Are we finally getting closer to normality and those live musical experiences and social contacts we yearn for? As Sean Taylor confidently predicts in his parting words, “We’ll Meet Again.” However, the final say goes to the message posted by John at the end of the show, “We are really missing live music but this has really filled up our music souls Sean. Thank you so much for a magic evening.”

This concert is available until February 20th.