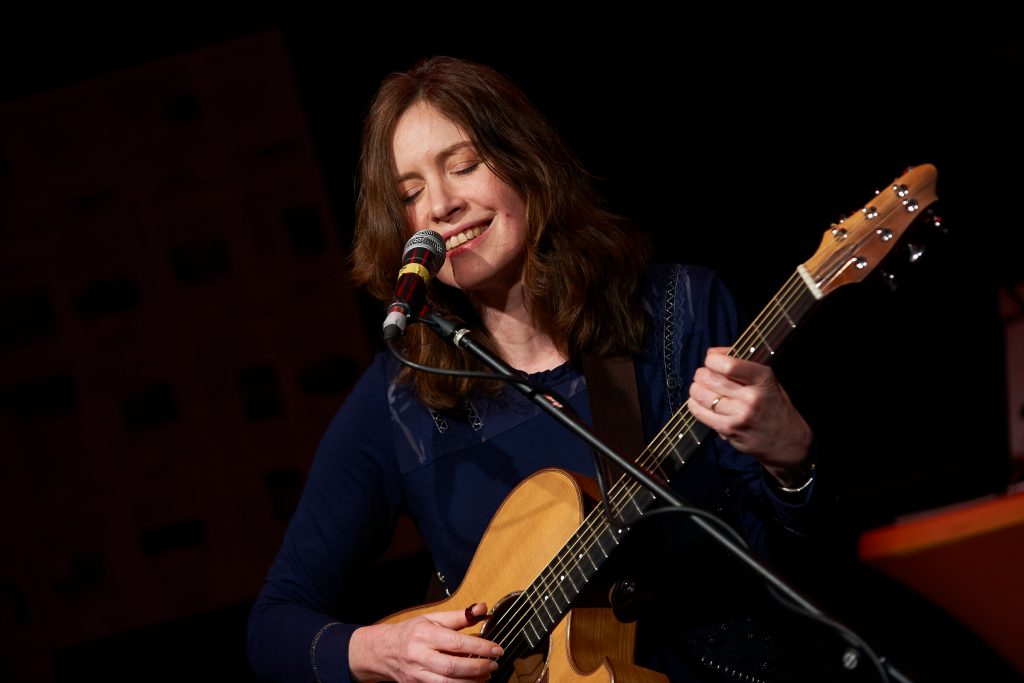 Award-winning singer, songwriter, and multi-instrumentalist Sarah McQuaid was born in Spain, raised in Chicago where her mother played the blues, and now lives in Cornwall via a spell in Ireland. Sarah’s music reflects the diversity of her influences and rich multicultural background, evident in the first three singles and videos from her forthcoming album, concert film and video series, The St Buryan Sessions. Filmed and recorded live with no audience, due to COVID-19, in the beautiful 11th century church of St Buryan, Cornwall, its atmosphere makes this a very special performance.

The guitar instrumental “The Day Of Wrath, That Day” first featured on Sarah’s seminal 2018 album, If We Dig Any Deeper It Could Get Dangerous, produced by UK folk and blues legend Michael Chapman. He was famously described in The Guardian newspaper as “the godfather of new cosmic Americana.” Chapman’s 1978 Playing Guitar The Easy Way was one of the first instructional recordings and publications to showcase the use of open tunings like DADGAD. This tuning had been developed for the guitar by a key figure in the British 60s folk revival, Davey Graham, who derived it from hearing the sound of the oud and then adapted it for use in performing Celtic, Moroccan and Indian music. McQuaid wrote The Irish DADGAD Guitar Book and runs guitar workshops across the UK, Ireland and USA; she is a recipient of the Lifetime Achievement Award from the prestigious Ards International Guitar Festival.

Much of the originality comes from McQuaid’s DADGAD tuning which creates a full sound as result of all the sympathetic resonance achieved with so many strings tuned to the same frequencies. It also enables her to play a hybrid of chords and melody, the resonance from the overlapping notes and drone effect giving an Oriental, haunting flavor. The gentle, evocative, repetitive sounds are enhanced by the magnificent acoustics of this ancient ecclesiastical setting giving them a spiritual dimension.

I first met Michael Chapman seven years ago when we were both playing at a festival in England. Watching this legendary guitarist, I was blown away by the singer and songwriter in action, performing solo but filling the vast stage with his powerful presence and massive guitar sound. Before the ‘Dig Any Deeper’ album, I’d never played electric guitar; it wasn’t something that would even have occurred to me, it was totally down to Michael. Whilst staying at his house during one of my tours, he produced this lovely red Ibanez Artist, plugged it into an amp and said “Try playing this.”

If anybody else but Michael Chapman had handed me an electric guitar and told me to play it, I’d have said, “Nah, I’m really more of an acoustic guitar type.” But when it’s one of your heroes handing you one of his own instruments and you’re a guest in his house, you say yes, so I took the guitar and started playing it, and almost immediately I was blown away by all the different sounds I could get out of it: sounds that wouldn’t have been achievable with an acoustic. I was totally and utterly entranced, and I just sat there cross-legged on the rug beside the amp, playing and playing for ages while Michael sat back on the sofa drinking wine and smiling to himself.

But then we went off the next day and continued on the tour, and I guess if I thought anything it was something like, well, maybe someday if I can ever afford it I should think about buying an electric guitar. So it was a total bolt from the blue when Michael phoned me up months later, after we’d started talking about him producing my next album, and said, “I need you to give me your address so I can UPS you that red guitar you played the last time you visited. I want you to write some songs for the new album on it.”

I always like to include at least one instrumental track on any album I make, so of course I wanted to write one on the electric, to take advantage of that whole sonic spectrum that I’d never worked with before. But every time I played the piece it started taking me somewhere different, and by the time we got into the studio and started recording the album I still hadn’t settled on a final version of it. I was really worried that the track wasn’t ready to record, but Michael said “Just sit down and play it a few times through and we’ll record it.”

I think it was only the second or third take I did that Michael said ‘That’s the one’ while the final note was still tailing off – on the album version you can actually hear him say it. So then I had to sit down with that recording and memorize what I’d done so I could play the track live! And thankfully I still have the guitar on long-term loan from Michael, so I was able to use it for the St Buryan Sessions recording.

I’ll be releasing a cover of one of Michael’s songs as part of this series and readers can subscribe to my Bandcamp page and YouTube channel if they’d like to be first to know about it when it’s due for release.

These first three singles, “The Silence Above Us”, “Charlie’s Gone Home” and “The Day Of Wrath, That Day” are available for streaming and download via Spotify, iTunes/Apple Music, Amazon and other services and also as a pay-what-you-want download via Bandcamp.

The roll out of singles and videos will continue throughout the year, and Sarah hopes to release the full 15-track, 72-minute album on CD and double LP in late summer by Shovel and A Spade Records.