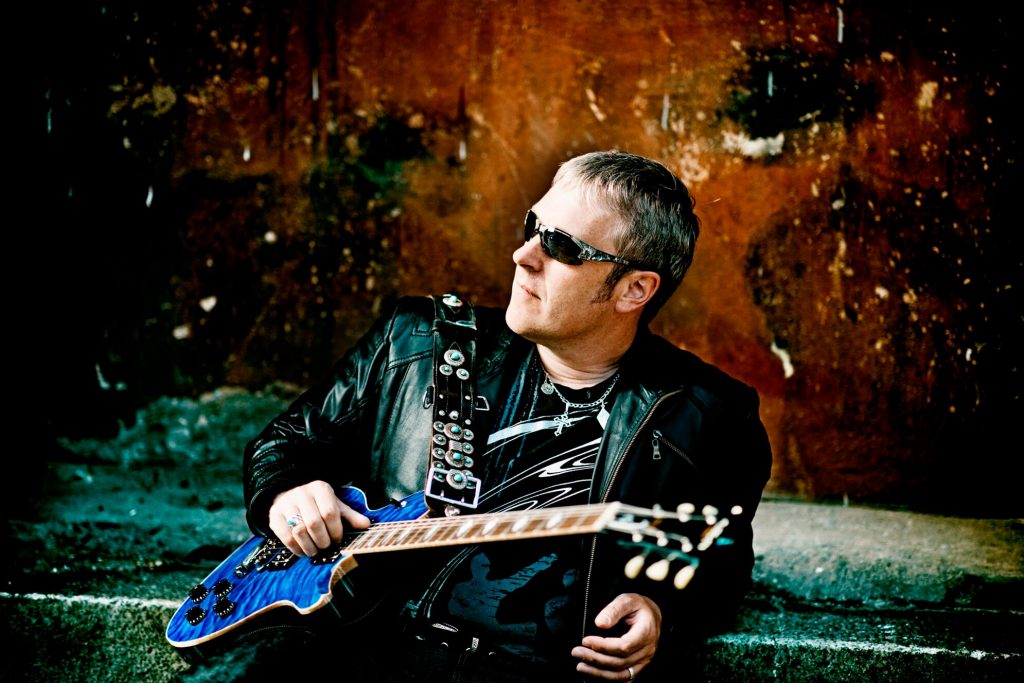 BEM Records/Amplified Distribution proudly announces the North American May 21st release of Storyteller, the new album from Irish blues-rock guitar sensation Eamonn (pronounced “A-min”) McCormack. Maybe it’s something in the water over there, because music seems to be embedded into Irish people’s DNA; and international blues-rock singer/songwriter/ guitarist Eamonn McCormack is no exception. 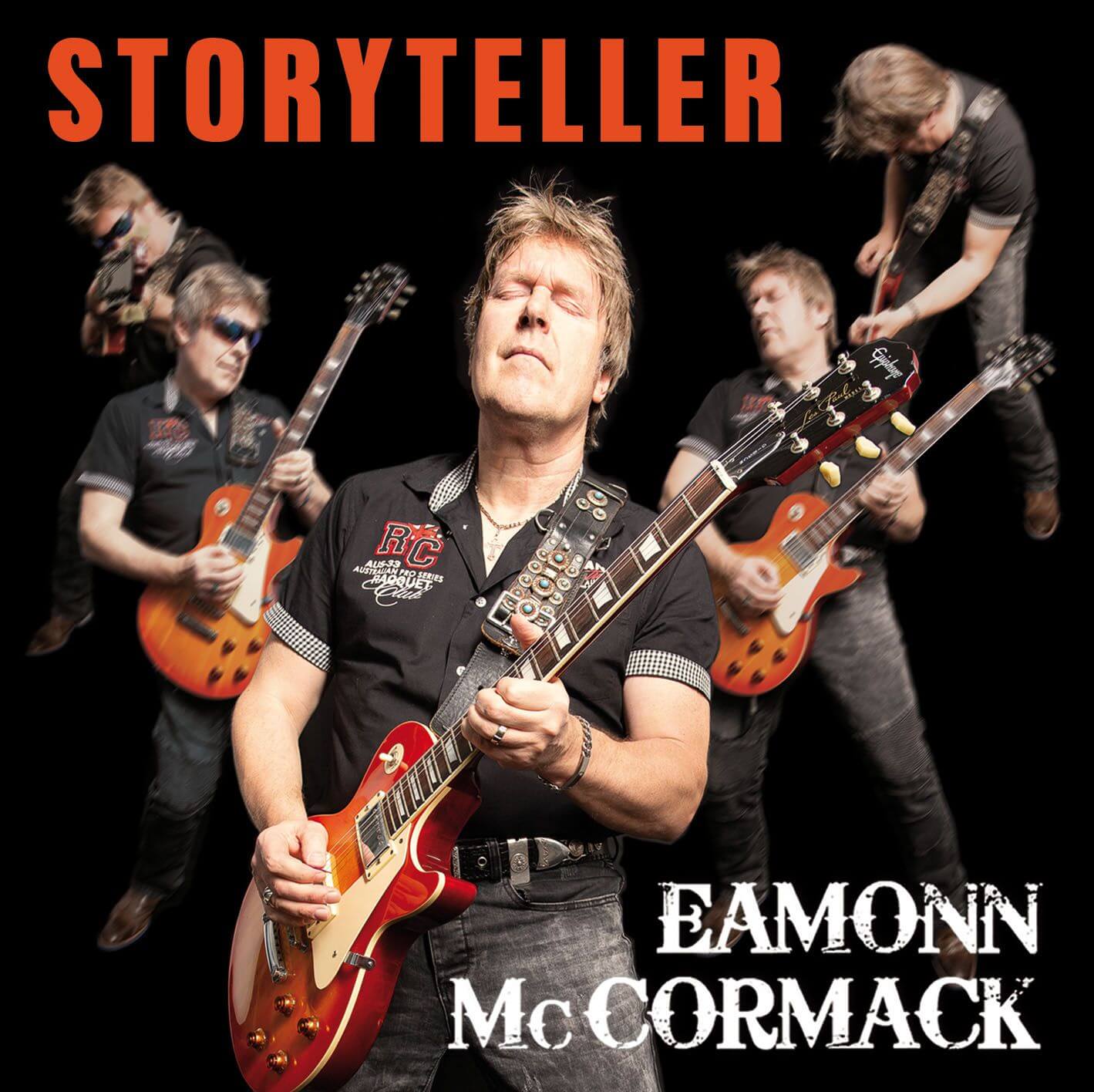 McCormack is the latest emerging Irish star and is already well-known throughout Europe. Storyteller is his seventh album and is jam-packed with 11 original tracks, the core of which were recorded live in the studio to capture the true essence of Eamonn and his young energetic band: Eamonn McCormack (guitars, all vocals and harmonica); Edgar Karg (bass guitar): and Max Jung-Poppe (drums and percussion); with additional contributions from producer Arne Wiegand (piano and organ). Going into the studio, the band was still on fire after an ecstatic live performance at Germany’s renowned “Rockpalast” TV show just days before.

“Storyteller is my most personal album to date and I believe it captures snapshots of my life and travels,” McCormack says about the new disc. “For Storyteller, my approach was a little different, too. For starters, I wrote the complete 11 songs sitting on a couch with an acoustic guitar and the record button pressed on my phone, as opposed to electric strapped on my back and putting ideas down track my track in my home studio.

“That different approach seemed to have me focus more on the storyline, the vibe and the melody instead of the guitar riff-based approach. Oddly enough, although written with an acoustic, a couple of tracks end up pretty heavy rock-wise.”

Producer Arne Wigand knows what energy in music is all about, and that’s exactly what he achieved in capturing the “hairs on-the-back-of-your-neck” vibe of the tracks. From the slow, emotional songs to the fast-rocking tracks, Storyteller is a full-throttle musical thrill ride. It offers just the right blend of thoughtful ballads and light-hearted lyrics into the whole mix, too.

“Guitar soloing came to mind after the songs were finished, and I just followed my gut feeling and played them for the song,” McCormack admits about the recording. “For the most part, first takes live in the studio were used. The more I record, the more I realize first takes tend to have a spontaneity emotion to them, sort of a direct link to your inner soul. Maybe even a primal scream flavor, rather than using your head to figure out what licks might work here and there.”

Storyteller is a roller-coaster ride of feelings, as Eamonn takes listeners through his stories and a glimpse deep into his inner soul, gripping your emotions in all the right places. Before the end of the first song, it’s apparent that this is no ordinary guitar player fresh from the University of YouTube lessons; this is as real as it gets, performed from someone who has lived it!

“The first track on the album, ‘The Great Famine,’ is rather personal to me,” he says, “because it’s a dark part of our Irish history and one my great-grand-parents lived through. We had studied it in high school, and for decades I wanted to write a song about this sad event that happened. My manager visited an exhibition about the Great Famine in Dublin, and when I picked him up at the door, there was a large black and white picture from that period, so I took a photo of it and said to him, ‘OK, now I have the photo to remind me, it’s time now to write that song.’”

Many musical influences creep into Storyteller, as listeners hear how unique and diverse he really is, which separates him from most; and the one interesting personal achievement is the fact that Eamonn actually got to play, tour and record with most of his childhood idols, including everyone from Rory Gallagher to ZZ Top and Johnny Winter to Walter Trout.

As a live performer, he is as exciting as it gets; no gimmicks, just pure energy and emotion. Eamonn’s a true road warrior who performs mostly original songs, but when he does play a cover puts his very own stamp on it. He’s also a festival favorite that has got to rock some of the biggest and best-known festivals in the world.

Eamonn McCormack was born in the center of Dublin, and raised in a north side suburb. He started playing guitar at six, and by 12 had already decided he would dedicate his life to being a musician and becoming the best he could be. Soon, the young teenager acquired his first electric guitar (a Guild Starfire), progressed to lead guitar and joined a local garage cover band prior to playing his first paid gig. At 16, Eamonn performed live on a national Irish radio show soon won a major high school competition performing his own material. By then, his personal musical favorites included Jimi Hendrix, Eric Clapton, Thin Lizzy and Dutch group Focus.

After a short stint playing in various bands throughout Ireland, Eamonn headed off to the USA, where he performed extensively. He later joined a band in California that was an offshoot from Canned Heat and JJ Cale once showed up to jam with them. There, he broadened his musical horizons, gained vital stage experience and absorbed fresh American music and cultural influences. This blended together nicely with his earlier influences.

Returning to Ireland after four years traveling and performing in the States, Eamonn was by then developing a very unique style and sound all of his own. This style was solidified while Eamonn performed live extensively under the stage name, “Samuel Eddy,” establishing himself across Europe the hard way through a grueling tour schedule. Samuel Eddy and his band were rewarded for their efforts and garnered the reputation as major European music festival favorites.

Throughout the last decade or so, a young Eamonn played, toured and recorded with many of his earliest guitar influences, such as Rory Gallagher, Johnny Winter, Jan Akkerman, Pat Travers, Walter Trout, Brian “Robbo” Robertson (Thin Lizzy) and Nils Lofgren. Another highlight of this period was Eamonn and his band’s unforgettable performance at the Parkpop Festival in Holland to an audience of half a million people, sharing the bill with Robert Plant among others. Eamonn also got to play the prestigious “Rockpalast” in Germany on a bill with Lynyrd Skynyrd and The Band that was televised and broadcast across Europe.

Storyteller is the product of all the musical, spiritual and physical journeys Eamonn McCormack has traveled over the last 10 years, and he invites the listener to sit back and enjoy the ride with him. And never, ever, ever think of missing him live when he’s in your area!