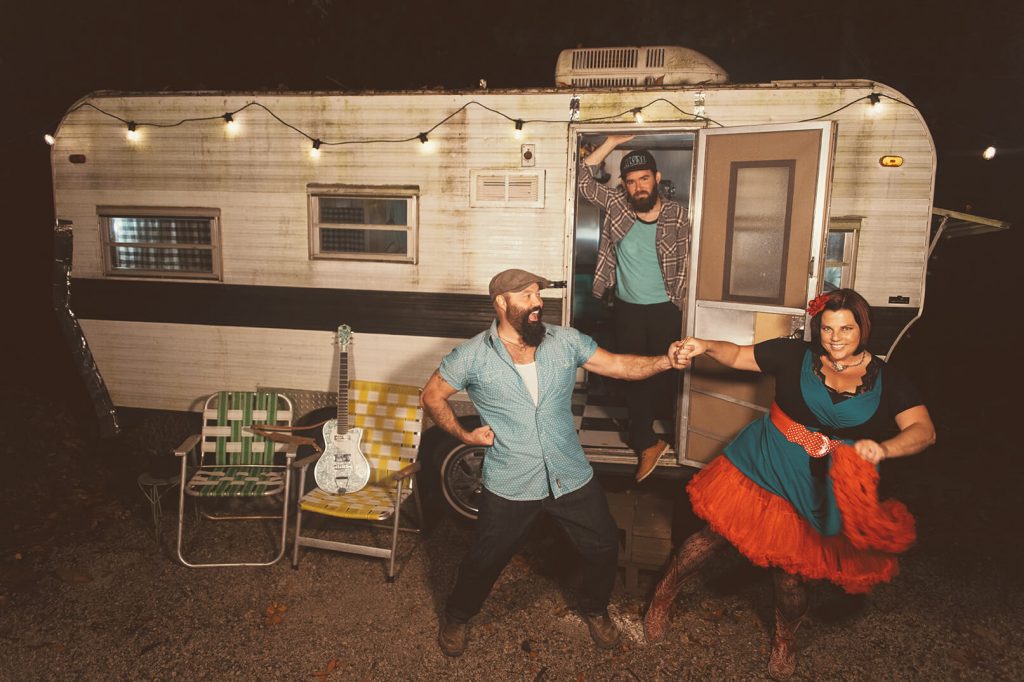 The Reverend Peyton’s Big Damn Band hails from Nashville. Nashville, Indiana that is. They are a proud front porch blues trio who feel the same things that we all feel. True to its title, their new album, Dance Songs For Hard Times was created during some tough times indeed, for the whole world as well as for the band. 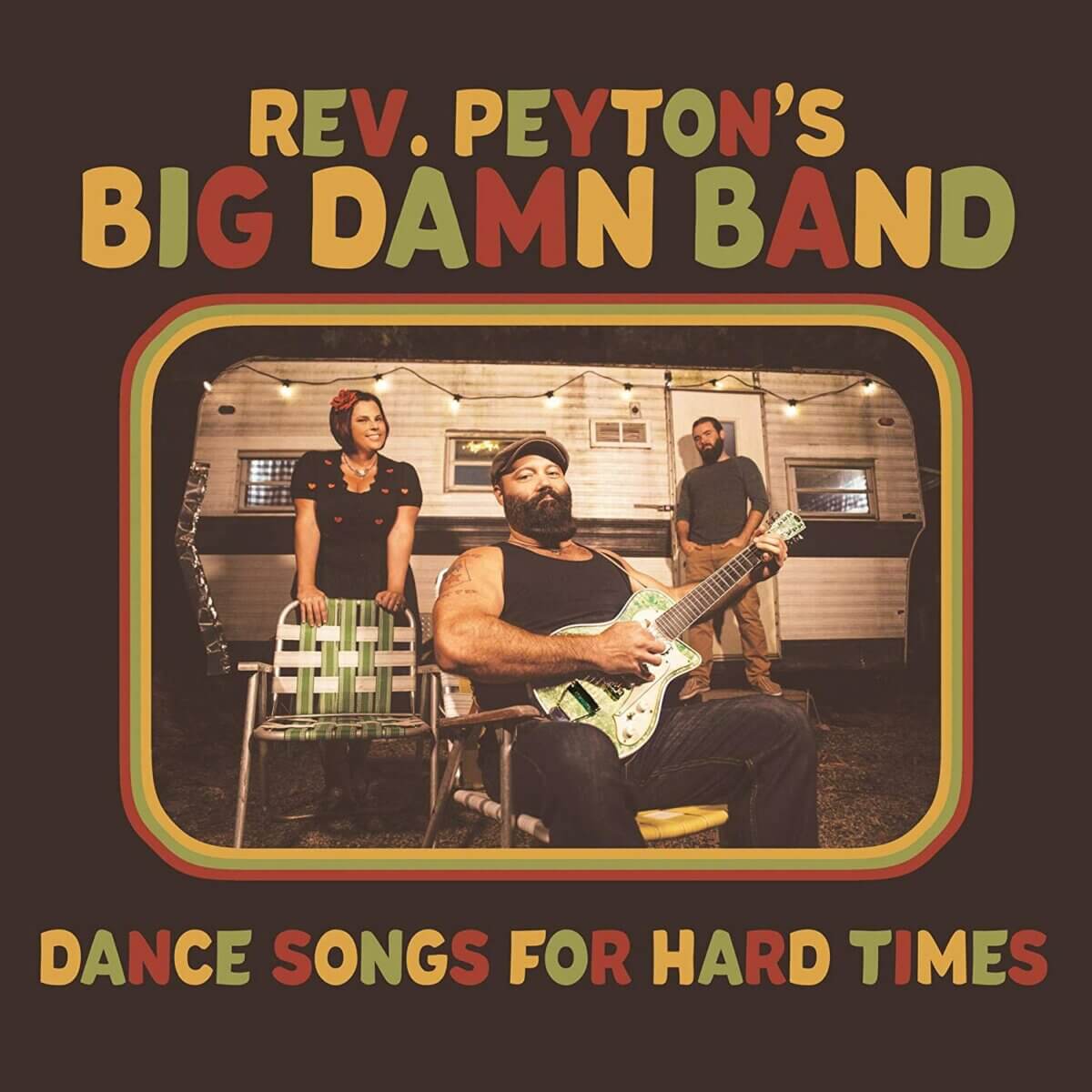 The lion’s share of the album was written by candlelight and then, with the encouragement of 4X GRAMMY-winning producer Vance Powell (Chris Stapleton, Jack White) recorded using the best technology available . . . in the 1950s. Powell’s suggestion was to turn back the clock and record no more than eight tracks of audio to analog tape. Minimal overdubs are heard on Dance Songs For Hard Times, and Peyton sang while playing guitar live in the studio.

The band found itself sidelined from a relentless touring schedule because of the coronavirus pandemic. The good Reverend says he was surprised when his mind and soul unleashed a batch of new songs in March and April of 2020. “I think it was the stress of everything,” he says. “At the time, we were watching everything we know crash down. I didn’t know what was going to happen with our career, with our house, with food, with anything.” Peyton’s wife and Big Damn Band member “Washboard” Breezy Peyton agrees, “It’s been a struggle the entire time. Nothing’s been easy. Other than the music. The music came easy.”

Adding to Peyton’s concerns during the writing process were a lingering illness — perhaps undiagnosed COVID-19 — affecting “Washboard” Breezy, as well as a cancer diagnosis for his father. A metaphorical wallop arrived when unpredictable weather in the rustic wilds of Southern Indiana knocked out power at the Peytons’ 150-year-old log cabin. For multiple days. Hence the candlelight writing sessions.

Scheduled for independent release April 9, 2021 via Thirty Tigers, Dance Songs for Hard Times conveys the hopes and fears of pandemic living. Rev. Peyton, the Big Damn Band’s vocalist and world-class fingerstyle guitarist, details bleak financial challenges on the songs “Ways and Means” and “Dirty Hustlin’.” He pines for in-person reunions with loved ones on “No Tellin’ When,” and he pleads for celestial relief on the album-closing “Come Down Angels.”

But if you think for one second that this is an album full of woe is me sad songs, you couldn’t be further from the truth. For whatever unfathomable reason, Rev. Peyton likes sad songs that don’t sound sad. Follow? Hence the Dance Songs in the title. It all kicks off with the first released single, “Ways and Means.” All smiles and dancing throughout the video, one has to listen to the mournful lyrics of having lots of ways, but no means to hear the message. “The song was written for all those folks who have the moves, the style, the substance, the talent, but maybe not the seed money or the famous last name,” Peyton says. “All those people who had to work extra hard because they didn’t get to start way ahead. Folks who have been playing catch-up since they were born and had to get really good just to make it to zero.”

Rev. Peyton himself is a disciple of the late, great Charley Patton, and like Patton (who used no microphones or amps but could be heard for miles) produces enough power with his guitar and voice to make a puppy pull a freight train. His signature finger-picking style also lends the illusion that there is a talented bassist backing the band, when none exists. Combine all that with his down-home lyrical style, never-say-die attitude, talented wife “Washboard” Breezy, and drummer (and bucket player) “Sad” Max Senteney and what blooms is a rose that could crack a New York sidewalk.

“Rattle Can” is musically just a skosh off from “Hot Rod Lincoln,” and may have folks arguing the lyrics for years to come. The muscly slide guitar mixes with, rather than overpowers Senteney’s drums and Breezy’s signature washboard. “Dirty Hustlin’,” has Peyton giving thought to doing whatever needs to be done to keep the family healthy and financially above water, even if that means “going back to that dirty hustlin’.”

“I’ll Pick You Up” and “Nothing’s Easy But You and Me” are love songs in signature Big Damn Band fashion. No matter what the world throws at them, no matter what may come, Rev. Peyton and Breezy always have one another and that’s enough. “No Tellin’ When,” is a nod to original Delta blues, with Peyton going it alone, singing his woes of loneliness over a sweet, slide guitar.

Things pick back up a bit with “Sad Songs” and the foot-stomping “Crime to Be Poor,” again the lyrics pointing out the inconsistency of the times. “Steal a million dollars and you might get a fine. Steal a pack of gum and you’ll do hard time.” “Til We Die,” reminds me of that scene in Forest Gump when Lt. Dan is screaming at the storm. Peyton and company are figuratively throwing their middle fingers in the air while hollering “bring it on!”

“Too Cool to Dance” is a 50s style rocker with an interesting back story. “I was thinking about all the times where I’ve been somewhere and felt too cool to dance,” Peyton says. “I didn’t want to be that way. Not being able to do anything last year, I had this feeling of, ‘Man, I’m not going to waste any moment like this in my life — ever.’ ”

My personal favorite on Dance Songs For Hard Times is the album’s closer, “Come Down Angels.” It’s Bukka White leading a Sunday morning service. Part Delta blues, part Southern Gospel, it’s a prayer from Rev. Peyton that most surely was answered with this album.

Everyone has been living through hard times for the last year, but Reverend Peyton’s Big Damn Band has taught us that we can be scared, we can be sad, and we can be worried, but a few Dance Songs For Hard Times will help us get through.

As 2020 progressed, Breezy recovered, and Peyton’s father was declared free of cancer following surgery. A new Patreon page helped the band connect with fans and make up some lost wages, and Big Damn Band supporters around the world check in monthly for pay-what-you-can livestream performances that originate at the Peytons’ log cabin. The band has also been nominated for their second Blues Music Award for Best Blues Rock Artist.