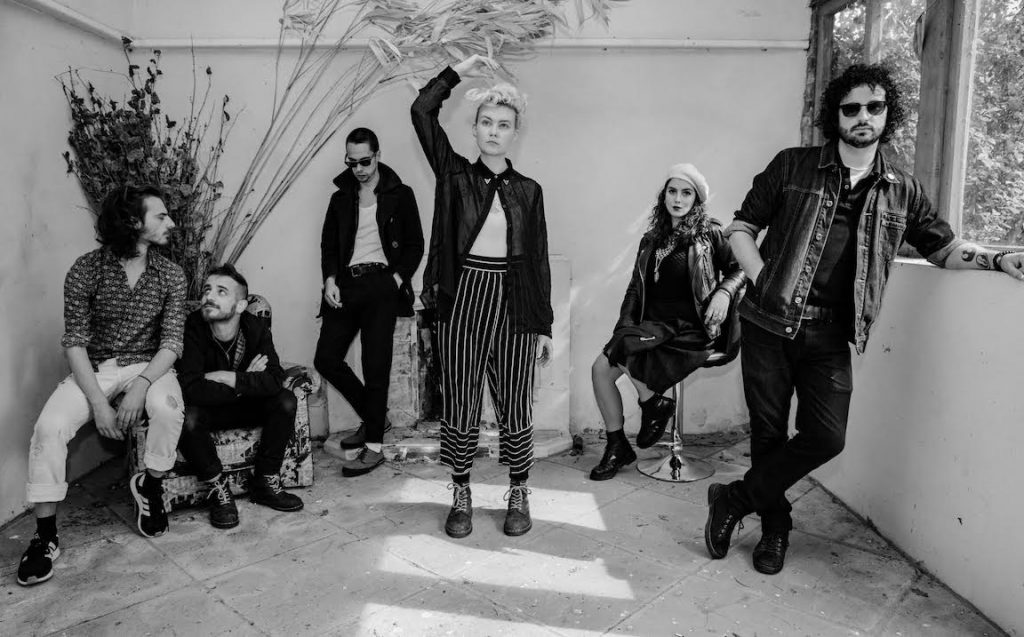 In 2011 this reviewer attended one of the band’s first public gigs in the inauspicious surroundings of a small room in a country pub hosting a dozen locals. It was a short acoustic set supporting the main act, and comprized the three founding members, Conrad Bird, Ruth Patterson and Rosie Bristow backed by a friend on snare drum. What made the trio stand out was the chemistry between them, their passion for music, sense of fun and quirkiness. They were also immensely talented; Conrad could sing and play across a range of styles, Rosie brought the accordion into several genres and this seemed new and innovative, and Ruth was clearly a classically trained violinist with a heavenly voice. “Bluebell Wood” which captured perfectly the mood of springtime in the Northumberland countryside enthralled the audience and no one attending that night could have forgotten the experience.

Fast-forward a decade and it is spring once more but Holy Moly & The Crackers, now a six-piece, are overnight sensations and waiting backstage at the internationally renowned Sage Gateshead ready to perform in its 1700-seater main hall to a virtual audience expected to be even larger. Over the past 10 years, they have increasingly gained popularity as a house-rocking party band playing seriously good music including elements of folk, blues, funk, indie and rock, headlining festivals across Europe. The loyal fan base of ‘holy rollers’ has grown exponentially and followed the band’s journey leading to this ‘New Beginnings’ show celebrating the return to a more normal existence including live gigs, albeit streamed initially.

It may have been virtual but the sense of anticipation for this show was tangible, viewers probably more nervous than the musicians in anticipation of seeing the band on stage for the first time in over a year. Would they be as good as before given they had not even been in a room together since last March? The answer came straight away as Sage Gateshead had provided its customary extravaganza of light and sound effects, the line of six musicians emerging from spectacular red and white smoke plumes engulfing the stage. A barrage of cameras captured the action of the whole band and each musician from every angle in a stunning visual production of star quality.

Conrad spoke from the heart about what it meant to be back, his love and respect for the fans obvious to everyone, and then it was straight into party mode. The first bars of “Sugar” would have been spine-tingling for those watching in their living rooms but now imagining themselves in the front row of the iconic venue, hollering and foot stomping just like they used to. It was the ultimate post-coronavirus booster, Con’s intense, dramatic vocals telling the story, brilliant piercing violin and guitar interludes, and the gorgeous, reassuring sound of the squeezebox, all underpinned by dynamic drumming and pulsating bass.

The extrovert lead singer Ruth Patterson declared to the fans that ‘all we’ve got is you’ as a precursor to the explosive, adrenalin-infused “All I Got Is You.” Ruth has used lockdown to launch a highly successful solo career as a singer, composer and instrumentalist and this experience shone through her virtuosic start tonight. Rosie might have forged several careers recently as an organic farmer, fabric maker, fashion designer and academic but she found time to rehearse the saxophone judging by the hard rocking “Road To You.” This latest single is sensational live with Tommy Evans using a maraca in one hand and drumstick in the other, his confident background vocals reflecting his newly found status as an acclaimed singer in his own right. “Gravel Rag” with its funky rhythm upped the ante further and generated a manic atmosphere despite no physical audience, the constant engagement from the stage helping to maintain a direct connection with the fans partying remotely.

Nick Tyler set the scene for “Sister” with mesmeric guitar riffs and Ruth’s exceptional vocal range. Tyler also caught the eye on a highly anticipated new song, the haunting “Cry Wolf” with its infectious and piercing six string interludes. The ‘rambling and gambling’ country tinged “Loaded Dice” confirmed Conrad’s ability to get a good song out of playing poker with his mates. “Bluebell Wood” nodded back to folk roots and just oozed nostalgia for Ruth and Conrad’s home county. Another blast from the past, from Lilly, the first EP, brought down home authentic blues to the mix with its tale of two bickering drunks, nothing like the two singing the duet. Ruth would later include another impressive blues based song from that recording, “Ain’t No Grave”, Jamie Shield’s rolling bass lines hitting the groove perfectly.

Conrad’s audacious trumpet solo introduced “A Punk Called Peter.” a phantasmagoria of strings, accordion and vocal effects. Rosie’s melodious instrumental, “River Neva” brought a Russian dimension with its Cossack dancing rhythms. A festival favorite song is “Naked In Budapest”, the finger pointed at Tommy now minus his shirt. One can assume the home-based fans were enthusiastically repeating the chorus, ‘We’re not going home,’ each one raising a glass. The closing selection of numbers sounded like the finale of a greatest hits tour starting with the sensational circus inspired song “Upside Down” followed by the mega Hollywood hit single “Cold Comfort Lane,” now heading towards 2 million music streams. The pace of these songs is electrifying and is only possible because of the exceptional quality of the rhythm section.

Evans makes The Who’s Keith Moon look and sound like a sedate drummer with a cocktail bar quartet. Tommy plays around the whole drum kit between the accents with selective use of cymbals, responding constantly to the musicians around him. He works in perfect synchronization with the exceptionally gifted and dexterous Jamie, their combined contribution alongside Nick Tyler invaluable. Nick is similar to guitar legend Peter Green in respect of not overplaying but valuing the spaces as much as the notes and phrases. “Devil And The Danube” was followed by an emotional duet from Conrad and Ruth, “I Will See You Again,” a reminder of better times to come. The show ended with the powerful, rap sounding “Mary” courtesy of Conrad which draws together the band’s many genres and sums up what tonight has been all about: a show with the fans and for the fans, celebrating a decade of sharing special music and looking to the future.

After the show, Ruth Patterson spoke to ABS about the experience:

It was an incredibly humbling and exhilarating feeling to play Sage One, performing on the same stage as some of our all time heroes. As a kid growing up in the north-east, the Sage was always one of those places that young musicians only dreamed of playing. To be able to go out on that stage and perform to so many people even socially-distanced was a truly great experience.

I think we were all quite nervous about how the show would go considering we wouldn’t have the buzz of the audience to feed us with energy, however it made such a difference to chat to the crowd beforehand online and just knowing that there were so many people rooting for us and excited to see us after so long, it really did feel like there was a presence in the room. I could almost see the audience sat in those chairs in front of us! Totally surreal, wonderful experience and we just can’t wait to get back out and see the crowd face to face again – It really has fired us up!

Holy Moly and The Crackers