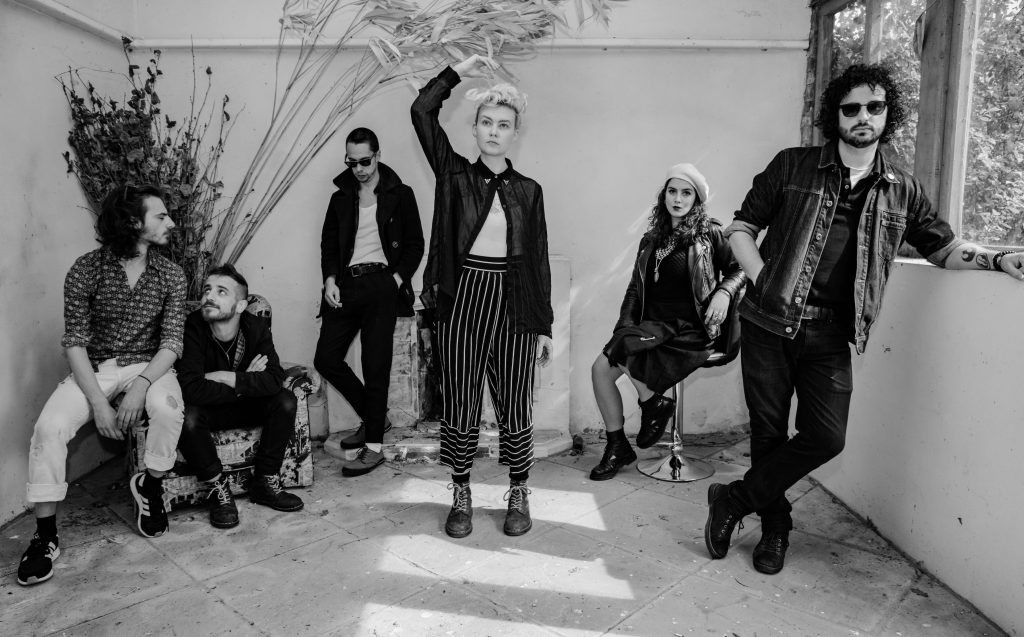 The iconic Sage Gateshead, designed to give perfect acoustic sound in its 1700-seater main hall, is an internationally renowned concert venue with a status the UK equivalent of Madison Square Garden. Mega stars Joe Bonamassa, Herbie Hancock and Sting are just a few of the famous names to have crossed the north east of England music center’s threshold in recent years.

Preparations are currently underway to reopen its doors to audiences again starting with a series of live-streamed shows entitled ‘New Beginnings.’ A party atmosphere to celebrate the way forward from the coronavirus pandemic is guaranteed with the choice of raucous folk-blues rockers Holy Moly & The Crackers to perform on Friday, April 23.

Despite the band’s disappointments of a half completed European tour and the postponement of a prestigious Glastonbury gig alongside numerous other festivals, the past year has also brought successes. Their long awaited album, Live In Europe 2020 was released to critical acclaim and has provided solace for the legion of ‘holy roller’ fans.  Founding member and lead singer Ruth Patterson has launched a brilliant new solo career with several original singles and music videos contributing to her numerous personal awards.

“Somebody Else” made it through to the semi finals of The International Songwriting Competition. Her joint composition, “Upside Down” with co-founder of the band and squeezebox maestro/circus performer Rosie Bristow has reached the final of this competition with voting currently in progress. The third founding member, Conrad Bird built his own home recording studio and is currently utilizing his talents as a freelancer within a booking agency. Drummer Tommy Evans extended his vocal prowess beyond the back line and into solo singing whilst bassist Jamie Shields and guitarist Nick Tyler have also followed other musical opportunities.

Balancing economic survival with the pursuit of creativity whilst maintaining mental well-being during lockdown must have been challenging for all musicians especially those relying on gig revenues and CD sales.

American Blues Scene caught up with all six members of Holy Moly & The Crackers to get some insights into their lives over the past 12 months to find out how they not only survived but prepared themselves for the resumption of their musical careers — including one of the biggest gigs of their lives at the end of this month.

2020 in the back of a van returning from an early-ending tour, I landed a 9-5 job and started on lockdown day one! The past year since then I’ve been promoted in my lockdown job, writing music for myself, and engaging in my other hobby of carpentry with some restoration work. I’ve also taken the downtime of no touring to work on both my mental and physical health in preparation for the road life again!

Somewhere between lockdowns I got bored and ran away to Spain. I’ve been volunteering at a retreat in the mountains of Andalucia called Orarca Techno Zen Centre, as a gardener, sous-chef and artist in residence. As well as this, I’ve been writing songs for a solo EP which I hope to release later this year, and remotely working with the creative, experimental Alphabetti Theatre and local composer/musician Ceitidh Mac on the sound design for a play called Sucking Eggs (premiering this June). Back in the toon (Newcastle upon Tyne) I’ve been building my dream guitar and can’t wait to get back to gigs!

I’ve spent the past year at home in Newcastle; reading, reflecting and writing songs. I’ve launched myself as a solo artist after I was picked to participate in Sage Gateshead’s Summer Studios program which is a free residency for music creators to develop their practice and to film a live session. I have since played my first headline show (live-streamed) and performed on ITV news! I have also figured out how to use social media, ten years behind everyone else in a bid to adapt to the new world!

First half of 2020 = meltdown. Second half = learning how to record and produce. 2021 = job as a booking agent with the international Midnight Mango (I’ve gone to the dark side!). Bring on the future.

I am a natural born hibernator so the first bit of lockdown was actually pretty nice being forced to stop and spend time recovering from an intensive few years touring, pottering around pretending to know how to DIY and actually just making a mess. Quickly got bored of that though and flung myself into solo work which is going pretty well and after one lockdown music video filmed in our bathroom, released for my second solo single last year, we decided to make another lockdown music video in the living room before this fully ends so keep a look out for that coming out soon! Me and Con also turned our spare bedroom into a recording studio so we’ve been doing lots of writing, recording and producing ourselves. Looking forward to getting back out into the real world again, I MISS PEOPLE!

After a week of lockdown, I realised sitting in my tiny Newcastle flat being consumed by existential plague dread and mourning our cancelled tour and festivals was not how I wanted to spend my life. I packed up my wellies, accordion, dungarees, and best sun hat and got three trains through eerily empty stations to Flourish Produce in Cambridgeshire. At the farm I fell in love with the smell of tiny seedlings coming to life in the propagation tunnel, pruning the monstrous sweet peas, harvesting broccoli at dawn, playing music round the bonfire. Nicky (our guitarist) joined me for a couple of months, and it was very surreal whiling away muddy days picking courgettes together instead of running about nightclubs and festival tents covered in glitter. My farm obsession grew, and I was volunteering on my days off at CoFarm community garden and at a flower farm, as well as organising a trip to see George Young’s hemp and flax fields and learning to process flax at Flaxland. I resolved to spend the next year farming to see if I loved it as much in January as I had during the summer.

After giving away most of my possessions (owning lots of books and sparkly outfits isn’t very useful when you’re living out of a backpack on a farm) I moved to Scotland to be closer to my family and have been volunteering at a small holding on the west coast and then Phantassie Organic Produce since October. Autumn on the farm was a joy, I picked apples and pumpkins and learnt an extract of Marriage of Figaro to accompany an opera singer who lives in the farm gatehouse with his 8 chihuahuas. Winter was hard in a character-building way, I got good at splitting logs and making kindling with a blunt axe and stared at the moon and stars a lot during my nighttime trips to the long drop.

In the new year I fully committed to my new fascination with growing fibre plants and started an MSc degree in Fashion and Textile Management online whilst still farming two days a week. I also started a new farm band with the techno producer/tree surgeon living in one of the barns, and the fresh spring farmhands who all happen to play instruments. So currently I’m busy trying to dismantle the global fashion supply chain by growing and processing a hectare of flax into fabric and jamming in the Space Barn in the evenings. If the music industry somehow does re-open, I might be preoccupied harvesting flax/becoming a research academic, but I like being busy so I’m sure we’ll figure it out.