Editor’s Note: As an ordained minister, who also works as a DJ in a gentleman’s club, I’m often asked how I can justify the combination of those two worlds. Simple. The people therein are my flock. I not only provide music, but also occasional assistance with personal problems and spiritual guidance. JC himself hung out with prostitutes, tax collectors, and all manner of people considered sinful. Not that I am comparing myself to Him, but rather to Reverend Freakchild, who is able to bring the Good Word, sometimes irreverently, to those who may need it most.

For over 20 years Reverend Freakchild has been directing his musical ministry to the legions of fans, who have followed the Grateful Dead and all its offspring with music that is inspired by the jam band forefathers and its members. The Rev. spent three years off-off-off Broadway singing blues and spirituals on Sundays at Tobacco Road, the now defunct NYC hippie hangout replete with drug addicts, hookers,and music freaks. The Rev. has also served as a member and featured soloist of the Metro Mass Gospel Choir performing at such venues as Carnegie Hall, Avery Fischer Hall and the Town Hall Theater.

Upon finding the world in our present crisis, the Reverend decided to cast his net wider and minister to a larger flock of blues and roots seekers. His latest release, Supramundane Blues, is a collection of 13 gospel favorites and songs inspired by faith and the quest for divine enlightenment that runs the gamut of styles from Delta Blues to funk, soul, modern jam band, rock, and Americana. 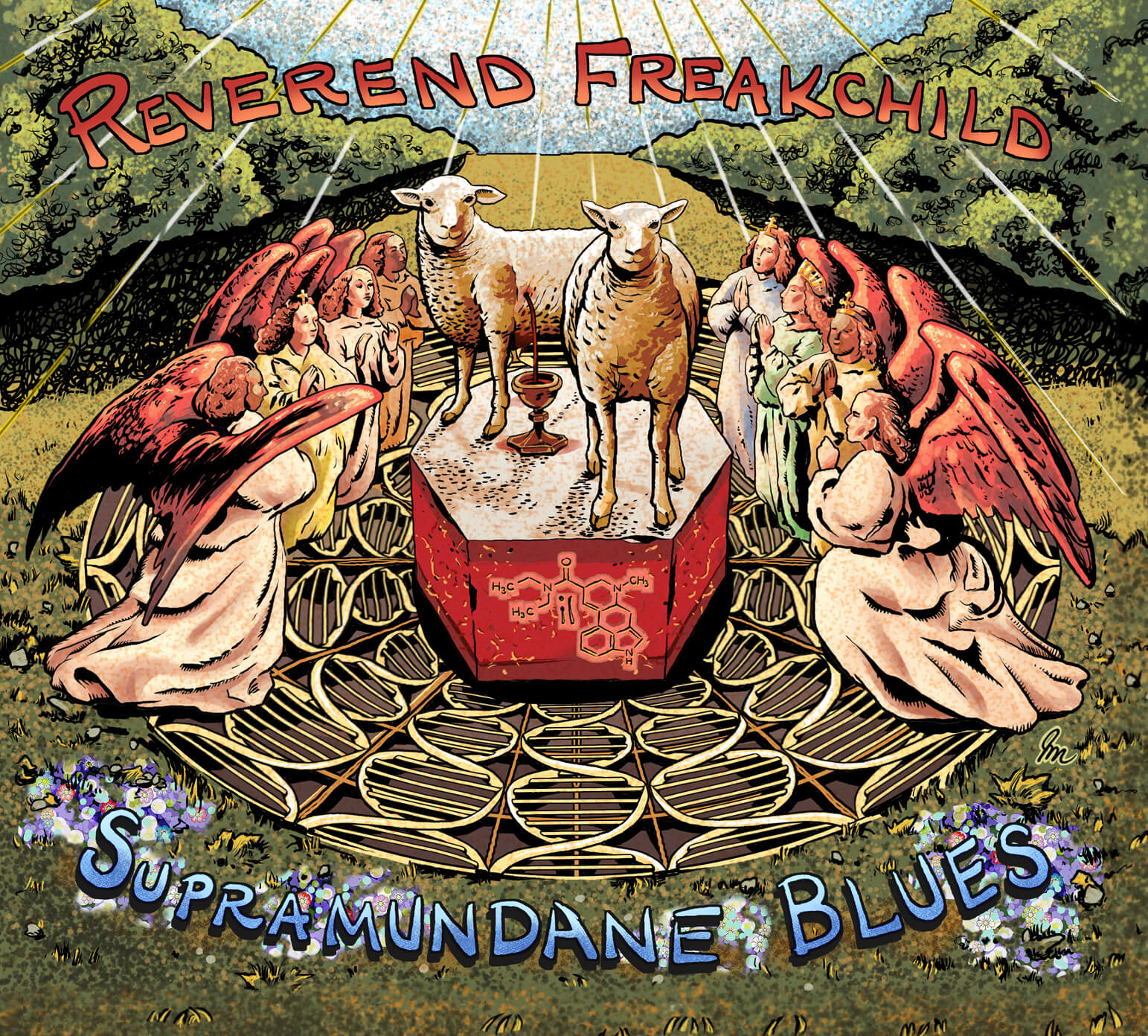 Supramundane is defined as being or situated above the mundane world; transcending our system; celestial. What the Rev. has done with Supramundane Blues is to take songs we all know, and turn them on their respective ears, many times making them even more listenable. Therefore making them transcend our usual system of listening into something more celestial than the commonplace.

It all begins with the solo acoustic number, “Preaching the Blues.” With the Rev. solo on resonator guitar and slide, he preaches in a loud, powerful voice, Delta style. It’s followed by “Crying Holy,” the Bill Monroe bluegrass call to pray that’s been electrified. Imagine the Bluegrass Boys backed by Dwight Yoakam’s punk rock meets Bakersfield sound. It’s amazing.

The third, and most surprising track is Freakchild’s cover of Depeche Mode’s “Personal Jesus.” Now I’ve heard the original, and covers by acts including Marilyn Manson and Johnny Cash, but the Rev. plays it with some heavy duty reverb, and overblown harmonica (provided by The Reverend Shawn Amos). We’re treated to a greasy, danceable, shuffle version that insists on being played over and over.

When asked, what do you mean by preaching the blues, Reverend Freakchild responded, “there were many early blues musicians, like Reverend Gary Davis and Son House, who were either preachers, who became bluesmen or bluesmen, who became preachers. For them there wasn’t much of a line between Saturday night and Sunday morning. That’s what my music draws on.” He proves his point with the shift from “Personal Jesus,” to the creatively back-masked opening to Blind Lemon Jefferson’s 1928 classic, “See That My Grave is Kept Clean.” It’s upbeat, and rousing, reminiscent of Gov’t Mule, with some killer lap steel coming in over the top of the Rev’s resonator. On Albert King’s “Everybody Wants to Go to Heaven,” Freakchild turns it into a 70s style, James Taylor-esque folk song. I think you can see the pattern developing here.

True to form, Reverend Freakchild adds some “irreverent” verses to Blind Willie Johnson’s “Soul of a Man.” Again, the hint is in the lyrics on what the Rev. is attempting to accomplish with this release. It’s not just Gospel that Reverend Freakchild is preaching. It has suggestions of Buddhism, Hinduism, and even non-denominational AA prayers. The progression continues when Freakchild’s guitarist/meditation teacher Kevin Griffin joins him on the spoken word piece, “Factors of Awakening,”

“Jesus Just Left Chicago,” is transformed from 12-bar blues to devotional Gospel with some more great harmonica arriving right on time. On the traditional “Good Shepherd,” Mark Karran takes over lead guitar duties adding some balls to the 60s psychedelic version Jefferson Airplane offered us over five decades ago. The orthodox Southern Gospel tune, “Working on a Building,” is given over to full-fledged funk, and Reverend Shawn Ames joins in again adding gritty vocals and harmonica to the Southern stomping, sardonic Gospel of “Keep on Praying.”

The final track, “Seven Billion Light Years Old,” was completely unexpected. First off, the track weighs in at over sixteen minutes, at least four times longer than any other track on the album. Secondly, it’s a combination of over a dozen songs, prayers, Gospel readings, quotes from the Dhammapada, and more. The eclectic instrumentation begins with effusive harmonica a ‘la Sonny Terry, over keyboards reminiscent of The Who. As the “song” progresses, one can pick out bits of “Plastic Jesus,” quotes from Albert Camus, Elwood Blues, and Woody Allen, electric guitars, Beatles-esque back-masking, “Fast Car,” a dial-up modem, cuts from previously released Reverend Freakchild songs, and if I’m not mistaken, a didgeridoo.

After the global catastrophe that was 2020, I never thought that my favorite album coming out post-apocalypse would be a “religious” offering. Yet, here we are. Supramundane Blues by Reverend Freakchild is one that I’ll be listening to again and again. It’s a combination of all I love in the blues world and then some. I’ll go out on a limb and bet a nickel that it will be one of your favorites as well.