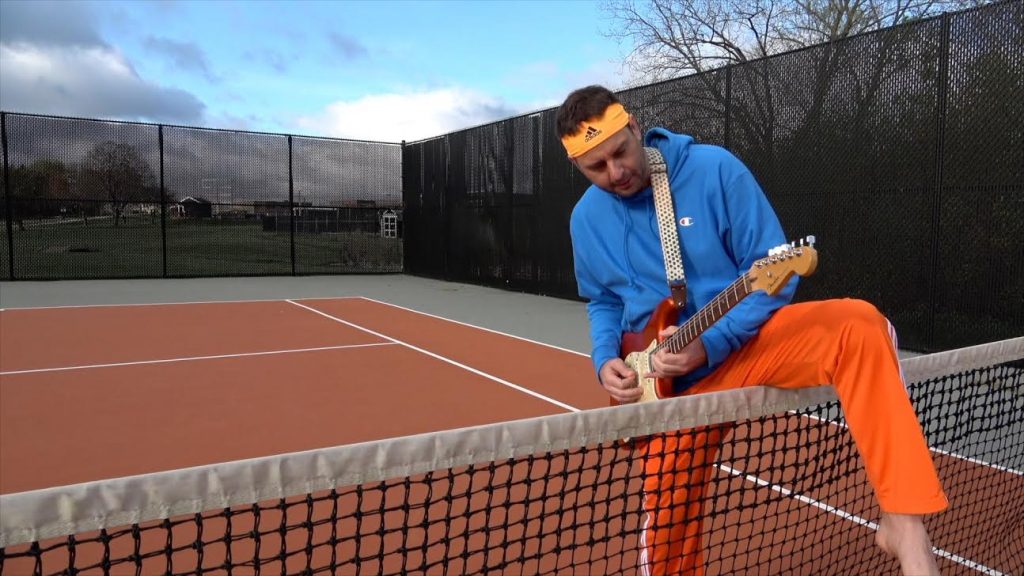 Buckley has announced that his latest album, Times Strange, will be released Tuesday, May 11.

Of the new album, he tells ABS:

The ‘Times Strange’ album revolves around my song “Nerve Damage Blues,” a tennis song. Tennis has always been a huge part of my life and I began playing at the age of six in Costa Rica. Upon coming back to the states, I started taking lessons and playing tournaments. High-school tennis was amazing and I always did very well. I gave up a division one tennis playing career to go to The Berklee College of Music in Boston to study Songwriting. After graduating, I spent a few years in Philly playing music out nightly and teaching music and tennis. I realized I was going nowhere fast and needed something full-time so I decided to get USPTA certified in Long Island, N.Y. at The Port Washington Academy which was the tennis club John McEnroe used to play at.

I found work at a prestigious club in Chicago and I made the move. I figured it would be great to teach tennis, really dive deep into the Blues, and be in a new city. After a year of teaching, my right foot gave way and snapped during an on court hitting lesson. I then went through 8-10 doctors who couldn’t diagnose me. The last doctor I saw on workers compensation was a hired gun and said I was lying in his final report and said I was ready to go back to work. I even brought my parents in his examination room, because I knew something was off. After this, I found a great foot/pain doctor who finally gave me a diagnosis, Neurapraxia of the calcaneus foot branch. Also, there were some other nerves injured. He said from the year of teaching it was like a hammer had repetitively hit the nerves and then the injury happened. He was the first doctor who really knew and explained the seven main nerves going through the foot and what was going on. He said it was a three year fix.

It took me about four years to heal correctly. A lawsuit later, I wrote Nerve Damage Blues about the whole experience. During the process: I lost my job, money, and sold my car. It gave me some real bad deep blues. I can relate in a small way (but not fully) as to why a lot of the old Blues originators had tears in their eyes and would wear sunglasses. In hindsight, the injury had to happen to really learn the Blues. I came to Chicago to learn the Blues, and that’s exactly what I got.

The “Times Strange” song is an ode to the Delta Blues Masters — in particular Skip James. I have gone to all of the old Blues Graves in the Chicago area: Muddy Waters, Big Bill Broonzy, Jimmy Reed, Howlin’ Wolf, and Willie Dixon. Their ghosts and shadows are my teachers. I wanted to create something very haunting and ghostly in a Bluesy kind of way. The only two Blues guys that I am aware of who have done this are Skip James and Robert Johnson; there is another non human entity on their Blues recordings. If you really are aware and open you can hear it. There is such an eerie beyond spooky haunting sound that takes part with the recording.

That is the ghostly energy I tried channeling and had to really put myself into a very deep trance state to get there. I am not sure if Skip James or Robert Johnson consciously did this when recording. It is up to the listener to hear if I achieved what I was going after. I tried my best.

*All images courtesy of Brant Buckley