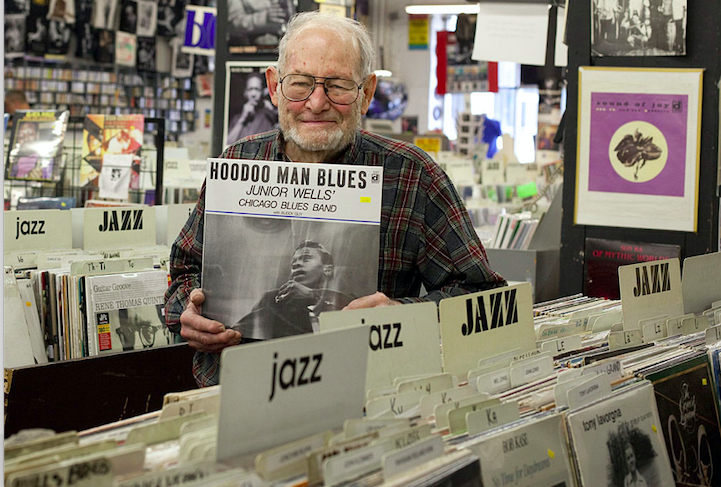 Bob Koester, founder and owner of the jazz/blues indie label Delmark Records and longtime owner of the iconic Jazz Record Mart, has passed away on Wednesday, May 12, 2021. He was 88 years old. According to son Bob, he died from a stroke while in hospice care.

Born in Wichita, Kansas, Koester grew up at a high point in big band jazz, collecting and trading records in high school. He subsequently moved to Saint Louis University to sell records by mail order from his dorm, and eventually became a founding member of the St. Louis Jazz Club, where he met fellow audiophile Ron Fister. The two opened a record store called K&F Sales, which later became Blue Note Record Shop. Koester and Fister split their business after not even a year together, and Koester founded Delmar from there, on Delmar Blvd.

Koester moved to Chicago in 1958 and purchased Seymour’s Jazz Mart from Seymour Schwartz in 1959. In 1963 he relocated the Jazz Record Mart and Delmark Records to 7 West Grand Avenue. And in 1971, he purchased property located at 4243 N. Lincoln Avenue where he moved Delmark.

In 1996, Koester was inducted into the Blues Hall of Fame. In May 2018, Koester retired and sold Delmark Records to Julia A. Miller and Elbio Barilari, two musicians from Chicago. The sale included Delmark’s subsidiary labels, CD and LP inventory, the catalog of masters, and Riverside Studio.

Founder of Chicago’s Alligator Records label Bruce Iglauer, who began his career as a shipping clerk at Delmark in 1970, once said, “The fact is that he opened the door for a lot of people, and I don’t think he has ever got the recognition he deserves for being such a seminal figure.”