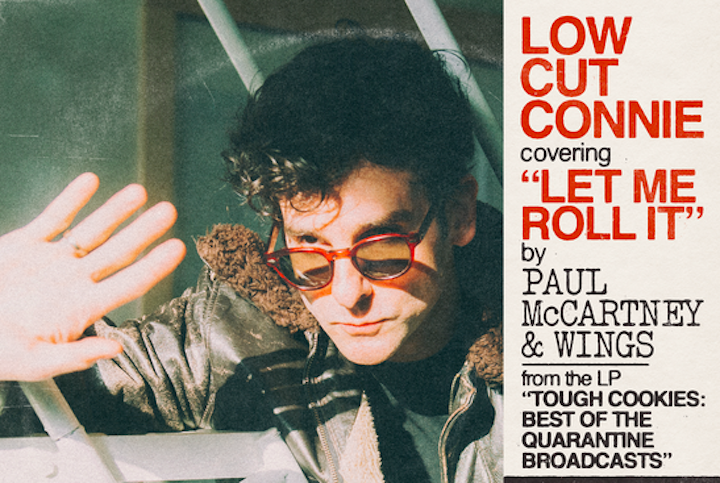 Today, Low Cut Connie shares a cover of Paul McCartney and Wings’ “Let Me Roll It” from his upcoming record Tough Cookies: The Best of The Quarantine Broadcasts, an album of cover songs pulled from Adam Weiner and guitarist Will Donnelly’s twice-weekly Tough Cookies livestream show recorded out of Weiner’s South Philadelphia home.

The 23-track album includes songs by Prince, Cardi B, Madonna, David Bowie, Bill Withers, CSNY, and many more. The album will be released on May 19 digitally and on vinyl and is now available for pre-order.

“Let Me Roll It” is the third single off the Tough Cookies album following covers of INXS’ “Need You Tonight” and Lana Del Rey’s “Video Games.”

“Paul sang his ass off on this one,” states Weiner. “It was a ton of fun to take a swing at it. That’s a soul song right there.”

Last week, Low Cut Connie partnered with The Rock and Roll Hall of Fame for another special episode of Tough Cookies featuring an interview with Nancy Wilson of Heart. The Rock Hall also partnered with the band earlier this year for an episode featuring interviews with original members from Sly and the Family Stone.

This year they were invited to perform the Private Lives track “Help Me” for The Late Show with Stephen Colbert’s #PlayAtHome series, which aired on March 19 to commemorate the 1-year anniversary mark of the first “Tough Cookies” broadcast.

The band recently announced a batch of east coast tour dates for the Fall with more to be announced soon. See details below.

Tough Cookies: The Best of The Quarantine Broadcasts tracklist