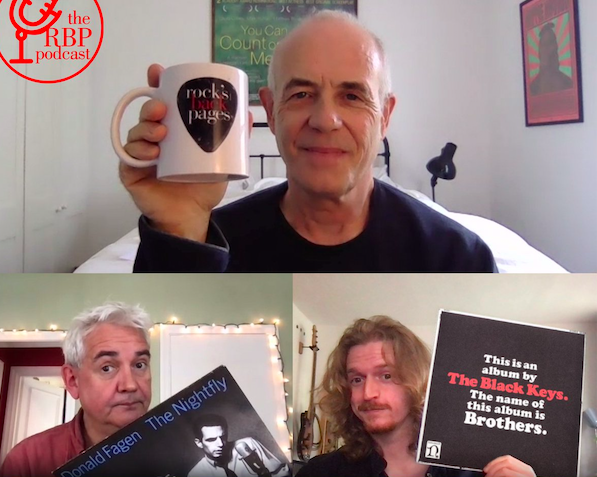 Founded in the fall of 2001 as a way to archive music journalism, the subscription-based rocksbackpages.com has become the largest online database of its kind, with almost 45,000 articles from publications like Creem, Trouser Press, Rolling Stone, New Musical Express, Melody Maker and MOJO, and dozens being added to the site each week. The site also contains more than 700 audio clips from interviews with musicians and music industry people that had never been previously available to the public. In advance of crossing the two-decade mark, its accompanying podcast, also named Rock’s Backpages, has reached a milestone of its own with the release of its 100th episode this week. It is available to listen for free on all major podcast platforms.

Rock’s Backpages podcast started as a way to shed light on the articles and audio clips added to the site every few weeks in a 10-20 minute conversation between editorial director Barney Hoskyns and chief archivist/production director Mark Pringle. With the addition of marketing/communications manager Jasper Murison-Bowie, the podcast quickly expanded into a one hour plus format that includes guests (usually, but not limited to journalists) on every episode telling personal anecdotes about their lives in music.

Guests have included former music writer-turned-rockstar Neil Tennant of Pet Shop Boys (episode 63) telling the story of how he was so nervous when he interviewed Marc Bolan of T. Rex in 1975 that he didn’t turn on his tape recorder (Bolan did it for him), and Disc and Music Echo reporter Caroline Boucher (episode 94) recounting Richard Branson’s attempt at signing Captain Beefheart to Virgin, and botching it by mentioning his intention of also signing Beefheart’s nemesis Frank Zappa. One of the more notable stories to come out of Rock’s Backpages podcast early on was NME journalist Keith Altham (episode 21) describing the time he spent traveling from the UK to the Monterey Pop Festival with Jimi Hendrix and how he convinced the soon-to-be legend to set his guitar on fire, arguably altering the course of popular music.

“From the beginning we wanted it to be personal,” says Jasper Murison-Bowie. “We wanted it to be a conversation addressed to an individual listener on friendly terms with an eavesdropping style. It’s great to see how far we’ve come. We started getting guests on and that’s been super. A hundred episodes later, here we are having a good laugh.”

Listen to the 100th episode, in which the podcast’s power trio wish a happy 80th birthday to contributor Keith Altham, express their deep appreciation for his support over the past 20 years, and discuss three of his 450 pieces on RBP. They also talk a bit about the Black Keys, R.L Burnside & the North Mississippi hill country blues sound that inspired the Keys’ new Delta Kream album. Clips from a 1991 audio interview with Donald Fagen prompt conversation about The Nightfly, the Rock & Soul Revue, and the all-round greatness of Steely Dan.

ABOUT THE HOSTS OF ROCK’S BACKPAGES PODCAST:

A writer and editor for over 30 years, RBP co-founder Hoskyns is also the author of many books, including Hotel California: Singer-Songwriters and Cocaine Cowboys in the LA Canyons, the Tom Waits biography Lowside of the Road, Trampled Under Foot, an oral history of Led Zeppelin, and Small Town Talk, a history of the music scene in Woodstock and Bearsville. A former U.S. correspondent for MOJO, Hoskyns has contributed to Vogue, GQ, Rolling Stone, Spin, Harper’s Bazaar, Uncut and many other titles. Thoughts of Chairman Barney can be found (and books bought) at barneyhoskyns.com

RBP co-founder Pringle has a chequered past including a stint as a musician with mid-’80s retro soul outfit Hot House; graphic designer; portrait photographer. In 2003 he curated Yes Yes Y’all, an exhibition about the first decade of hip hop (’72-’83) and, these days, when he’s not covered in 50-year-old newsprint (it never dries) he now plays Free Rock™ with drummer pal Tom Fenner.

Jasper has written about jazz, funk and electronic music for Under City Lights and The Playground. While studying philosophy at University College London, Jasper hosted a radio show, Making Waves, about the genre future bass, which ran for three years. As a saxophonist and pianist, Jasper has played in venues including the Adelphi Theatre, the Bishopsgate Institute and Camden People’s Theatre. In 2015, he held a residency at Tredwell’s restaurant in Covent Garden, playing jazz and freely improvised music. He has also spent some time behind the decks at clubs in Oxford. His photography, writing and music can be found at jasperbowie.com.