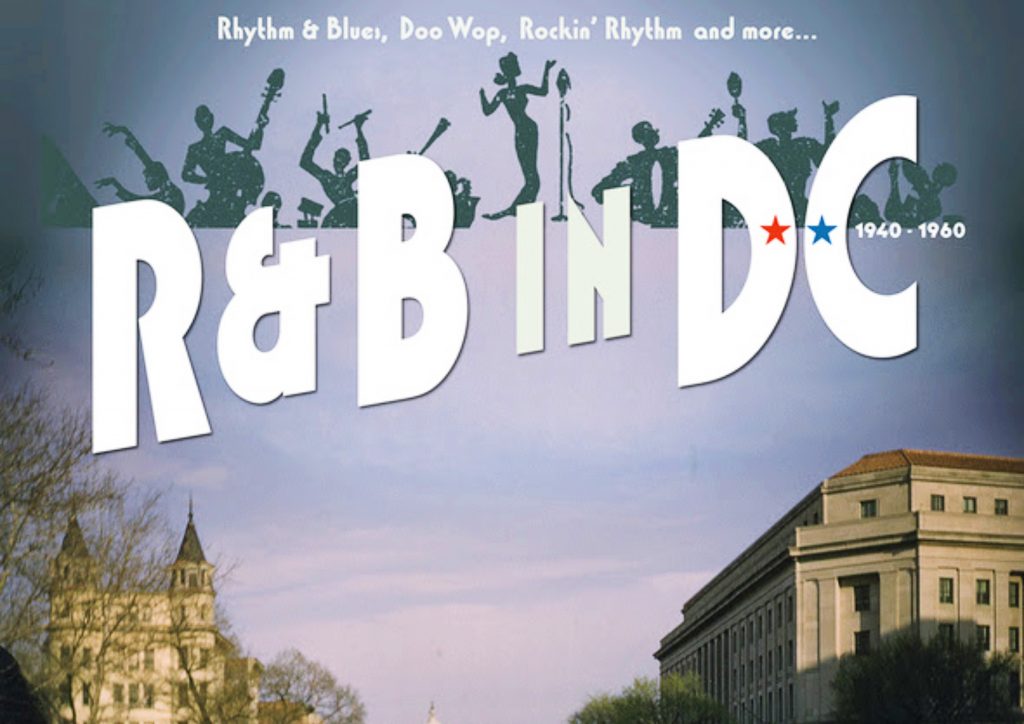 The Washington, D.C. region has long been home to many talented vocalists and musicians, yet with no major record companies based there, this home-grown talent has never been properly promoted and recognized. The forthcoming Bear Family Records set R&B in D.C. 1940-1960, due out September 10, 2021, celebrates local performers who never made it big, but who made some really great records for local and regional companies. Washington did have R&B stars such as The Clovers, Don Covay, Billy Stewart, Marvin Gaye, and Van McCoy; however, when those acts were finally able to break out onto the national and international stage, they were associated with record companies and musical trends distant from their start in Washington. 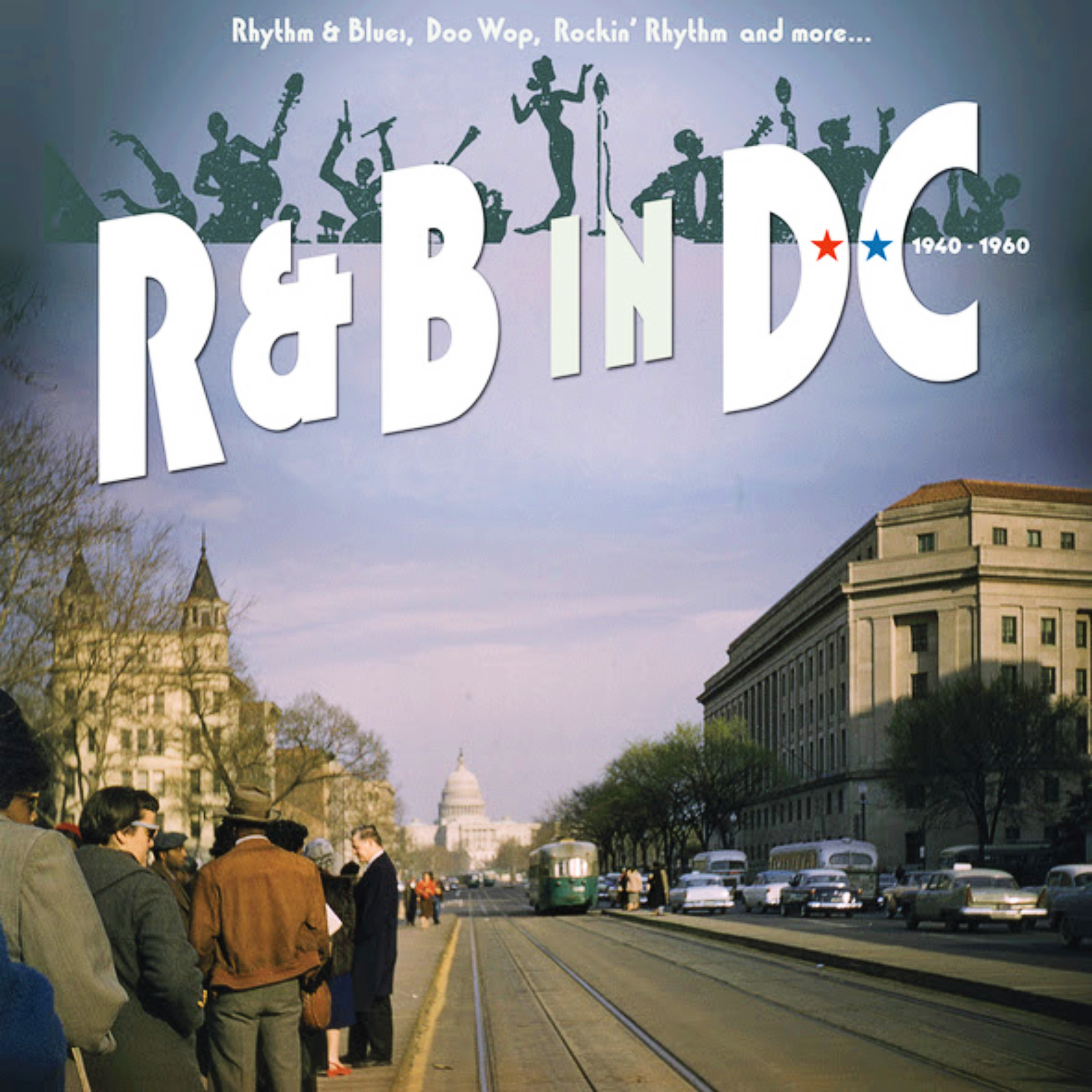 In assembling the release, music researcher and radio host Jay Bruder begins the process of setting the historical record straight by discovering the ties that linked the local musicians and vocalists with the music teachers, club and theater operators, and record company owners who tried to bring the R&B, rock ’n’ roll, and doo wop sounds of Washington to the world.

The set unapologetically focuses on vintage records that were the lifeblood of popular music in postwar America. Since the 1970s, Bruder has scrounged used record stores, flea markets, yard sales, and record collector swap meets looking for rare titles by Washington artists. Many collectors loaned one-of-a-kind discs to complete the project. Hundreds of rare records, for which no original master recordings survive, were painstakingly transferred and restored by audio engineer Doug Pomeroy to bring out the best sound possible.

Bruder spent countless hours in libraries reviewing microfilm of the local newspapers for details on artists, recording dates, and live performances. In hundreds of phone calls and in-person visits, he interviewed the surviving artists and record men and women of the Washington region. This information has been transformed into a comprehensive narrative of the time, the place, and the players.

As one example, Bruder told us this:

Mrs. Lillian Claiborne of DC Records moved into the R&B field with great deliberateness in the early 1950s. One of her Washington, D.C. discoveries was a vocal group called The Heartbreakers. She was able to secure a contract for them with RCA Victor. “Wanda” is the flip side of their signature release “Heartbreaker.” Upon release it was seen as more pop than R&B. Today it might be classified as Exotica, given Frank Motley’s moody trumpet backing. Neither side of this disc caught the public’s ear and today it is considered a trophy record by vocal group collectors.

The book opens with short histories of recording and record-making in Washington, from the days of the first talking machines in the 1870s up to the independent record companies of the 1940s and 1950s. Colorful characters such as Lillian Claiborne of DC Records, Ben Adelman of Empire Records, and Bill Boskent of KRC Records come to life in detailed biographical sketches. (Both Claiborne and Adelman were also active in hillbilly music and involved in the early stages of the careers of Patsy Cline, Jimmy Dean, and Roy Clark.) Bruder tells of how in 1946 Ahmet Ertegun, the soon-to-be legendary founder of Atlantic Records, teamed with fellow a jazz fan, Herb Abramson, and the owner of the Quality Music Store, “Waxie Maxie” Silverman, to release their one and only Quality label 78 rpm single. Stories follow about the African-American presence on Washington radio and TV, from announcers and disc jockeys in the late 1940s such as Hal Jackson, Cliff Holland, John Massey, Tex Gathings, Hoppy Adams, “Lord Fauntleroy” Bandy, and Bob King, to the rise of Black-interest radio in the early 1950s. Bruder documents the July 1953 launch of Bob McEwen’s Capital Caravan, one of the earliest televised music and teenage dance shows featuring Black musical talent and dancers. McEwen’s little-known house band, The Three of Us Trio, are featured with their dynamic recordings that mix elements of jazz, R&B, and rock ’n’ roll.

R&B in D.C. places the Black music community in the context of life in segregated Washington, with vignettes on the weekly African-American press and the theaters, night clubs, and restaurants that featured live entertainment, as well as the summertime venues such as the Potomac River cruise boats, countryside picnic grounds, and the segregated beaches on the western shore of the Chesapeake Bay. Specifically, Washington’s Howard Theatre, the north-south gateway on the East Coast vaudeville circuit, attracted major talent, and a stand-out performance at the Howard could make a new star. Many more venues, including road houses and unlicensed bottle clubs, rounded out the nightly entertainment opportunities. Legendary establishments such as the Crystal Caverns, the Murray Casino, the Brass Rail, and the notorious Club Madre (after underworld legend Odessa Madre) all made Washington a top entertainment destination. Even tiny Cecelia’s, a bar and boarding house adjacent to the Howard, became home base for many of the artists who passed through Washington over the decades. The stories of these establishments are woven into the narrative, along with the schools, churches, and amateurs shows that were the springboards for Washington’s young talent.

In the late 1950s national hitmakers relocated to Washington and helped to develop the local record scene. Bo Diddley nurtured the talents of Little Bobby Parker and Billy Stewart as solo artists. He also helped Marvin Gaye, Reese Palmer, and Chester Simmons and their group, The Marquees. Each would go on in the 1960s to make their own mark: Parker as a guitar and vocal talent, Stewart and Gaye as star vocalists, Palmer as a vocal group coach and historian, and Simmons as a behind-the-scenes record promotion man. Likewise, Lloyd Price moved to D.C. after his stint in the U.S. Army and with Bill Boskent and Harold Logan founded KRC Records. With a song called “Just Because” he opened a new phase in his own career at a time many of his peers were giving up. He recorded this national hit in Washington, and he help boost the fortunes of younger local artists such as Little Sonny Warner and Stella Johnson.

More than 100 artist biographies for the package were carefully assembled from interviews, public records, and contemporary press accounts. Performers such as Delores “Baby Dee” Spriggs, Elsie ‘Angel Face’ Kenley, Three B’s and Honey, and The Crawford Brothers, who until recently were biographical blank pages, come to life in detailed life stories.

Four expert editors with extensive backgrounds in the history of American popular music helped Bruder keep the narrative accurate, relevant, and well-grounded in the music of the postwar era. John Broven, a founding contributor to the venerable Blues Unlimited magazine in 1963, is best known for his definitive music histories Rhythm and Blues in New Orleans and South to Louisiana (both now in second editions). Dan Kochakian is from the Whiskey, Women and . . . blues fanzine and later the U.K.’s Blues and Rhythm magazine. Colin Escott is the Grammy-winning Hank Williams biographer and author of more than a dozen books and numerous music projects; he is also an expert on Sun Records and the legacy of Sam Phillips. He was the co-writer of the Tony-nominated Broadway production Million Dollar Quartet. Dick Lillard, a long-time Washington-area radio program director, newsman, and disc jockey, provided personal observations from his years growing up in Washington, and provided painstakingly researched details from the regional record charts of Billboard and Cash Box that have never been otherwise compiled and published. Three veterans of the R&B years in Washington — drummer T.N.T. Tribble, vocalist Reese Palmer, and vocal group coach and historian Lawrence Berry — all deserve recognition for the time they spent recounting the history of this period to the author and to other researchers. Sadly, these three did not live to see the set’s release.

Mychael and Evelyne Gerstenberger applied their graphic design and editorial skills to produce the set’s gorgeous book, cross-indexed for artists, song titles, and CD track lists so finding a particular piece of music or biographic sketch is a snap.

The project began in May 2014 when Richard Weize, then president of Bear Family Records, approached Bruder about producing a six-CD overview of R&B from Washington. Seven years and 16 CDs later, here we are with a comprehensive package celebrating that mid-20th-century music community. R&B in D.C. 1940-1960 is a voyage of discovery waiting for you to make it happen.