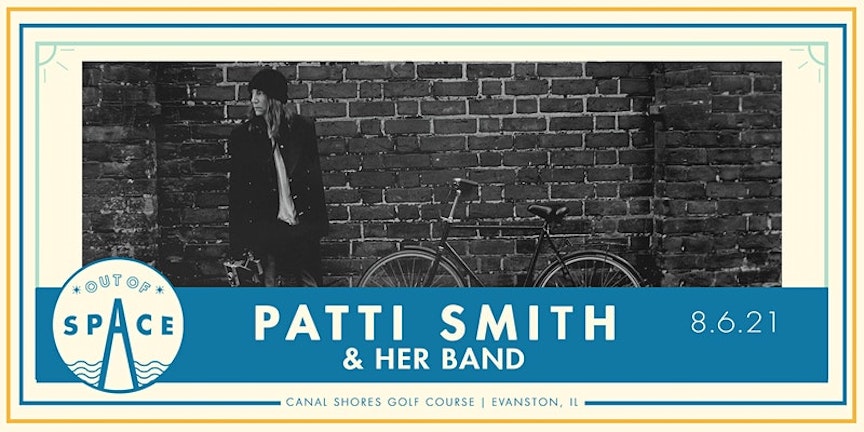 After the long, lost, lonely winter, the sun is out in Chicagoland and live music is on the way back. Evanston SPACE’s summer concert series, Out of Space, unveils the 2021 line-up at Canal Shores (Aug 5-8) and Temperance Beer Company (Sept 2-5). 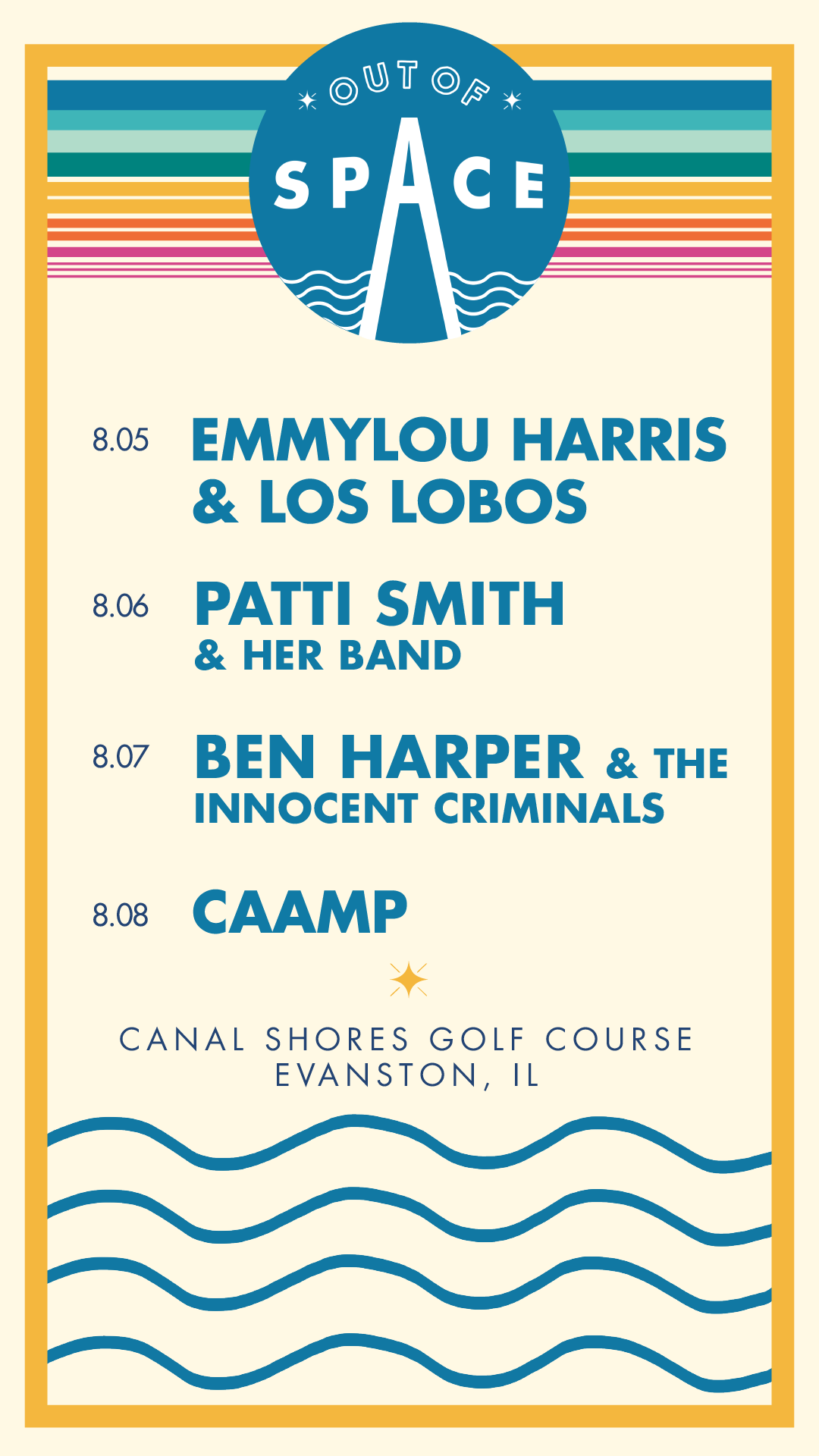 Canal Shores kicks off on August 5th with Emmylou Harris and Los Lobos, followed by Patti Smith and her band on the 6th, Ben Harper and the Innocent Criminals on the 7th and closing out on August 8th with CAAMP.

The Canal Shores series begins with Emmylou Harris and Los Lobos, both giants of roots music. Emmylou Harris began her career collaborating with Graham Parsons, over the years she has been nominated for 48 Grammys, winning an astonishing 14 times, recording with Daniel Lanois, Willie Nelson, Buddy Miller and many more, establishing a legacy of gorgeous albums that run the gamut from mainstream country to more experimental roots sounds. 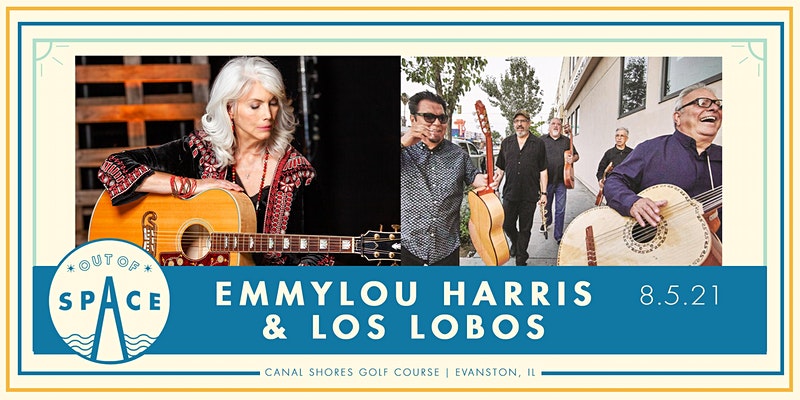 Los Lobos (pronounced [los ˈloβos], Spanish for “the Wolves”) is an American rock band from East Los Angeles, California. Their music is influenced by rock and roll, Tex-Mex, country, zydeco, folk, R&B, blues, brown-eyed soul, and traditional music such as cumbia, boleros and norteños. The band gained international stardom in 1987, when their version of Ritchie Valens’ “La Bamba” topped the charts in the U.S., the UK and several other countries.

August 6th, singer-songwriter, musician, author, and poet Patti Smith and her band will take the stage. Called the “punk poet laureate,” Smith fuses rock and poetry in her work. On November 17, 2010, Smith won the National Book Award for her memoir Just Kids. She placed 47th in Rolling Stone magazine’s list of 100 Greatest Artists published and was also a recipient of the 2011 Polar Music Prize.

Ben Harper and his Innocent Criminals perform on August 7th. Harper plays an eclectic mix of blues, folk, soul, reggae, and rock music and is known for his incredible guitar playing and social activism. He has released twelve regular studio albums, for which he has won 3 Grammy Awards.

Sunday, August 8th, CAAMP will play the final day at Golf Shores. Started by boyhood friends Evan Westfall and Taylor Meier, CAAMP came to life in Athens, Ohio. Taylor began penning and playing original songs at coffee shops around Athens in 2013. Evan moved down a couple of years later and together in a hazy attic, enjoying light beers, they would find the heartfelt sound that became CAAMP. Since independently releasing their self-titled first record in 2016, they have climbed Spotify charts, headlined the US, purchased denim jackets and added a bass- playing buddy, Matt Vinson- who also enjoys light beers and denim.

Out of Space moves to Temperance Beer Company in September.

Thursday, September 2nd is headlined by the legendary BIG BOI. If the genre of hip-hop ever gets a “Rap Mount Rushmore,” a legacy as the region’s foremost wordsmith, funkiest gentleman, and resident ATLien certainly guarantees a place for the rapper, songwriter, record producer, actor, and philanthropist born Antwan André Patton. He made history as the preeminent spitter of the Dungeon Family and one-half of OutKast. The legendary duo sold 25 million albums and garnered seven GRAMMY® Awards, becoming the first and only hip-hop artist in history to win the GRAMMY® for “Album of the Year” upon release of the 2003 RIAA Diamond-certified Speakerboxxx/The Love Below.

On Friday, September 3rd southern rock giants Drive-By Truckers headline, joined by JD McPherson. From their breakout album, Southern Rock Opera, to this year’s searing political manifesto, The Unraveling, the band, led by Patterson Hood, have articulated the ambivalence, rage and joy in the southern experience. Oklahoma rocker JD McPherson is one of the most exciting acts touring now, synthesizing rockabilly, blues and country. 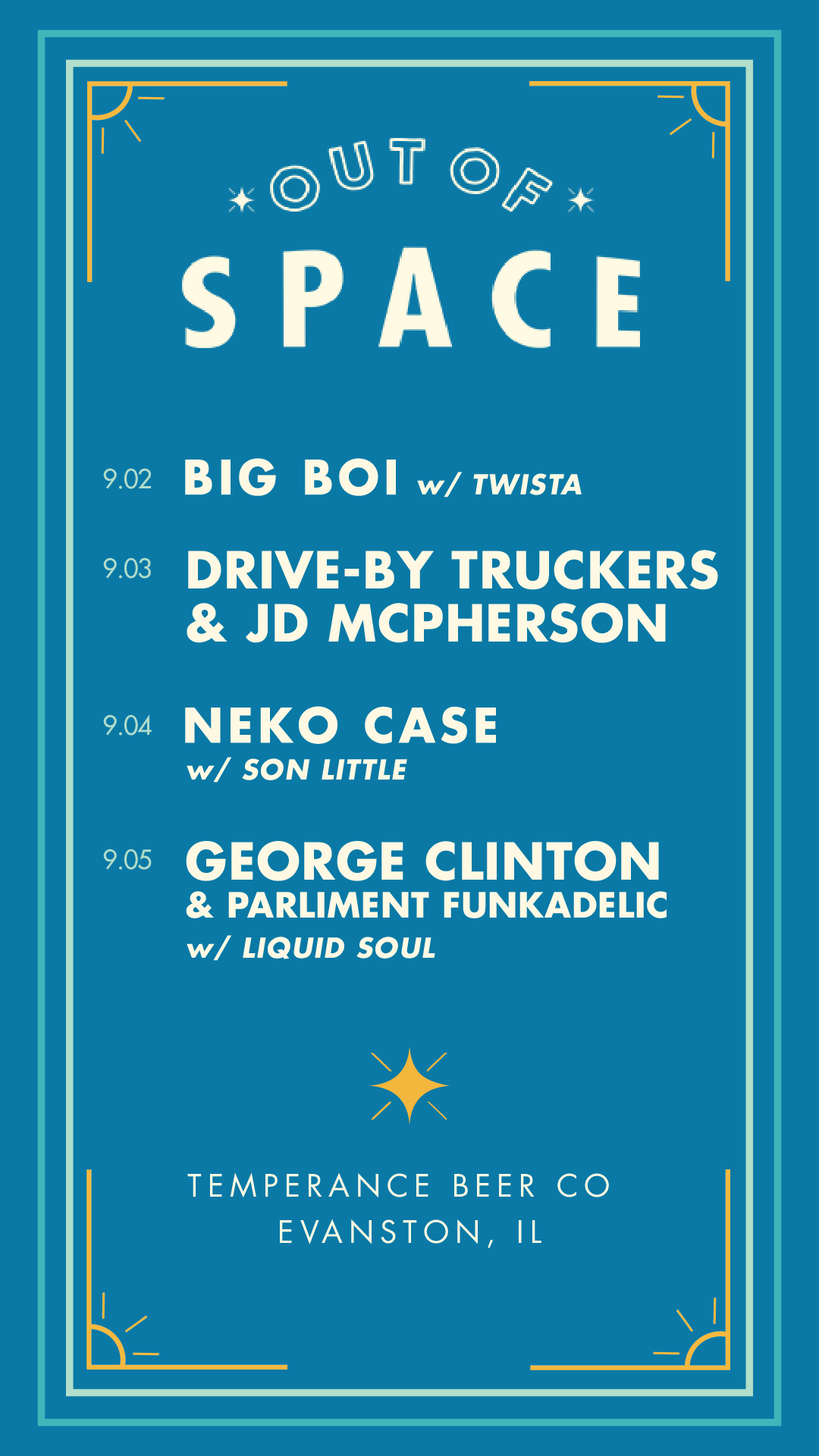 Sunday, September 5th, Out of Space closes out when funk legend George Clinton brings Parliament Funkadelic to the stage. The Parliament/Funkadelic machine ruled black music during the ’70s, capturing over 40 R&B hit singles (including three number ones) and recording three platinum albums. In reviewing Clinton’s illustrious career and success as a producer/writer/performer, perhaps his greatest achievement stemmed from his relentless dedication to funk as a musical form, deeply rooted in the music traditions of New Orleans and the blues of the deep south.

Aug 6 – Patti Smith and Her Band

In 2008, Evanston’s SPACE opened, offering a jewel box of a music venue with stellar production values and the opportunity to experience intimate performances from the finest musicians across a wide variety of genres: Dr. John, Lucinda Williams, Bob Mould, Sturgill Simpson, Gary Clark, Jr., Booker T. Jones and many more. Often recognized on the best venue lists of 93XRT, DownBeat and Chicago Tribune, SPACE is part of the 16 on Center development company, which oversees operations of more than 15 restaurants and venues, including Thalia Hall in Pilsen and The Empty Bottle in the Ukrainian Village.

But the organizers at SPACE recognized that operating a bantam locale prevented them from bringing larger acts to the community, and decided to start presenting a summer series that is both ambitious and reflective of the community at large. Thus, Out of Space was born, and now presents 8 diverse summer performances at 2 venues in the area, Temperance Beer Co. and Canal Shores. Out of Space works with charitable partners and other area vendors to produce a vibrant experience for music fans of all ages.