Violent Femmes Celebrate 30th Anniversary Of ‘Why Do Birds Sing?’ With Deluxe Reissue 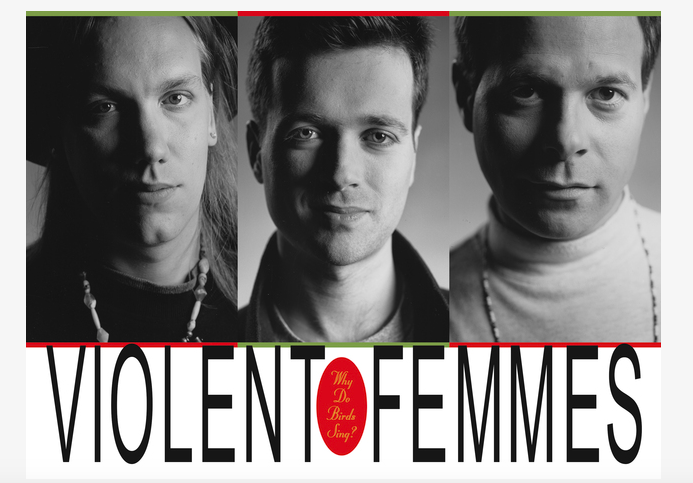 Craft Recordings is pleased to celebrate the 30th anniversary of the Violent Femmes’ Why Do Birds Sing? with a reissue of the bestselling album from the folk-punk pioneers. Due out October 8th and available for pre-order today, the deluxe 2-CD and digital formats will feature newly remastered audio, a trove of previously unreleased material(including alternative takes and outtakes), and a complete concert from 1991 (captured at The Boathouse in Norfolk, VA). Fans can visit digital platforms today to pre-save the album or stream or download the advance single, “Me and You,” a track recorded during the album’s original recording sessions, but unreleased until now.

Also available is a vinyl reissue of the original 13-track album, featuring freshly remastered favorites like “American Music” and the band’s inspired cover of Culture Club’s “Do You Really Want to Hurt Me.” A limited pressing on translucent red vinylwill be available exclusively via the band’s website and CraftRecordings.com, while select indie record stores will offer a smoke-colored edition. 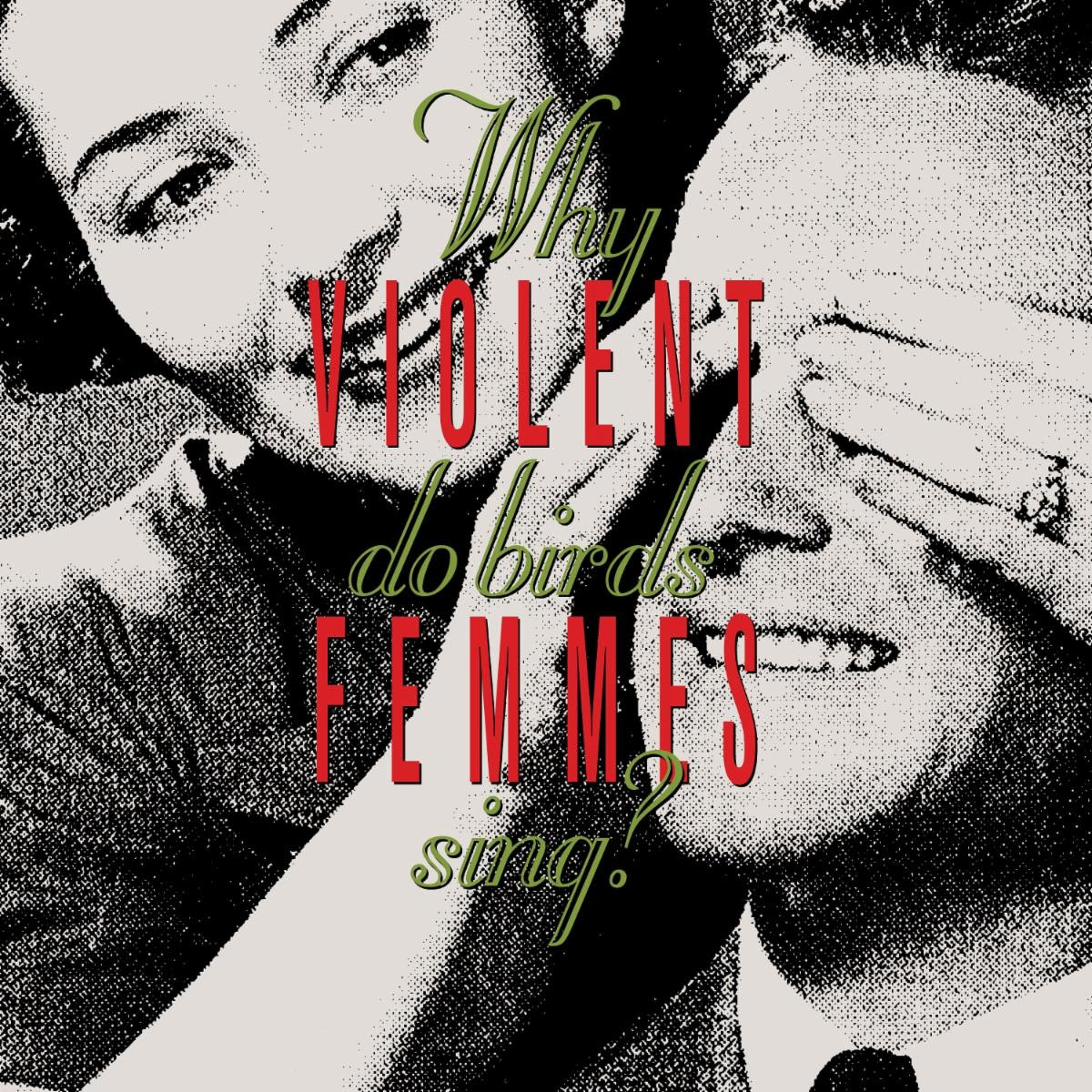 The bonus-filled CD and digital editions offer early versions of songs that wound up on later albums, including a stripped-down version of “Color Me Once,” which was later released on The Crow (Original Motion Picture Soundtrack), as well as original takes of “4 Seasons” and “Breaking Up” from the band’s 1994 album, New Times. Rounding out the unreleased material is an alternate mix of the song “American Music,” which is quite different from the album version. Also included is “Dance M.F. Dance!” which was originally released as a B-side internationally. Meanwhile, the live recording from The Boathouse concert in Norfolk, VA is being released in audio format for the first time(previously available only as part of the band’s 2005 DVD collection, Permanent Record: Live & Otherwise).

Born out of the Milwaukee underground, Violent Femmes—who are celebrating their 40th anniversary this year—formed in the early ‘80s by Gordon Gano (vocals, guitar), Brian Ritchie (bass), and Victor DeLorenzo (percussion). Blending jittery folk-rock and punk sensibilities with a heavy dose of teenage angst, the band gained a fervent fanbase, thanks to their 1983 self-titled debut. Several of the album’s enduring tracks, including “Blister in the Sun,” “Kiss Off,” “Gone Daddy Gone,” and “Please Do Not Go” became college radio hits and made the Violent Femmes one of the biggest alt-rock groups of the decade.

By the turn of the ‘90s, the Violent Femmes had released three more studio albums (1984’s Hallowed Ground, 1986’s The Blind Leading the Naked, and, after a brief hiatus, 1988’s 3). For their next effort, however, the newly reunited trio wanted to try something new and, as Ritchie tells journalist Jeff Slate in the liner notes, “regain some of the energy that we had in the beginning.”

The first step was finding the right producer. Michael Beinhorn—a former member of the pioneering group Material, who went on to helm albums by the Red Hot Chili Peppers, Soundgarden, and Soul Asylum—fit the bill. “Beinhorn was the most eccentric producer we met with,” Ritchie recalls. “More importantly, he understood our strengths as a trio, and the intimacy of the sound, and our improvisational nature, and wanted to focus on Gordon’s lyrics.”

As the band recorded Why Do Birds Sing?, they found themselves returning to their classic Violent Femmes-era sound, particularly with songs like “Out The Window” and “Look Like That.” They also revisited several compositions from their earliest days, including “Girl Trouble,” “Life is a Scream,” and “Flamingo Baby.” Additionally, upon Beinhorn’s urging, the band chose to record an unlikely cover: Culture Club’s 1982 hit, “Do You Really Want to Hurt Me.” “We took it as a challenge,” laughs Gano, who reworked the majority of the lyrics, making the song sound like a Violent Femmes original. Ritchie adds, “It was an experiment that turned out really well…in fact, we bumped into Boy George once in a hotel bar and he told us, ‘That is the best cover of any of our songs anyone’s ever done.’”

Why Do Birds Sing? also included one of the group’s most commercially successful singles, “American Music,” which hit No. 2 on Billboard’s Modern Rock chart and has since become an essential song at shows. Based on a vintage-inspired shuffle, the track stands out in the Violent Femmes’ catalog. “‘American Music’ communicates a lot,” notes Ritchie. “But the arrangement has a lot of very interesting touches, and we thought it was a good production of a great song that encapsulated a lot of music history in one track, so that’s why it led off the album.”

Released in the spring of 1991, Why Do Birds Sing? pushed the Violent Femmes into their highest level of mainstream success—nearly a decade into their career. Over the next few years, the band became a must-see act at festivals like Lollapalooza and Woodstock ’94, while their videos could be seen regularly on MTV. As the group was embraced by a new generation of fans, Violent Femmes entered the Billboard 200 for the first time since its release and was certified platinum by the RIAA.

Why Do Birds Sing? also marks the trio’s final album to feature their original line-up, before drummer Victor DeLorenzo departed the group. Despite the change in personnel, the Violent Femmes continued to record new material throughout the ‘90s, while their earliest songs remained in the zeitgeist, thanks to popular shows and films such as My So-Called Life andReality Bites. After taking an extended hiatus in the late aughts, all three original members briefly reunited for a handful of live appearances, including a highly anticipated set at the 2013 Coachella Valley Music and Arts Festival. In 2019, ahead of the band’s 40th anniversary, Gano, Ritchie, and newcomer John Sparrow released Violent Femmes’ tenth studio album, Hotel Last Resort.

This fall, the Violent Femmes are excited to return to the road with an extensive 30-date U.S. tour, co-headlining with Celtic punk band Flogging Molly, before heading to Australia and New Zealand in early 2022. The tour begins on September 3rd at the Saint Louis Music Park in Maryland Heights, MO. Full tour itinerary below and visit ViolentFemmes.com for tickets.

Click here to pre-order Why Do Birds Sing? (Deluxe Edition), or stream/download the advance single and pre-save the album.

October 17: Eugene, OR @ The Cuthbert Amphitheater