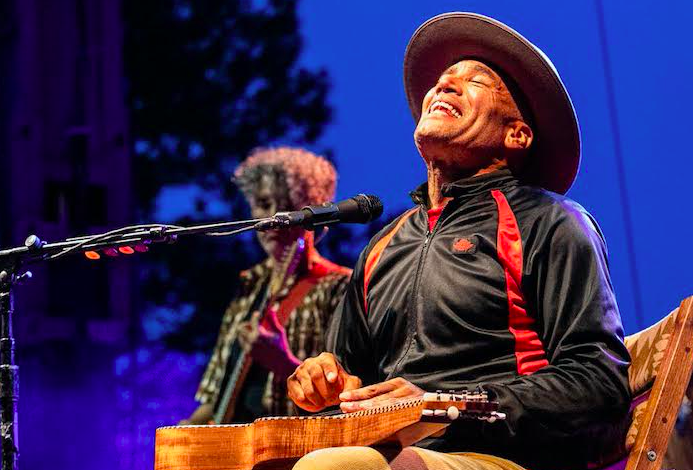 Ben Harper is a fascinating and unique musician. He began playing guitar at the age of 6, had his first gig at the age of 12, and has had a long and storied career, consisting of 15 studio albums and numerous live albums and other projects. Harper has released an album with his mother Ellen Harper, the under-rated Childhood Home, and he produced and wrote every song on Mavis Staples’ latest release, 2019’s We Get By. Harper’s latest release is the beautiful Winter is For Lovers, an all-instrumental album.

Ben Harper & The Innocent Criminals’ Saturday night Out of Space show at Canal Shores Golf Course was a tour de force, and it was clear that Harper and his band were happy to be playing live again after a long layoff forced by the pandemic.

The respect that the Criminals have with Harper is only matched by the respect that Harper demonstrated to his band. In the course of his 100 minute performance, Harper felt the need to introduce the members of his band to the crowd twice.

Ben Harper’s music cannot really be compared to any other artist; it’s an interesting mix of funk, rock, soul, and reggae, with some gospel and an occasional ballad thrown in for flavor.  The capacity crowd was a mix of young and older fans who danced to the music all night.

Early on in his show, Harper took a moment to mention and honor his bass player Juan Nelson, who played with Harper for 27 years and who passed away earlier this year.  Harper suggested that the evening be used to “enliven (Nelson’s) name in song,” and Harper and his band proceeded to do so. Harper played crowd favorite “Steal My Kisses” to much acclaim. And halfway through his main set Harper played two pretty ballads by himself: “Happy Ever After in Your Eyes” and “Walk Away.”

Harper’s pro-marijuana/pro-tolerance ballad “Burn One Down” became a sing-along for the appreciative crowd, and Harper closed his main set with a long and loud band version of “With My Own Two Hands,” aided by his percussionist extraordinaire Leon Mobley.

Harper’s encore consisted of the one-two punch of “Forever” and “Waiting on an Angel.” The crowd was sent on their way by Harper’s plaintive words: “I don’t wanna go alone.”