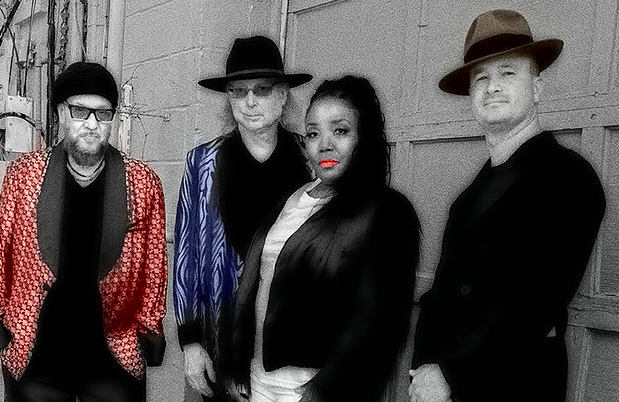 When Robbin Kapsalis struts on the stage with her white beaded dress and go-go boots, she smiles, shimmies, and sings to the crowd with conviction. The musical wrecking crew, Vintage#18, supports her with groovy guitar licks and a rhythm section solid as a rock. Her sultry voice sneaks up behind you and slaps you silly with their second album, Soul Shaker out on October 15, 2021, on her label Bird Song Records via CPI Distribution.

The band spent this past winter and spring working on the album and quickly had it turned around to have something for their fans this Fall. Soul Shaker will be the remedy for those aching fans, for it is filled with blues, soul, and jazz sounds. The band wrote six original songs, also includes an original from Deb Ryder, and chose three covers, including two classics; “Shake It Baby” by Junior Wells and Buddy Guy and “The Cannonball” by Lil Ed and The Blues Imperials. Robbin picked the Chicago bluesman and their tunes to show off her roots and are live show favorites.

Robbin & Vintage#18 produced Soul Shaker at Gizmo Recording Studios in Silver Spring, MD, with Gantt Kushner engineering, which was exciting to have the whole band work in the process. They were elated to get back in there after months of COVID-19 pandemic restrictions and lockdowns.

“The energy in the studio was high… the vibe was strong, as it should be, we’ve been playing together for eight years, and it was time to share our music once again. When the last note was played, we couldn’t stop smiling; my heart hurt. I felt so proud of us. I think we accomplished our goal for this album…bring that live energy we’re known for to each song…make ’em feel it,” Robbin enthuses.

The core group members are Bill Holter on guitars, Alex Kuldell on drums, and Mark Chandler on bass, and with Robbin’s vocals, the four of them melt into each other, which sets them apart from their peers. A few guests were brought in for the horn parts that were arranged by their friend Ron Holloway, a legendary saxophone player (Warren Haynes, Gov’t Mule, Tedeschi Trucks, The Allman Brothers Band). These added some flavors and textures that help flesh out the songs. Their studio time served as a great getaway so they could close the door to the outside world and create their music.

Soul Shaker will be a hard album to pick just one song to become your favorite, for they are all great, and D.J.s will leave it on shuffle. Vintage#18 lays a low, steady groove allowing Robbin’s vocals to breathe.

Premiering today is the video for “Lost Souls,” which urges you not to lose your soul. “Wear your heart like you mean it, and not just for show.” This song is an invigorating reminder that it absolutely don’t mean a thing if it ain’t got that swing — Robbin’s soulful vocals the icing on the cake.