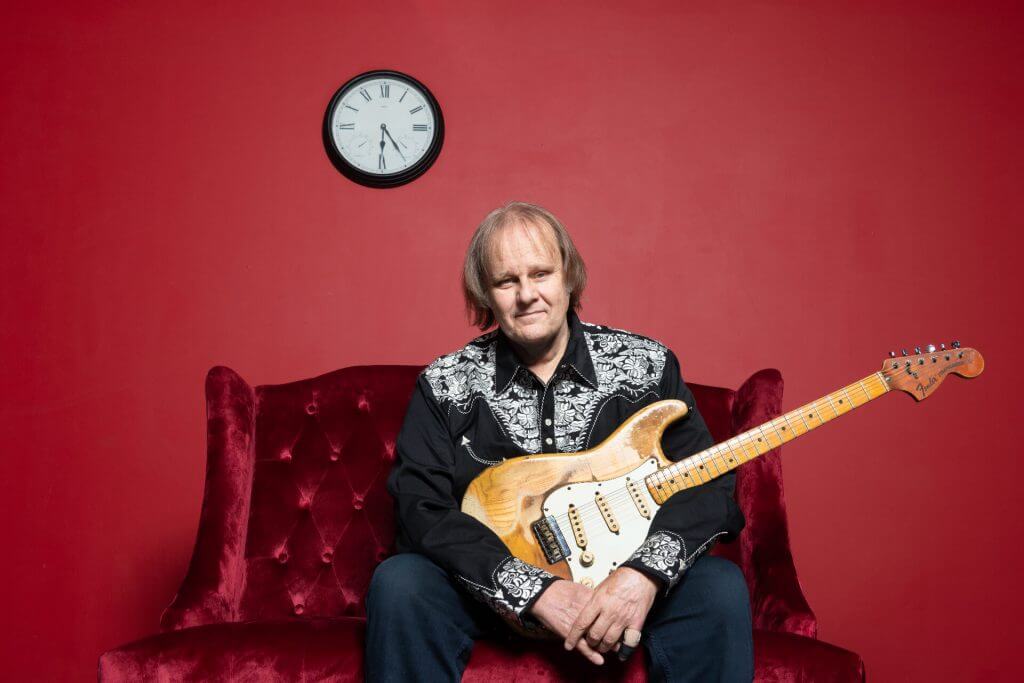 Blues rocker Walter Trout begins his American tour on Wednesday October 6th. His life story read like a horror movie until his princess arrived, and then it became a fairy tale in a career that finds him at the top of his game at age 70. His most recent release, Ordinary Madness, is a mature blues/rock tour de force that breaks new ground with some of the best playing since Stevie Ray Vaughan’s last recordings. “All Out of Tears” from Ordinary Madness recently took The Blues Foundation’s Blues Music Award for Song of the Year. But he’s been to hell and back getting there. 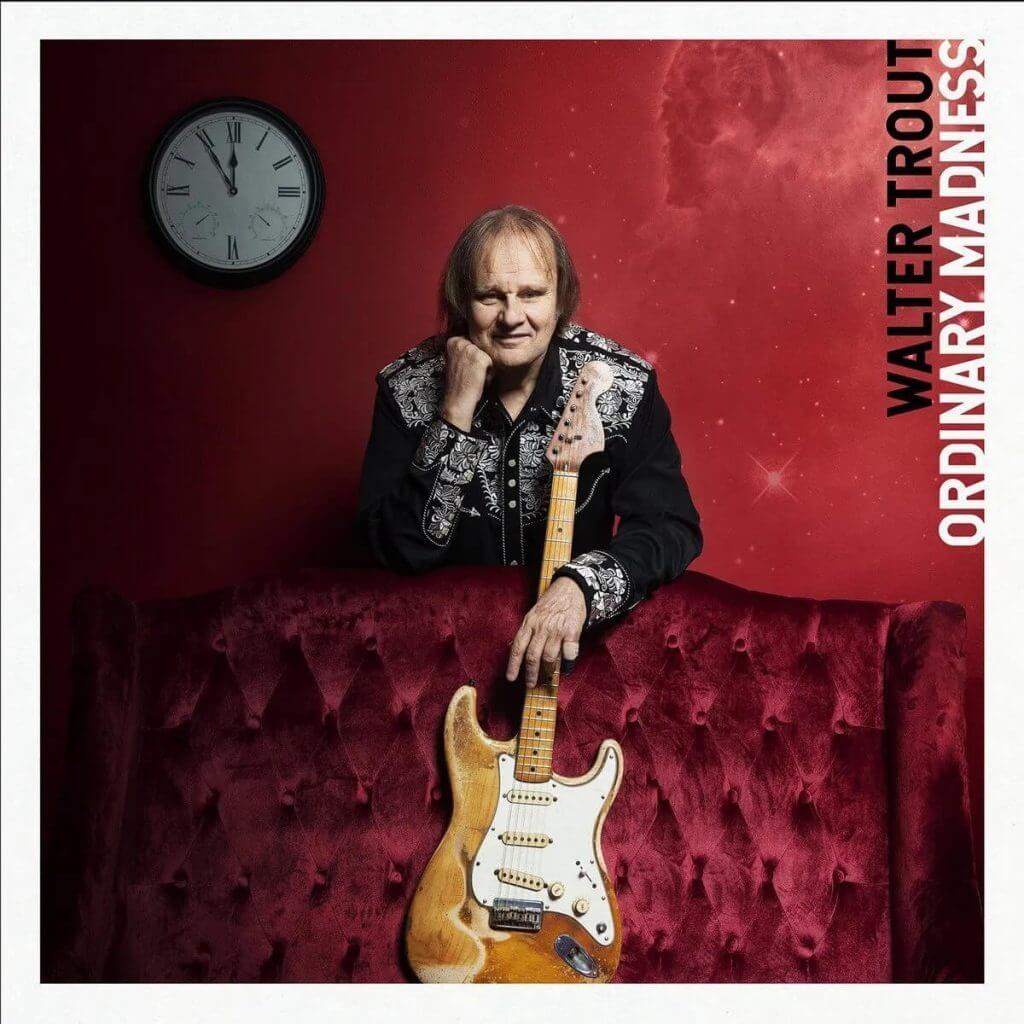 “My childhood was full of dysfunction, and there was violence,” says Trout. “This next album that I’ve finished and won’t be out until next year is called Ride, and every song on it has a story behind it. The story behind the title track is about a house I loved in New Jersey where we lived right next to the railroad tracks. The train went between Atlantic City and Philly, and the track was right there, and it went through every night and would shake the whole place.

“My parents bought the house when I was a little kid. They said, ‘This will be hard to deal with,’ but I loved it. I would hear that train, and I would dream of that train and escaping, and that’s what that song says. I dreamed that train would take me away from the trouble. I knew all the places I would travel, the things I would see, and the things I could do. I would hear the whistle blow. I would hear the wheels singing on the track. I’m gonna climb aboard and ride and I ain’t ever coming back. That’s one of the verses.”

Trout calls Jesse Ed Davis his mentor. Best known as the guitarist in Taj Mahal’s first breakout band, Davis also played with Clapton, John Lennon and George Harrison. “Jesse played with me for two years, and I cherish those two years, and I cherish what I learned from him musically. To this day in just about every note I play there is a little bit of Jesse Ed Davis because I was the rhythm player. I played rhythm every night and watched him play. He was three feet away from me on the stage, right? So that was ’75, early ’75, and I left him in late ’77.”

Davis, a native American, died of a heroin overdose in 1988. Trout had been using with him.

By the time of his 38th birthday on March 6th, 1989, Trout had been John Mayall’s lead guitarist for five years, following in the footsteps of Peter Green and Eric Clapton. That night he went to John Mayall’s hotel room to tell him he was leaving that band. “We were in Drachenberg, Sweden in the Symphony Orchestra Hall, and I was thinking to myself, ‘I’m 38 years old. I probably can stay in this band as long as I want to because John and I are best friends. He loves me, and he loves what I do, but I want to have a solo career, and I want to write songs and perform. How long do I wait before I stop? By 38, a lot of guys have already had their big peak, and they’re trying to recapture their glory years, right?

“So, I went to his hotel room after the gig, and I said, ‘I’m 38 years old, and I love you very much, but I’m going to have to leave the band.’ I knew it was a gamble, and you know what he said to me? He said, ‘I understand what you’re doing. I support you and best of luck to you, Walter, but you need to know, if you go out, and you try to have a solo career and you fail, don’t call me and ask for the gig back because by then I will have someone else in my band. So, once you leave the band, you’re gone. Just keep that in mind.’” 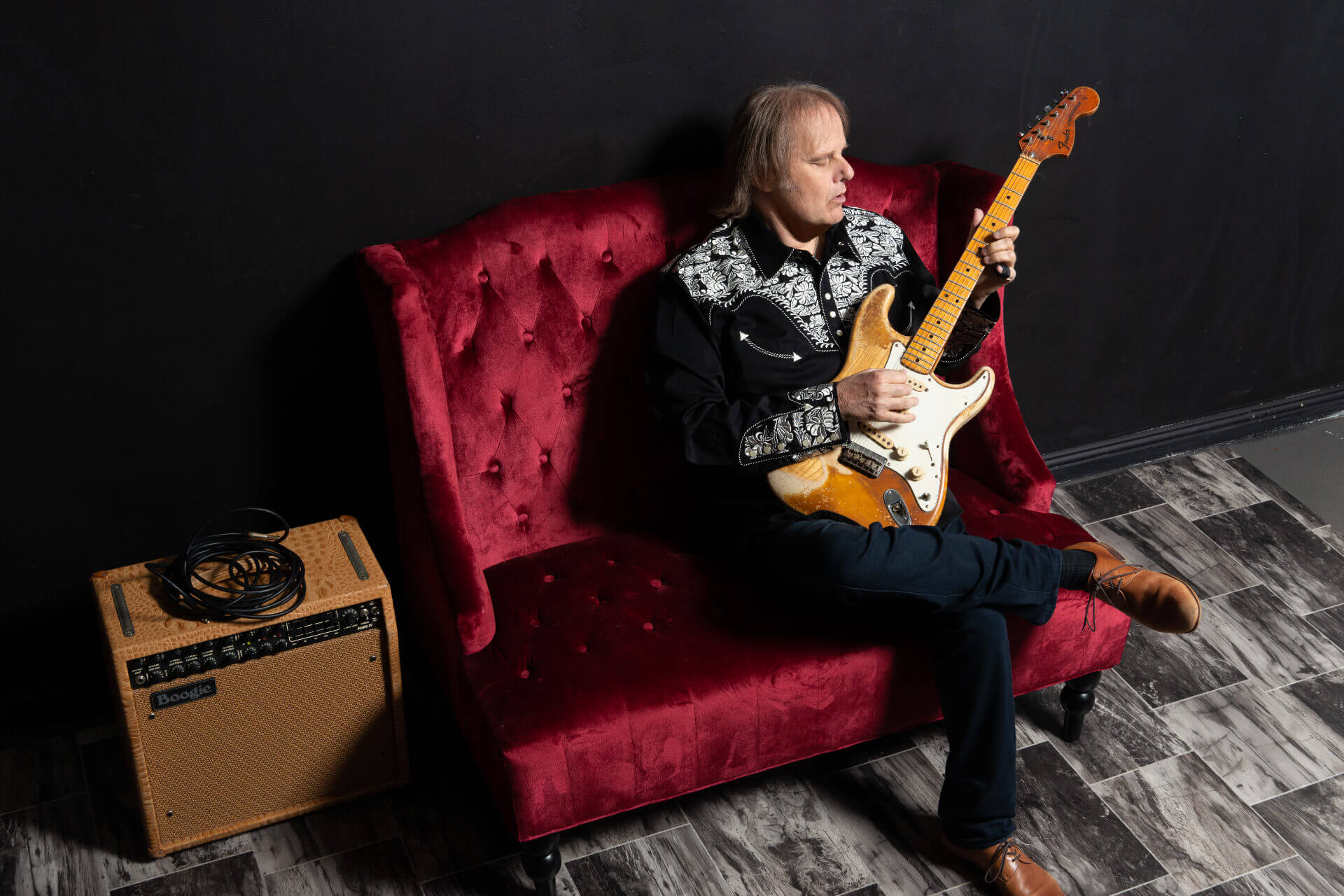 A post-gig encounter with Carlos Santana got Trout to quit drugs and alcohol, but his habits brought on cirrhosis of the liver in 2013. His life was saved by a last-minute liver transplant in 2014. He remembers the moment his wife Marie came into his room after the operation. “It was eight in the morning. The door to the hospital room opened and she came walking in. The sun shone through her blonde hair, and she kind of floated in the room. She looked like an angel from God.”

His album Battle Scars is about his brush with death. “Yeah, I had brain damage. I had to relearn how to talk. I had to relearn how to play the guitar. It took me a year. I practiced every day, seven or eight hours. I started from scratch. When it came back, I wrote Battle Scars and with that I felt that was probably the most honest and deep I have ever been able to go, and I was able to take a look at myself and my experiences and say things maybe I would not have said before my brush with the all mighty, and it changed me a lot.

“Stevie Wonder was making radio hits and sort of nice little dance songs, and then he was in an automobile accident where he was very, very, very close to death for a long time, and he came out of it an entirely different person and an entirely different musician because once you have gone through that facing death every day, and you go through the self-examination of looking at mistakes you’ve made and looking at people you’ve done wrong and also things you’ve done right when you came out of it a very different person, and when I finally got out of that hospital I had to relearn how to play the guitar again because it was wiped clean from my memory.”

It was Marie who nursed him back to health after the transplant. He remembers the first time he met her in Denmark at one of his concerts in 1990. “I talked to her for half an hour, and I told her, ‘You’re gonna move to America. We’re gonna get married. We’re going to have children, and we’re going to get old together’ And she said, ‘You’re crazy,’ and then I said, ‘You have no say in this because this is meant to be.’ Here we are 31 years later with three grown kids, you know?”

Walter Trout goes into this American tour with 16 solo albums under his own name. His first two albums in 1990 and 1992 sold more than 100,000 copies. He took home the Song of the Year BMA in 2016 for “Gonna Live Again” and Rock Blues Album of the Year in 2016 for Battle Scars. In 2018 he won Rock Blues Album of the Year for We’re All In This Together.His 2019 CD Survivor Blues debuted with two consecutive weeks on the Billboard Blues Chart at number one and stayed in the top 10 for 12 weeks. “All Out of Tears” from Ordinary Madness recently took The Blues Foundation’s Blues Music Award for Song of the Year.

“I think if you listen to the lyrics on Ordinary Madness, they’re about as true and deep a view of who I am as I’ve ever done. You know ‘My Foolish Pride’? That was just something I wrote down on a piece of paper. It was not meant to be a song. I was writing between cities, and I was thinking about my life, and I said, ‘You know, sometimes I do my best, but I fail.’ I know that happens to everybody, and I just wrote some words down on a piece of paper. I found them, and then I put them to music, and that became that song.

“The thing with Ordinary Madness is I would get a lot of messages from people, Don, after I came back, and they would say, ‘You’re my inspiration, and we’ve looked to you for that.’ And I want to say, ‘Man, thank you, but you know I’m as fucked up as the next guy, and I have as many demons and torments inside of me as the next person and maybe more than some people. So, if you look at me for some kind of explanation, I thank you, but don’t put me up on some kind of pedestal because this music comes out of severe doubt sometimes. This music comes from a lot of mental stuff.’

“The songs came quickly. I have found I have to get into a zone. Ok, I’m gonna write an album now. I’m gonna give myself a couple of weeks. I don’t want to talk to anybody. I want to be alone, and I’m gonna got into self-examination of basically looking into the mirror and going, ‘Do you like what you see? And that’s what I’m trying to deal with in my music.’

“When I latch onto what it is I want to say, it comes very quickly, but then going in and recording it, that’s where we do a lot of work. We may do three or four different approaches to a song, and then like one. So, I was actually very, very happy with the album.”

Ordinary Madness is a rarity in that it is a mature example of blues/rock from a white artist who has gone through the kind of angst usually only experienced by black artists who, because of their color alone, face more difficult obstacles than white artists who play the blues.

Willie Dixon called blues truth. Rock on the other hand exploits the explosive energy of youth. Putting the two together can be a slippery slope. Walter Trout has a lifetime of hard knocks. He bares his soul in truth without losing the excitement of youth.

“When my son John was in the second grade, the teacher asked him to define success, and he said, ‘Spending my life doing what I’m passionate about.’ That was in second grade he said that. So, that was what both my wife and I have tried to instill in our kids. Do what you love doing. Don’t do something just to make money and spend your life doing that. You want to love being alive and all three of our kids, that’s what they’re doing. They are pursuing their passion.”

In 2017, Walter and his wife Marie were in a seminar I held on Beale St. called Blues As A Healer during the International Blues Challenge. At that seminar he openly wept. He’d been to hell and back, and now in his music he was taking us all along for the ride to the top of the roller coaster. He told me then, “(My stepfather) would try to murder my brother and I with a hatchet, and chop down the door of our bedrooms chasing us down the street. My brother would hold him off with a shotgun. It was not Leave It to Beaver back then.”

Strap in your seat belt and go see this guy. He’s an inspiration.