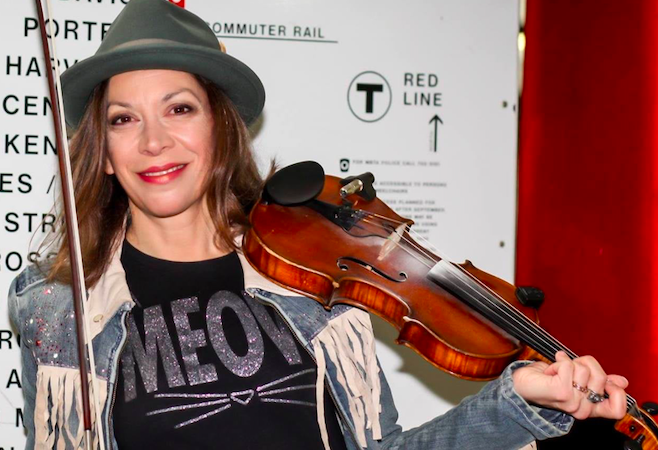 From the moment I played my first note busking in Boston’s subway in 2008, I knew I was meant to be there. I love giving people a mini live concert – as a surprise – amidst the frenzy of public transportation.

I have enjoyed the honor of entertaining thousands of people waiting for trains. The wealth of experiences and magic moments transcend what I can write in an article, but I will share the flavors of the subway busking world because I am asked about it most often. (Right after “what’s the difference between a fiddle and a violin?” Answer: same instrument.)

I have met many musicians who briefly explored the subway arena, but didn’t care for it. It requires being okay with performing in situations where you appear to be ignored. The passersby owe you nothing. On top of that, subways are – literally – dirty and you’re likely to see cockroaches and rodents frequently. And, you have to be ready for all kinds of people. On any given day, I encounter kind, crazy, generous, homeless, excited, inebriated, mentally ill, desperate, angry, curious, hungry, sad, jovial people who may share with me or try to steal from me.

But it is – to me – an energetically beautiful environment, carrying the melting pot of city residents and visitors from around the world. It’s a common denominator of humanity. Even my ‘stage’ is physically at the same level as the listeners and I love that, too.

Each time I descend the stairs to my favorite station, I have three thoughts: 1) I hope another musician isn’t in my favorite spot (Red Line Park Street). If so, I hop the train to another station. 2) I say a little prayer to ask that my music reach whomever it is supposed to hear it on that day, and 3) I remind myself to be prepared for anything, as I’m alone with a gamut of strangers, and say a prayer for protection.

My senses are always on high alert, even as I sing and play. I never know when I’ll need to delicately navigate and diffuse situations such as dissuading someone from jumping into the train pit or physically protecting myself, my fiddle, my hard-earned tips from someone who is off kilter or just a thief. I’ve encountered all these situations. The bottom line, however, is that most people are decent, good, kind, and express great appreciation that I appeared on their path.

My spirits are lifted as I see tense faces soften and smile, strangers spontaneously dancing together, and children mesmerized by the music. I’m grateful to each person who offers me their hard-earned money – whatever amount – that they hadn’t planned on giving to a subway musician when they woke up in the morning. If they don’t have money, they frequently give what they have. Tips range from crystals, watches, flowers, hundred-dollar bills, gift cards, candy, kind notes (that I save!), marijuana and everything in between. In the more than 400 times I’ve spent three-hour stints in the subway, my monetary ‘take’ has ranged from $7 to more than $100, but I always leave feeling like a million dollars. I’m always covered in a thin layer of grit, but I know I’ve done something positive in our strange world. I take my wrinkled, worn dollars and coins – which I consider ‘magic money’ – and I share it as much as I can, paying it forward.

Beyond the actual dollars, my ‘paycheck’ comes in gifts of positive energy, and in the stories of joy, nostalgia, and hope that people share. People listen to me play and sing, and then I listen to their stories.

The spectrum of moments are book-ended by these two memories: A just-married couple stepping into the subway in wedding garb from city hall waited for the train – all smiles. I broke into a waltz and they had their first dance as a married couple, around the subway platform.

The most haunting memory I have is a homeless man who told me he was drawn down the stairs from the sound of my playing and he wanted to tell me how it brightened his day. He came directly from a homeless shelter after leaving his lover who beat him. He said the shelter was a worse experience than being ‘home’ and he was thinking of going back. We talked for a while. He was penniless, but refused my offers of money or help. Instead, he insisted on giving something to me as he felt I helped him so much. He gave me his necklace, which now lives wrapped around my fiddle case handle. I hope he is okay.

Right now, the subway in Boston (temporarily) forbids music performances, due to the pandemic. As soon as it is allowed again, I’ll be back there every week, in between my ‘above ground’ performances that often take me on the road. I truly love all I get to do, but underneath everything, I’m a Boston subway busker. That, is my home stage. I hope to see you there soon.

Ilana Katz Katz is an award-winning Blues and Appalachian fiddler, singer-songwriter, novelist, screenwriter, and visual artist. Her latest record, In My Mind (read review), debuted near the top of several national blues album charts. More information can be found at ilanakatz.com. Listen to ‘In My Mind’ here.