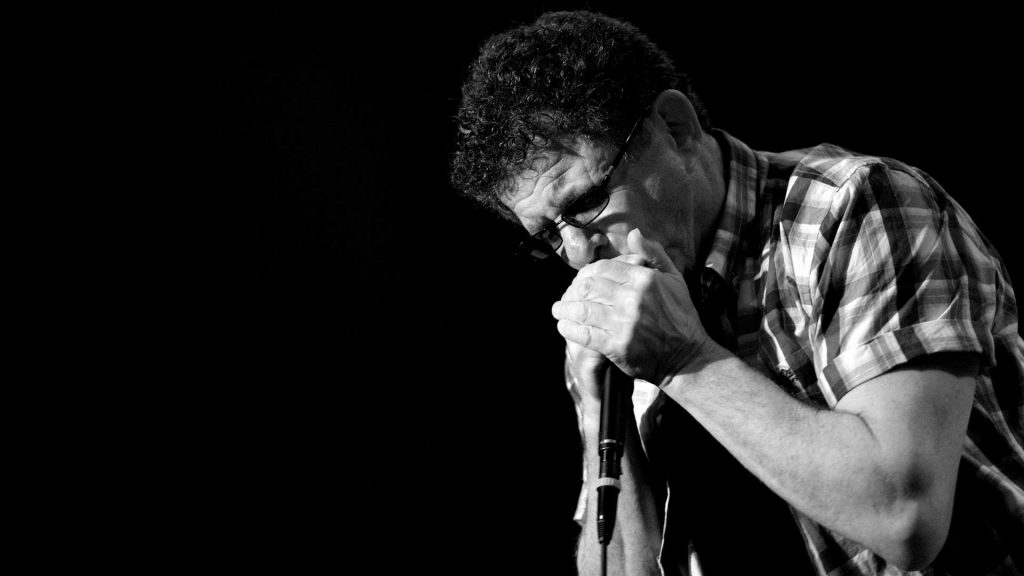 Composed, produced, and illustrated by Lee Oskar, recorded, mixed and co-produced by Brandon Busch, Never Forget powerfully addresses the atrocities of the Holocaust, while also serving as a stirring reminder that great music is a universal force for everything positive and vibrant throughout society. Never Forget’s nine largely instrumental tunes are sequenced like a soundtrack. The son of a holocaust survivor, Never Forget is Oskar’s musical memoir – Passages Through Music – telling his journey, his and his family’s story but also humanity’s story. 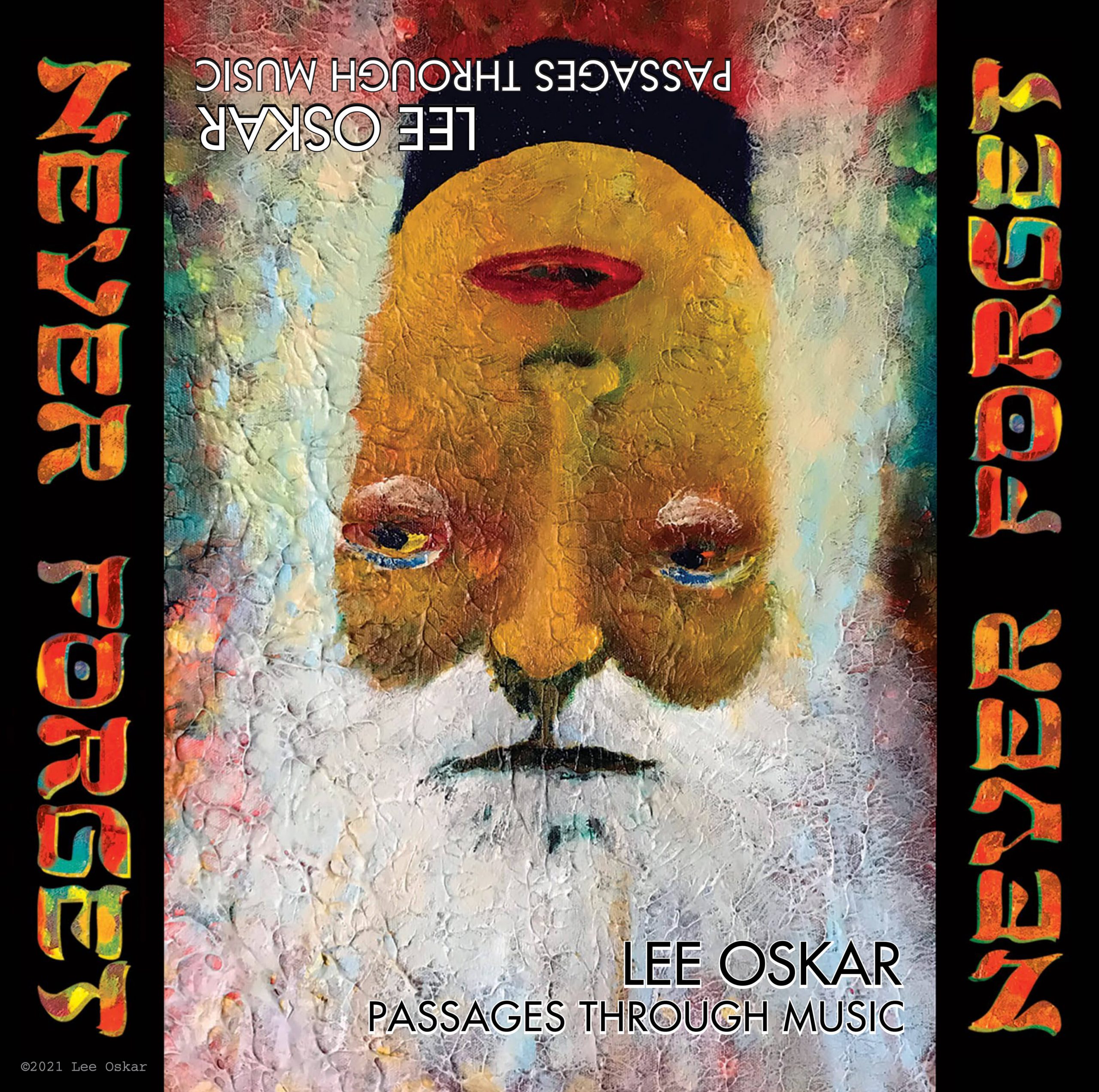 The messages here and the theme were the critical elements. I thought in every composition that the melodies and the meanings, as well as the playing, was designed to reinforce that underlying point that we’re taking you on a trip and it’s a trip designed to make you never forget the horrors of the Holocaust. In many ways I see this as my ultimate statement.

The album’s large cast of supporting musicians includes not only guitarists, bassists and drummers, but string musicians, reed players, background vocalists, even on occasion the services of an oud player and a flamenco guitarist. Such compositions as “Last Moments (Saying Goodbye)” or “Liberty (An American Waltz)” resonate powerfully thanks to sweeping orchestrations, soaring strings and evocative horn parts. Lee Oskar’s harmonica lines perfectly drive and anchor every selection. Oskar’s instrumental conception emphasizes delivering his trademark harmonica fills, accompaniment and solos in the same manner as a great vocalist makes lyrics resonate.

The beautiful opening number “Far Away Dreams,” features soaring melodies and arrangement. Two numbers that directly connect back to the disc’s theme, both “Song From Mom” and the title track “Never Forget” feature an intensity and poignant edge that decisively affirm the memories of, on one hand, a family tragedy that should always be remembered, but on the other hand a desire for humanity to never again let that type of horror or ugliness occur. By contrast, the songs “Liberty” and “World For Peace” have a triumphant, celebratory quality that offer a sound of hope and positivity for the future.

Oskar’s mother & her sister, both young teenagers at the time, escaped from the death march coming out of the Stuthoff extermination camp in Poland, and walked across bitterly cold terrain to escape — eventually landing in Denmark. “For all my life the things my mother told me about that experience have remained with me,” Oskar said. “It’s something I wanted to make certain is never forgotten and in many ways that’s always been on my mind and always been a driving force in my work, those memories…”

Oskar was born in Copenhagen, Denmark in 1948. He’s been playing harmonica since childhood, when a family friend gave the then six-year-old his first instrument. His fond memories of listening to Danish radio growing up include a special fondness for the music and singing of Ray Charles. “He’s someone whose delivery and sound have greatly influenced me,”Oskar said. “I’ve always wanted my sound to have that quality of soulfulness very much like his singing.”

Another aspect of his artistic personality was also developed very early — his love for and prowess as a visual artist. Never Forget‘s striking cover painting represents some of Oskar’s visual work. “For many years I did all the art direction for the War albums,” he continues. “Painting for me is another vital part of my life. If the art isn’t right on a project, that sets the wrong tone. It’s definitely a different vibe for me, but the connection is certainly there. They are both huge parts of my life, and it was just as important that the art direction for Never Forget clicked with the music.”

At 18, Oskar made the move to New York, despite having no money, relatives or connections there. After a period as a street musician, there were other stops in Toronto, San Francisco and ultimately Los Angeles.

Oskar met Eric Burdon at a jam on the Sunset Strip in LA and they started hanging out & going to jams together. Burdon decided he wanted to form a group with Oskar and began looking for a band to back them up. They heard about a group playing at The Ragdoll called Nightshift, who were backing Deacon Jones, and went to check them out. Oskar sat in with the band, and the rest is history.

The original group was Eric Burdon and War, though Burdon eventually departed the band. Their 1969 debut LP included the hit “Spill The Wine,” while the follow-up two-disc set The Black Man’s Burdon wasn’t as successful, but the band’s reputation for freewheeling idiomatic eclecticism became well known (they’re famous for a 60-minute version of “Mother Earth” at Ronnie Scott’s Jazz Club in London with Jimi Hendrix that would be his final public performance).

The distinctive twin sax/harmonica sound pairing Oskar’s harmonica with saxophonist Charles Miller “was always something that I wanted to have happen. It was something I had envisioned for many years.“ Oskar also recalls sitting around a swimming pool with the other members during a discussion about what to call the group. “I remember talking about the battle between what drives you creatively and other aspects of your personality, the war that happens within the human spirit,”  Oskar continued. “That’s where we got the name War.“

War emerged as a supergroup in the early ’70s, and had a lengthy string of hit singles and albums through the remainder of that decade as well as the ’80s and into the early ’90s. The Oskar harmonica lines were memorable parts of such War staples as “Lowrider,” ”The World Is A Ghetto,” “Why Can’t We Be Friends” and “Me and Baby Brother,” among others.

Oskar also began pursuing a solo career while maintaining his ties with War. A trio of solo LPs between 1976 and 1981 earned him a 1976 Triple Crown, being voted top Instrumental Artist of the Year in Billboard, Cashbox and Record World.

His love for harmonicas led him into another phase of the music business in 1983. Oskar formed a company to manufacture high-end harmonicas, and Lee Oskar Harmonicas continues as a major harmonica manufacturer both nationally and internationally.The company sells harmonicas for every known music idiom. Oskar manufactures them in conjunction with the Japanese factory, Tombo Musical Instrument Company. The harmonicas are produced with replacement parts that allow the user to change reed plates when/if the instruments become worn down by constant use, and also allows the mixing of different tunings. Lee Oskar Harmonicas celebrates its 40th anniversary in 2023.

Now a resident of Washington State, Lee Oskar has earned ASCAP writing awards, and even had his signature sound celebrated in Pitbull and Kesha’s recent hit  “Timber,” which was inspired by Oskar’s harmonica contributions in the song “San Francisco Bay.”

Lee Oskar’s Never Forget will ultimately take its place alongside other great LPs such as Marvin Gaye’s What’s Going On or Curtis Mayfield’s solo debut Curtis. These stand as works whose messages and impact have a decisive and hugely positive impact that extends far beyond just enjoying the music. Indeed, Oskar hopes that everyone who hears the compositions on Never Forget will embrace its ultimate purpose: bringing people together. Those qualities have always been evident in his work. They were first a vital part of the original group Eric Burdon and War. Then they became a key ingredient in War’s core sound during their peak years. Oskar’s maintained a warm and ongoing relationship with original War members Harold Brown, Howard Scott and the late B.B. Dickerson, and they formed the Lowrider Band after War.

The best expression of humanity’s creative spirit has always been represented in the arts. They stand as a chronicle of the greatest achievements from every world community. They have also provided the essential inspiration to carry people through the toughest times and harshest experiences. Whether it’s music, painting, literature, or dance, the arts stand as a bastion and motivating force that elicits the best qualities in societies around the globe.

All people, no matter their backgrounds, have much more in common than the things that make them different. I want to make music that inspires and unites people, that says we can achieve things together and that it’s really time to think more about what we can accomplish working with each other rather than focusing so much on what separates and makes us different.

The wonderful performances and evocative playing of Lee Oskar have always done that, and he accomplishes it with verve and flamboyance throughout every number on Never Forget.