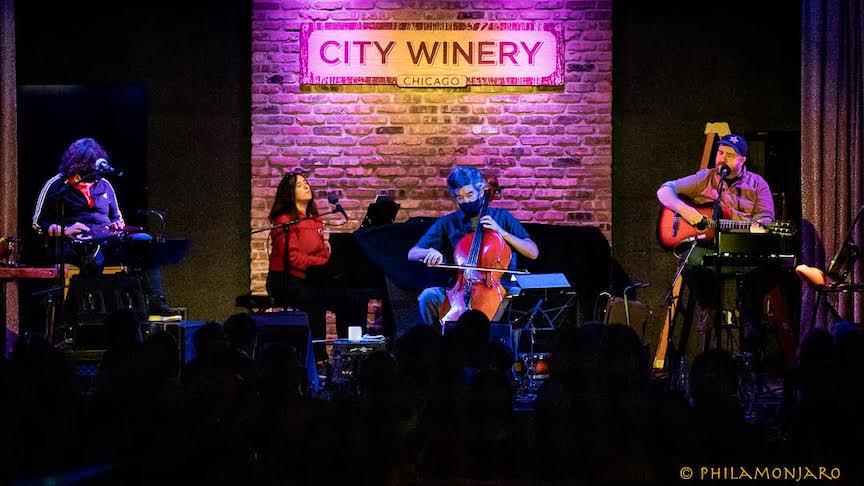 The Magnetic Fields opened a four-night stand at the City Winery in Chicago on Tuesday with a mix of twenty-eight songs, drawn mostly from their quirky album Quickies, released last year, from 2017’s underrated 50 Song Memoir, and from the over twenty-year old cult classic album (for those in the know) 69 Love Songs. The band also mixed in a fair amount of other Magnetic Fields’ tunes, and a song from one of band leader and oftentimes lead vocalist Stephen Merritt’s other bands, the 6ths.  These Chicago City Winery concerts were rescheduled because of COVID-19.

The four band members remained seated throughout the City Winery show, except when piano player and band manager Claudia Gonson stood up on occasion. Cello player Sam Davol remained masked and silent throughout the show.  Lead vocals were handled mostly by Merritt, although occasionally Gonson or fourth band member Shirley Simms would sing lead vocals. The droll and humorous banter between Merritt and Gonson evidenced two musicians who have enjoyed playing together for a long period of time.

The Quickies album consists of twenty-eight songs ranging in length from less than fifteen seconds to a maximum of about two and a half minutes, with about seven of the songs being about a minute or less. The six songs played by the Magnetic Fields from that release include the shortest song on the album “Death Pact (Let’s Make A)” and the song from the new album which received the most applause from the crowd,  “The Day the Politicians Died,” which the band stated that they had fun performing at their Washington, D.C. shows earlier this month. Quickies is far from a mainstream or traditional album, by any means.

The songs which received the most reaction from the crowd were the nine played from 69 Love Songs, the Magnetic Fields’ best-known release.  Although not every great song from that release was played, because there are so many, highlights included the country-ish songs “A Chicken With Its Head Cut Off” and “Papa Was a Rodeo.” Other featured “69 Love Songs” included “The Book of Love,” “I’m Sorry I Love You,” and “I Don’t Wanna Get Over You.” Merritt joked before he played the beautiful ballad “It’s Only Time” from the 2004 i album, that it was “our second most popular wedding song,” presumably after “The Book of Love.” The encore was Merritt’s solo take on “This Little Ukulele,” followed by the band’s return to the stage to finish with the 69 Love Songs tune “I Think I Need a New Heart.” The Magnetic Fields do not tour frequently, so it was a treat to see them play live and perform some of their most well-known songs to an appreciative audience.

Opening act Christian Lee Hutson, a Los Angeles singer-songwriter, played seven songs in a little more than half an hour, including five from his most recent release, 2020’s “Beginners,” and two other songs from an album created during the pandemic and yet to be released. One of the new songs was “Age Difference,” which contains the memorable phrase “I think I was suicidal before you were even born.”  Hutson’s wistful and pensive lyrics resonated with the crowd. He thanked the Magnetic Fields for having him as their opening act, and even reminisced about how he listened to the band in high school rather than participate in gym class.