Andrew Bird and Iron & Wine come together to announce the co-headline Outside Problems tour for summer 2022. From June through August, stretching from coast to coast, the extensive run of US dates will bring the two artists to more than 25 shows at such storied venues as Los Angeles’ Greek Theatre, Nashville’s Ryman Auditorium, New York City’s Pier 17 and Colorado’s Red Rocks, where they will be joined by Neko Case. With dozens of amphitheaters and bandshells in between, performances also include multiple stops in Iron & Wine’s home state of North Carolina, as well as Andrew Bird’s native Chicago. 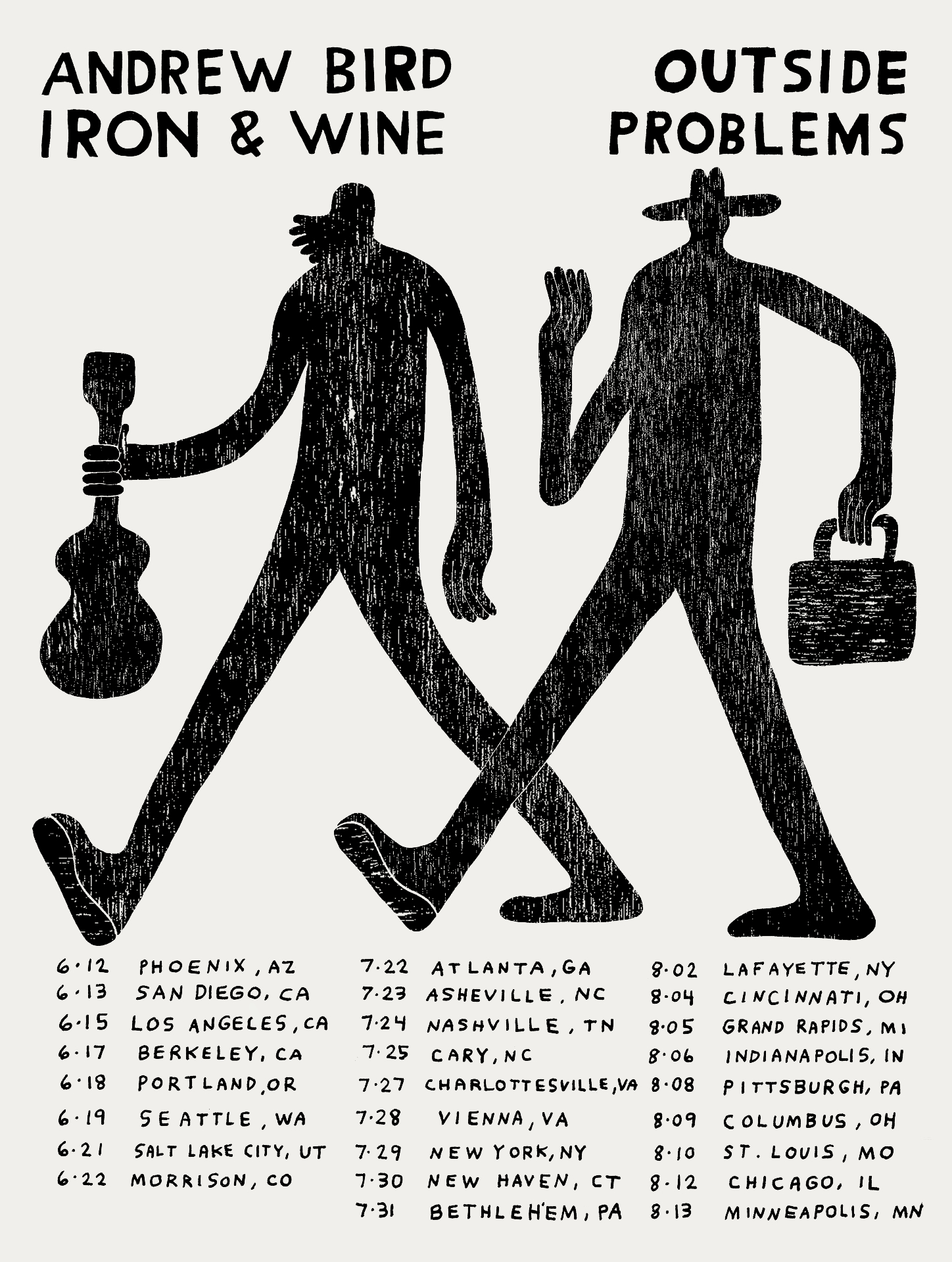 The upcoming shows will mark Bird’s first full-band tour in nearly three years, following a select number of appearances at Newport Folk Festival and Ravinia Festival in 2021, and an ongoing series of virtual Performance Now! live-streams. Iron & Wine’s Sam Beam recently returned to the stage on his Back to Basics tour of intimate acoustic sets last month and will continue with its second leg in March. While Andrew Bird and Iron & Wine previously planned to hit the road together for 2020’s Great Summer Stroll, which was ultimately canceled due to COVID-19, they are overjoyed at the opportunity to play even more cities this time around.

Bird is an internationally-acclaimed musician, songwriter and composer who has released 17 albums to date. Recording and touring extensively, Bird has performed around the world at festivals and renowned institutions including Carnegie Hall, Sydney Opera House and Walt Disney Concert Hall. Shortly after receiving his 2020 GRAMMY nomination for Best Folk Album, with My Finest Work Yet, Andrew Bird made his debut on the fourth installment of FX limited series Fargo. In March 2021, Bird released his latest project, These 13, an album co-written and recorded with his longtime friend and former Squirrel Nut Zippers collaborator, Jimbo Mathus. Throughout his career, Bird has also been a TED Talks presenter, a New Yorker Festival guest, an op-ed contributor for the New York Times and more. Follow Andrew Bird on Instagram, Facebook and Twitter.

Iron & Wine is the musical project of singer-songwriter Sam Beam. Born and raised in South Carolina, Beam was teaching film when his home recorded debut, The Creek Drank the Cradle, was released on Sub Pop records in 2002. Garnering both critical and popular acclaim, Beam was vaulted into the spotlight of the burgeoning indie-folk and Americana scenes. Now entering its 20th year, Iron & Wine have released seven full length recordings, numerous EPs / singles, and collaborations with Calexico, Ben Bridwell (Band of Horses) and Jesca Hoop all on their way to becoming a four-time GRAMMY nominee. Iron & Wine’s music has captured the emotion and imagination of listeners with their distinctly cinematic songs; in particular they’ve become synonymous with the movies Twilight and Garden State and continue to find a home in your favorite film, TV show or streaming playlist. As the world continues to spin – so do Iron & Wine continue on their path of releasing new music and touring. Follow Iron & Wine on Instagram, Facebook and Twitter.

Earlier this fall, the two musicians collaborated in Yosemite, teaming with La Blogothèque and Lucky Brand for a pair of breathtaking performances to support national parks. Watch Sam Beam join Andrew Bird for “Manifest,” before Bird delivers the acoustic debut of his yet-to-be-released “Fixed Positions”: