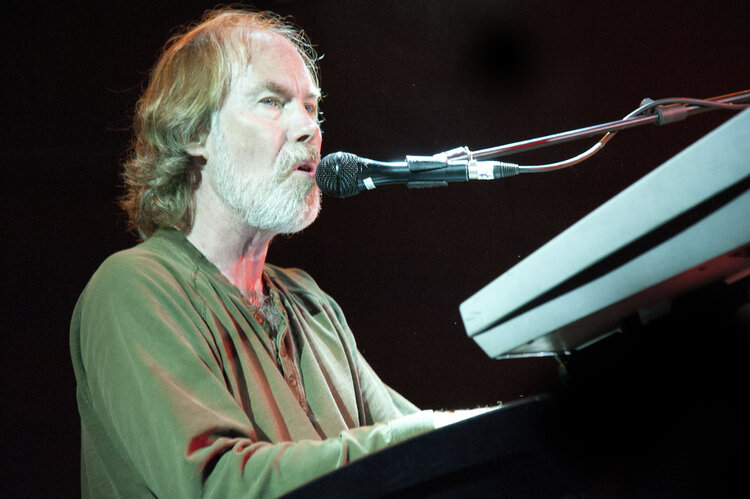 Bill Payne is the last man standing from the early lineup of the iconic band Little Feat.

In his press release announcing the band’s 2021 By Request Tour, publicist Dennis McNally – himself a legend as the 20-plus-year historian for the Grateful Dead and author of The Dead’s best biography Long Strange Trip – says of Little Feat: “Little Feat fused a broad span of styles and genres into something utterly distinctive, a mix of California rock, funk, folk, jazz, country, rockabilly, and New Orleans swamp boogie and more, all stirred into a rich gumbo that can only be Little Feat.”

Payne is a true Renaissance man and arguably the only single individual in the group’s 52-year legacy who could carry the load and maintain that band’s iconic trajectory 21 years into the new millennium. He is the band leader, keyboardist, and vocalist for the band. He is also the band’s principal songwriter having written “Oh, Atlanta,” “Time Loves A Hero,” “Red Streamliner,” “Tripe Face Boogie” and scores more with Little Feat.

The band got its name from the size of guitarist Lowell George’s feet. He was the founder and writer of such iconic Little Feat songs as “Willin,” “Sailin’ Shoes,” “Dixie Chicken,” and “Fat Man in A Bathtub.” After his death in 1979, Bill Payne told the rest of the band, “We are in competition with ourselves. So, be mindful of that. We’re gonna weigh what we like about the best music from anyone else against the best of ourselves. As it stacks up, if it feels good, we’re going to put out this record and get a new phase of Little Feat.”

Payne sets the bar height high on every project he undertakes. “I caught myself one time going, ‘Yeah, I’m the contract keyboard player. I’m a session player and this and that.’ I walked out of that session and said, ‘What the hell did I just do? I’m not in this to judge this artist. I’m there to make that artist’s music sound as great as it can be.’ So, I definitely did a collar on myself and took a long look in the mirror and said, ‘Take your fucking ego out of this for 10 seconds or for the rest of your life. When you’re pulled into play on something, I don’t care what it is, make the best of it.’”

Being a session musician taught him some things about ego and what fundamentally what being a musician is all about. Preceding the current Little Feat tour which he started after an exhausting tour with The Doobie Brothers, he released with Little Feat the song “All Boats Rise.”

“I was talking to Cameron Sears who was our manager at the time. He used that phrase describing something: ‘All boats rise.’ Some people were going, ‘Well, I don’t even have a boat. What do you mean when all boats rise?’ I said ‘It’s aspirational like liberty and justice for all. We don’t have it, but we like to aspire to it.’ I was like, ‘Come on, people. Put your head together. Go find a filmmaker.’

Payne took the still photographs for the video of the song.  “I asked my son to take some photos of me in the Malibu Canyon area, and at one point, I’m like, ‘Hey, let me try that camera.’ I pressed down to take the shot, and it was like when I pressed down on the keyboards when I was five years or four. It was like magic, and I took off from there.  I travel with a small camera these days.”

He’s also a writer. When Little Feat drummer Richie Hayward died in 2010, Payne wrote a 10,000-word article on his friend. “I love to paint with words. Richie Hayward was just an anomaly that every time he went on stage he’d go, ‘How was I?’ Most times I’d go, ‘You’re good,’ but toward the end there was one night, I think we were up toward New York, and I said, ‘Yeah, you weren’t. Richie, this is what I want to impart to you.

“’Every night you might want to think that (really important) guy is in the audience. Anybody from any town in the world we play, that drummer is coming to hear you play. It happens to every one of us up there. I don’t always go up and go r-r-r-r- face off and start playing. Most nights I do, but some nights I lay back a little bit and figure out where the heck I am on stage with regard to the music, get acclimated, and then jump into it. You’ll play a lot better if you do that. You’re an incredible musician anyway.’

“So, I hope it helped. I think it did. It was a very good conversation with the guy. I miss him. You talk about painting with words. This is something I did when I got into The Doobie Brothers, when I first got into it. Richie always had a saying. He learned this from some guy he ran into, probably in Iowa somewhere. The guy goes, ‘You’re not from around here, are you?’”

“‘What’s the name of your organization?’”

“You know, that kind of stuff.”

Keith Richards once told Payne that Little Feat and The Stones were part of an exclusive club both bands belong to. “He pulls me in, and he says we’re all part of the same cloth. Welcome to the club was what he was saying to me. It made me feel like I actually belong. (Most) people have similar lives that are the basic love, hate, fear, war. They don’t want to give it the kind of feelings we go through, the experiences we go through. I write about that from my experiences. I talk to people later when we run into them and they go, ‘Hey, in that song l really listened to my spirits or it gave me a new perspective on things.’ That’s pretty uplifting, too.”