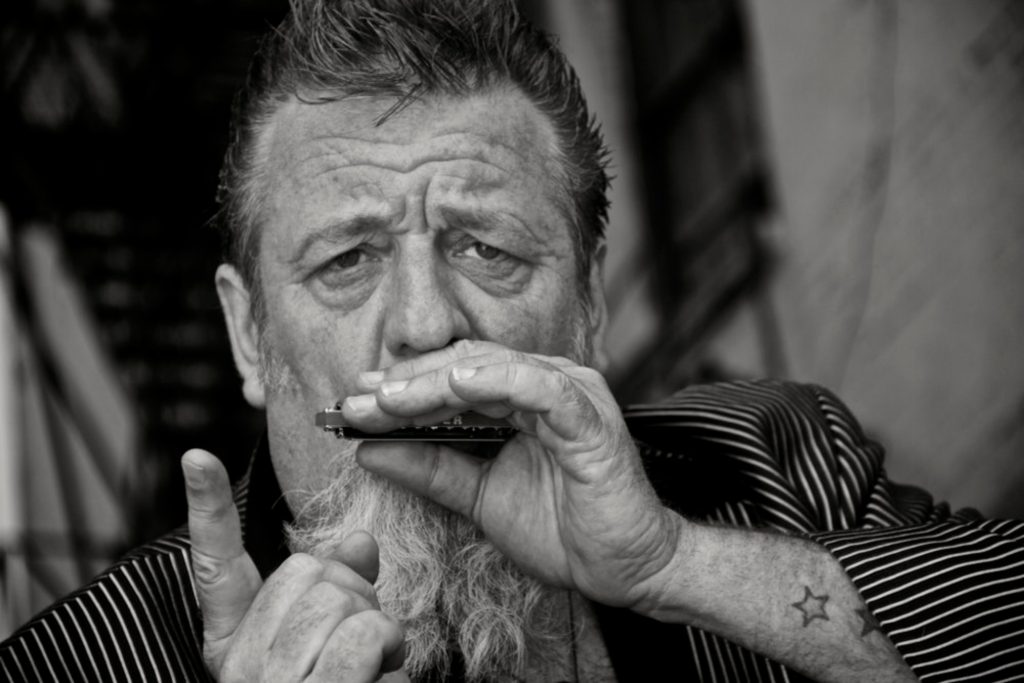 Harpdog Brown, beloved and award-winning blues singer, songwriter, and harmonicist, died on January 7th, 2022. He was 59.

The news hit me like a truck as I read the posts on both his personal and professional Facebook pages:

It is with great sadness to have to inform all of Harpdog’s fans.. friends.. and everyone he has touched.. that the legend himself passed away today in his home. Peacefully.. now he will be jamming with all his music mentors he talks of and loved to play their songs. He loved you all!

The last time I spoke with Harpdog was for an interview nearly three years ago. We were discussing his upcoming album at the time, For Love and Money. He was excited for the release, describing it as a “different shade of Brown.”

It’s funny because I’ve been in this racket now for 39 years, since I made the decision to join the circus life. My first band I put together in 1980. With brass, reeds and piano, and now I’ve come full circle. All my life I was forced to be a bandleader. Nobody was hiring harmonica players that could sing. So in order to pursue my calling, I was forced to put a band together, become a front man and a band leader just so I could hire myself as a harmonica player. I still blame James Cotton. I caught James when I was 17, and that was the turning point. I jokingly say he ruined my life. I could have been an accountant.

That was Harpdog’s sense of humor. He was a funny guy, but the truth rang out in all the stories he told.

Born in Edmonton, Alberta on January 28, 1962, he was adopted into a family with a musical mother who played slide guitar. He began playing guitar around age 15 in a local garage band. After several other projects he put together his own traveling blues band in the early 80s. He described being in a traveling band much like being in a circus, clocking tens of thousands of miles to play gigs big and small.

Even Jesus had to hit the road. The stranger in your own hometown? Yeah, nobody bought his shit either. He had to take it to the cities, and to the people. That’s what I try to do too. Music is my vehicle, but people is the business I’m in. If there are people, I’m interested.

His first independent release was Beware of Dog in 1992. Two years later he released Home is Where the Harp Is, that won him the Muddy Award for Best North West Blues Release, from the Cascade Blues Association in Portland. He is still the only Canadian to win it. Other awards include four Maple Blues Awards for Harmonica Player of the Year; a Fraser Valley Music Award for Blues Artist of the Year; and a Hamilton Blues Society Lifetime Award.

But it wasn’t about the awards for him. It was about the music and people for whom he played. Harpdog’s music was a mixture of classic, electric Chicago and funky New Orleans blues with a dash of Memphis spice.

He was based out of Vancouver, but traveled over 40,000 miles a year, mostly across Canada but also in the US and overseas. His face was craggy as the Coast Mountains and his goatee had the silver glint of snow. His voice was gruff, but powerful and he could ease notes from the harp like coaxing a bashful lover. All signs of a well aged artist.

But as my dad used to say, “It ain’t the age, it’s the mileage.” Mileage that Harpdog Brown was eager to acquire, as long as he could share his gift with the people who would come to his shows. For him it wasn’t about the money it was about the fun, and the love. He was once quoted as saying:

I speak the blues like it’s the truth, and it is. I do feel like I’m a servant of the people. A missionary if you will. Music can heal people if they pay attention to the messages in these songs.

Great words, but when we last spoke he reduced it even further:

Harpdog Brown left this world and the people in it wanting. Wanting more of his music, more of his stories, more of his truth. However, he also left behind 7 albums of songs, and a million memories. We’ll take what we can get and dry our tears with his blues.