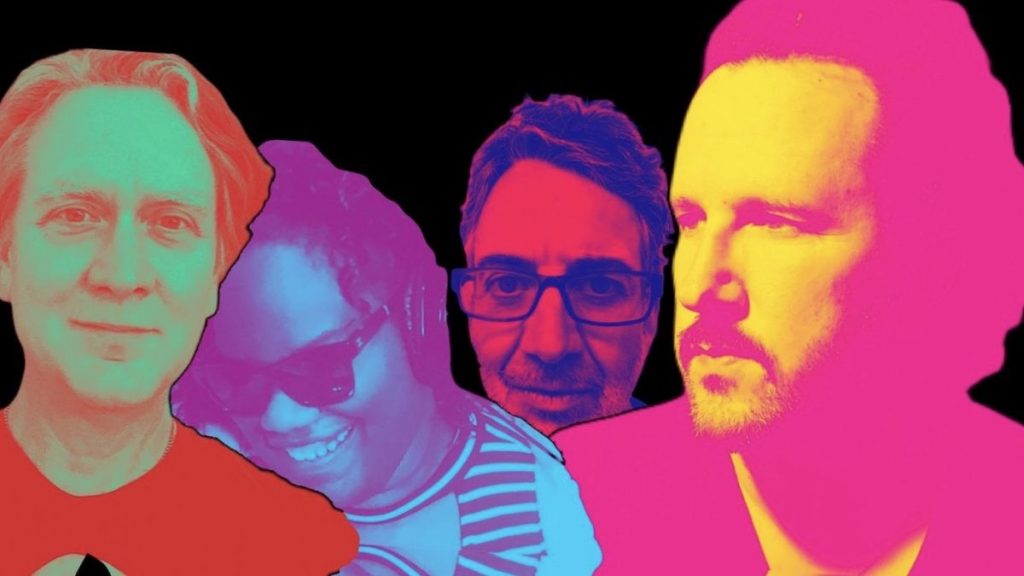 Where most Painted Shield songs are fronted by singer Mason Jennings, “Life In Rewind” spotlights non-binary band member Brittany Davis, an incredibly gifted multi-instrumentalist, songwriter, producer, and engineer based in Seattle. Davis is also blind, and describes themself as “a vessel of sound” who experiences music in spirit and colors.

“Mason initially wrote the song, and when I started to sing on it, it flowed so easy for me,” Davis observes. “I felt free to just create little changes here and there. It was a very natural fit and it gave me a chance to show off my soulful side with the band.”

Commenting on Davis’s role in the group Gossard writes, “They’re just a phenomenal musician and a charming and energizing human being. They’re an incredible engineer, write the most bad-ass beats and can jam like a complete crazy person. They can fit in on any song and find a spot and be so powerful.”

“It’s the assassination of genre,” says Davis, pointing to an album track list that includes full-throttle guitar rock (“Dead Man’s Dream”), nocturnal funk-pop (“Til God Turns the Lights On”), and percussive, synth-driven atmospherics (“Alien”). “We kill the idea that there’s a formula you’re supposed to follow,” Davis continues. “We make things our own. It’s like saying a word in another language, when the word in English doesn’t exist. Even if you can’t always translate it, you can still feel it.”

The four musicians, several of whom hadn’t even played together in person, tracked Painted Shield 2 at their respective home studios across America. Chamberlain, his tour dates as a member of Bob Dylan’s band brought to a halt by the Covid-19 pandemic, found himself at home in Los Angeles, creating beats, instrumental beds, and looped soundscapes using drums and modular synthesizers. A thousand miles to the north, Gossard — still fresh from the upper reaches of the Billboard Top 200, where Pearl Jam’s eleventh album, Gigaton, had climbed to Number 5 in 2020 — was generating ideas of his own in a Seattle studio. Jennings added melodies and lyrics. Brittany Davis did the same, tossing funky bass parts and synthesized guitar solos into the mix. They both sang, too — sometimes separately, sometimes blending their voices into lockstep harmonies.

The result is an album that takes aim at the head, the heart, and the hips. It’s a mix of the electronic and the organic — a moody rock album that genuinely moves, from the funky fire and industrialized guitar strut that gives “Til God Turns the Lights On” its unique swagger to the garage-rock abandon that supercharges “Falling Out of the Sky.” That sense of movement can be soft and deliberate, too.

“I’m so inspired by working with such inspiring, creative people,” says Jennings. “I’ve been releasing albums for nearly 25 years, but I haven’t done anything like this before. It’s very much an active project, too. We’re halfway through ‘Album Three’ already.”