An Evening with Daryl Hall and Todd Rundgren

With the talented Daryl’s House Band band plugging in dynamic sax, flute, electric piano and guitar solos, and Hall and Rundgren sourcing the best of the new and the old, this was an unquestionably successful opening night for all concerned. 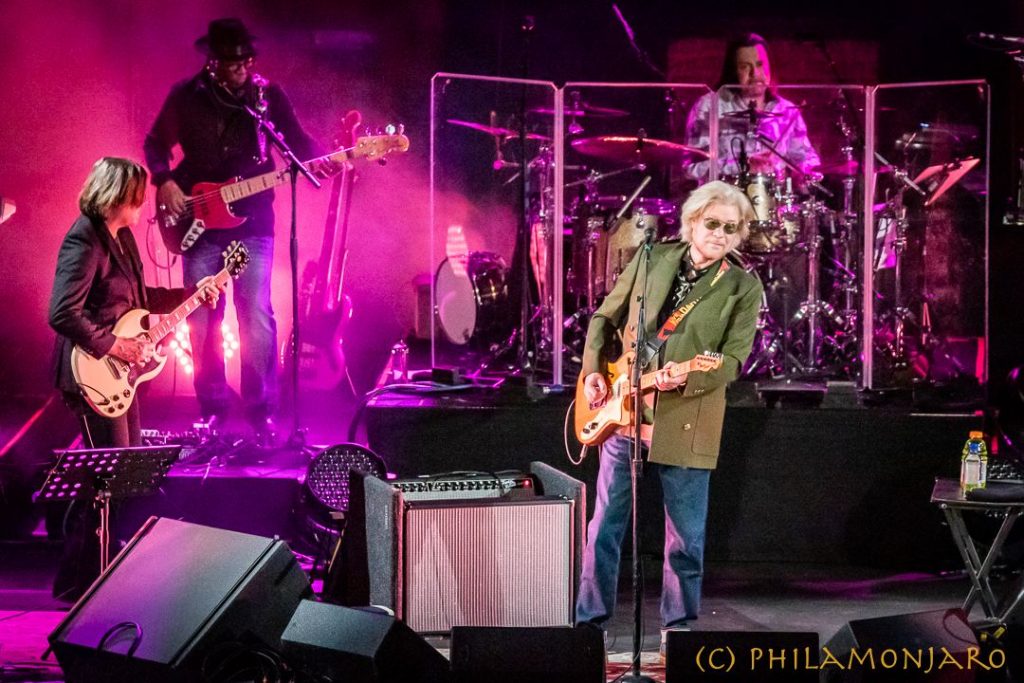 Opening night of the Daryl Hall concert at Auditorium Theatre in Chicago with special guest Todd Rundgren was a cause for celebration in more ways than one. First of all, both “blue-eyed soul” singers had an opportunity to entertain an intergenerational crowd with hits from their respective careers.

Secondly, the spacious Auditorium Theatre has superb acoustics and was the perfect setting for combining stylistic forces. Finally, audience members got to see up close Daryl Hall’s House Band, the versatile group of musicians who work on Live at Daryl’s House, the web-turned-TV phenomenon.

Musicians who return to the stage post-pandemic after a long time away have good reason to have stage fright. But for Hall, the stakes were even higher; this was his first tour in ten years. And Rundgren has rarely taken a break.

Hall seemed gun shy at first, but showed more confidence as he updated the audience about his premier solo retrospective, the two-disc Before After, featuring five solo records and songs aired on his program but never released.

Rundgren, looking especially youthful in his sparkling jacket and black slacks, walked animatedly back and forth along the stage, as he sang the minor-tinged melodies that grace his many radio hits.

Rundgren’s material spanned several eras with “Real Man” from 1975’s Initiation and “Love of the Common Man,” moving a year ahead to Faithful. But the gusty “We Gotta Get You a Woman,” which was his first U.S. Top 40 hit, underscored the ingenuity of 1970’s Runt. Talented guitarist Shane Theriot grabbed the spotlight with highly-charged solo work, before Rundgren introduced us to a shiny new member of the band:

“I bought me this guitar in Chicago. If weird notes come out, it’s only partially his fault,” he chided. He needn’t have worried about the latest member of the entourage– his solo was also breathtaking.

“It Wouldn’t Have Made Any Difference” from 1972’s Something/Anything? got a boisterous and affirmative reaction when the singer asked, “Do you remember this?” I was struck by the clever words and bittersweet Broadway appeal.

Rundgren’s voice has stood the test of time; he can hit the highs, the lows and anything in between. But more than that, he puts his feelings on the line, and the audience eats it up. And on the next guitar solo, he proved that he’s still a bona fide instrumentalist and one hell of a showman.

During the opening measures of “I Saw the Light” (another gem from Something/Anything?), a group of young people within my sightlines got up to dance in the aisles.

“Unloved Children” underscored the 1989 Nearly Human era. And “Hello It’s Me,” recorded with early group Nazz, struck a sweet note of nostalgia in age-old fans—Rundgren took liberties with the melody that brought a renewed vitality to the classic hit. Sans guitar, he paraded back and forth along the stage, his vocals rising and falling to the beat.

1973’s A Wizard, A True Star material centers around core emotions, and accordingly, Rundgren conveyed a deep sense of vulnerability on “Sometimes I Don’t Know What to Feel.” The band members did their part by adding beautiful harmonies on a medley consisting of “I’m So Proud/’Ooh Baby Baby” and “La La Means I Love You.” These American classics were previously made famous by Curtis Mayfield/The Impressions, Smokey Robinson, and The Delfonics.

After another cover that got fans dancing along the isles, Marvin Gaye’s, “I Want You,” Rundgren circled back to his own output with the exploratory “The Want of a Nail,” a further nod to the landmark album Nearly Human.

During the brief intermission, the crew had set up the stage to resemble Daryl’s House. Hall opened with “Dreamtime” from the 1986 Three Hearts In The Happy Ending Machine which featured exciting keyboard and sax solos and extraordinary drumming and percussion. The band was off to a superb start.

Hall took a minute to settle in: “It’s good to be here. It’s good to see you. We’re going to pretend it’s Daryl’s House.” He scanned the auditorium. “I love playing theatres. I enjoy beautiful surroundings.”

“This is such a jumping point. Now, I’m going to take it to you. You’re the first ones. I’m going to do a bunch of songs from the compilation albums…”

Then the band launched into “Uncanny,” a hit from his Hall and Oates collaboration. “Problem with You” from Laughing Down Crying (2011) tended more to the blues and featured an all-out jam session. To that end, Hall made a complimentary reference to rootsy co-producer T-Bone Wolk. “In a Philly Mood” from 1993’s Soul Alone was in-a-word hypnotic, complete with more expert keyboard maneuvers by Elliott Lewis and vocal gymnastics from Hall.

“Cab Driver” from the 1996’s Can’t Stop Dreaming days, took us back to The Best of Daryl Hall and John Oates. Hall reminisced about experiencing loneliness in London. In another collaboration, “Every Time You Go Away,” Hall asks: “Why do we lose so many tears? Every time you go away, you take a piece of me with you,” he sang, while exhibiting guitar acumen.

The crisp keyboard solo and sax at the outro was icing on the cake. At this point, the talented sax man, Charlie DeChant, who had stayed in the background to man the keyboards, flute and sax, came forward and was greeted with wild applause.

The set list seemed greatly balanced, but still, Hall had to take stock: “So, is this what you guys were expecting? I try to mix them up.”

Hall recorded “Sacred Songs” from the 1980 album of the same name with Robert Fripp; despite having contrasting musical backgrounds, the two musicians created magic together. (It was gratifying later on to watch Hall slip away from the full ensemble treatment and perform the title song on acoustic piano during the final moments of his set.)

“Babs and Babs” was somewhat of a specialty, as it was being unveiled for the very first time. A stripped-down cover of the 1983 Eurythmics “Here Comes the Rain Again,” which appears on the new album was as genuinely moving as the original. Hall namechecked former member and producer Dave Stewart, with whom he’s been working feverishly.

The touching “Sara Smile” from the 1975 Daryl Hall and John Oates album also found Hall doing a dreamy vocal. The band was burning hot when Hall kicked in with the soulful lyrics for another Hall and Oates hit, “I Can’t Go For That (No Can Do)” before launching into the piano-friendly “You Make My Dreams (Come True).”

Todd reentered the stage to cover Hall and Oates’ searing “Wait For Me.” While it was entertaining to hear each artist’s set, it was equally exciting to see what they could do together. After all, Hall and Rundgren share a lengthy history. Back in 1974, with Utopia, the Philly native performed in Central Park with Hall and Oates. That Hall and Rundgren have remained dear friends and musical counterparts became quickly apparent during this last segment of the show; they looked comfortable onstage in this more casual setting and their mutual respect for each other’s music was clear as well.

Rundgren switched gears to croon “Can We Still Be Friends” from his own Hermit of Mink Hollow, creating a bridge between the artists’ discographies. Rife with positive energy, this ballad has been widely covered by the likes of Colin Blunstone and Robert Palmer for good reason.

And then for something completely different, the band pulled out all of the stops for a lively cover of “Expressway to Your Heart” made famous by the Soul Survivors in 1967–bassist Klyde Jones knocked it out of the park.

The grand finale was “What’s Gonna Happen to Us” from Three Hearts In The Happy Ending Machine, which Hall introduced as being “sadly still relevant” in view of the recent war in Ukraine.

With the talented Daryl’s House Band band plugging in dynamic sax, flute, electric piano and guitar solos, and Hall and Rundgren sourcing the best of the new and the old, this was an unquestionably successful opening night for all concerned.

The 14-city American tour ends on May 22 in Austin, Texas.