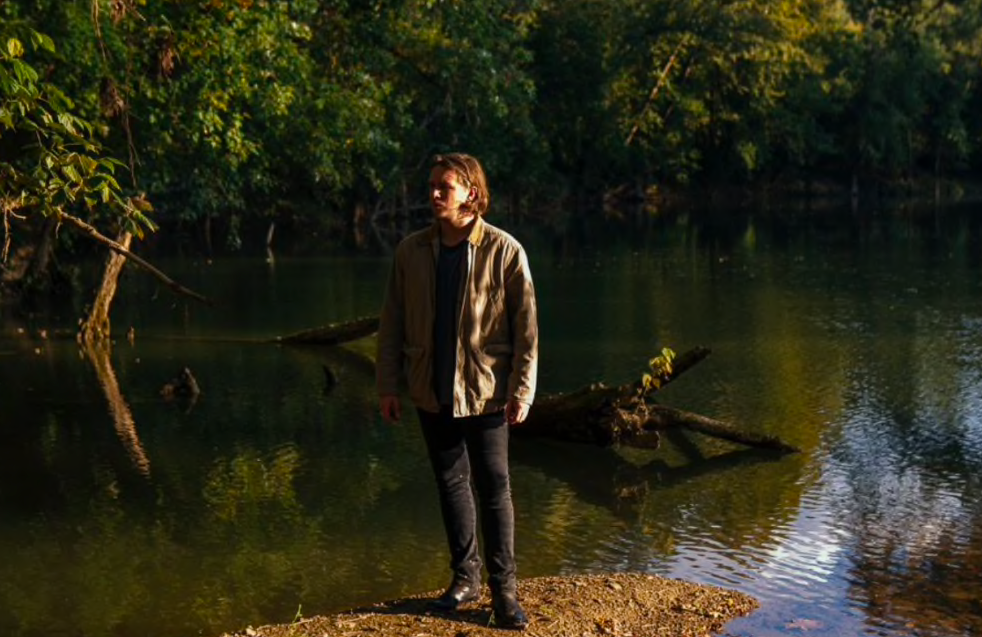 From a mountaintop in Eastern Kentucky, singer and storyteller Ian Noe writes away the banalities and mishances of life, transfiguring them instead into rustic ruminations that give expression to River Fools & Mountain Saints. These are the characters at the essence of his latest full-length album.

Following his debut Between The Country, his latest and brilliantly toned effort is a sonic tintype of Appalachia life. From old coal country to the present day, Noe sees this landscape and its folk as a wealth of raw songwriting material. He considers the river down low and the mountains up high and rhapsodizes, “You’ve got everything in this way! You can go all over the place with that type of landscape, and that’s how the writing starts.”

For this release, Noe chose to co-produce with Andrija Tokic (the Bomb Shelter) in Nashville, citing and celebrating the broad sounds heard on Alabama Shakes’ debut as well as Margo Price records. Recorded on reel-to-reel tapes, and with the luxury of time, Noe further expanded his sound by including special guests “Little” Jack Lawrence (The Raconteurs) on bass and Derry deBorja (Jason Isbell & the 400 Unit) on keys.

Upon hearing the album’s opener, it comes as no surprise that a precocious Ian Noe once played Neil Young’s “Long May You Run” at his fifth grade graduation ceremony. “Pine Grove (Madhouse)” is a barroom earworm from the outset with its lonesome, winding guitar. Recorded during the pandemic, the words capture helplessly feeling disconnected from time. And his voice summons (hard) living Kentucky heritage as he sings strikingly the words:

Stranded inside a madhouse, baby.

Down in old Pine Grove.

Been up for days

In a drunkards haze,

Just lit up by this stove.

We got the band in the basement, mama.

Fire on that mountain steel.

Or that old milk cow —

We’re working on this hill.

Hang up the wagon wheel.

“River Fool” wears a warm, glowing patina – harmoniously weaving in banjo, fiddle, and mandolin and every other idyllic nuance of the classic country form. Not just a homespun halfwit drunk on wine “shooting at the moon and squalling like a mountain lion,” but also the sentimental story of a Southfork Kentucky cult figure who hammers that CCR on his guitar down by the riverside.

When you make up rhymes and have no one to tell them to, ain’t that about as “Lonesome As It Gets”? Steel guitar strains are the cold, desolate winds that ebb and flow through the song of that title, something of a self-sketch inspired by living alone in his grandparents’ old house.

The home rule city of Beattyville, Kentucky is part of the Eastern Coal Field region now mired in poverty and an opioid crisis. Left in the lurch by the coal industry, it was recorded by a US census survey as the poorest majority white town. The community’s enduring hardships, as well as backbreaking, dirty labor, is not lost on him. Just as Jimmie Rodgers was a singing brakeman, Noe worked on an oil rig as a young adult while always playing and writing. “They say what you gain / Don’t compare to what you lose,” Noe sings on “Strip Job Blues 1984.” Anything can go wrong, namely explosions, when coal seams and coal dust are factored into an equation. Blues lyrics set to bluegrass, this track is an intensely poetic survey of the life-threatening hazards of strip mining for coal.

How do veterans re-adjust to civilian life? And what’s to become of them if their haunting thoughts must persist? “I was crawling up a ditch in Greece / About to end a man / When they stopped me at his heels / Never knew how they handled him / And don’t guess I ever will,” Noe sings before organ interludes add emotional weight to “Tom Barrett.” You could say it’s Noe’s “Sam Stone” in its affecting perspective of the soldier’s life after war. Dark enough to see the stars, however, the song operates sans drug references and has a bit more buoyant melody. Hard, slow percussion and driving upright bass like intentional heavy footsteps render “POW Blues” the more aggrieved companion song to the former. “Throw me out in the ocean / on unforgiving waves / I’ll take my chances a-floating / over rotting in this cage,” declares Noe in a POW’s POV.

The Appalachian-picking “Ballad of a Retired Man” shows love and respect for his late grandfather, who took the time to dance especially when his clock was ticking. “Mountain Saint” is a country blues about a weed-dealing hustle queen who runs trails where there ain’t no travelin’. “Burning Down The Prairie” starts gentle and folky, increasing in tempo, angst, and yet another electric guitar by the halfway mark – as if to convey a proper response to the unjust treatment of Indigenous people whose cultural history runs deep in Kentucky.

River fools and mountain saints, a title that came to Noe before writing any of the album’s songs, aren’t the only parts to this play. If roadside signs could talk, I bet they could tell a story. To Noe, they are the story. Old family photos or even a rusted can floating down a creek, as in “Appalachia Haze,” can be an inspiration to a poet. And as for “Road May Flood,” the closing ballad replete with silken strings, a literal warning sign calling attention to the region’s most frequent type of natural disaster. It seems the suitable setup for appending Bonnie Tyler’s ‘80s love song “It’s a Heartache,” lamenting that it’s “a fool’s game, standing in the cold rain.”