Spoon Hits on all Cylinders at Chicago’s Riviera Theatre 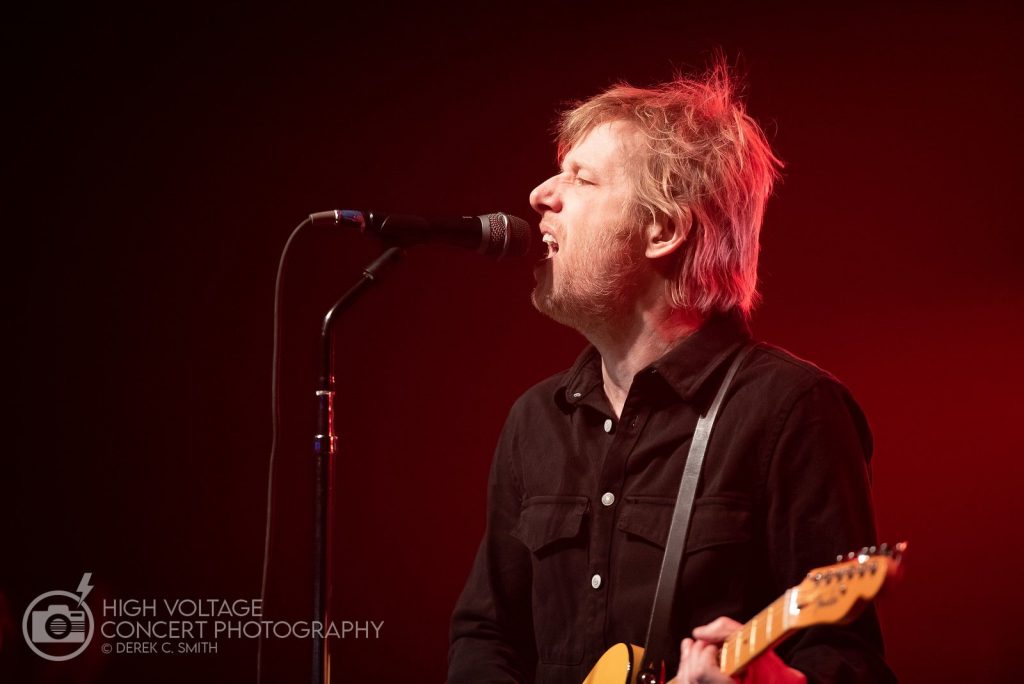 By any measure, it was a fairly typical April evening in Chicago. It was cool and crisp, with just enough wind whipping in from Lake Michigan to keep the crowd gathered outside the Riviera Theatre huddled close together – their hands in their pockets; their feet shuffling to keep the blood pumping. To the locals, it was chilly. To everyone else, it was freezing. But that’s the way we get by. We’ll go out in any weather for great music; and great music was to be had this evening. Spoon was in town.

It was the first show for the band after rescheduling the previous three dates in Philadelphia, New York City and Detroit due to a confirmed case of Covid-19 within their camp. Thankfully, the band – which consists of original members Britt Daniel (vocals and guitar) and Jim Eno (drums), as well as Alex Fischel (keys and guitar), Ben Trokan (bass) and Gerardo Larios (keys and guitar) – appeared healthy and in high spirits for their return to the stage.

At the outset of the show, Daniel quipped that his voice was a little ragged, so much so that he might sound like Joe Strummer by the end of the evening. Fortunately, his voice held for the entire performance. It’s a wonder, though, how the maniacal Fischel survived the evening.  His high-octane energy throughout the evening literally had him dripping sweat onto his keyboards five songs into the set.  If he wasn’t quickly dehydrated, I surely was by merely watching him.

It was a raucous performance all around, and one you should come to expect with any Spoon show. Indeed, touring behind their critically acclaimed and brilliant tenth studio album, Lucifer on the Sofa, Spoon showed what every one of the 2,500 fans in the sold-out theatre already knew: Spoon is one of the best rock bands of the past twenty years. Yes, they released their first three albums in 1996 (Telephono), 1998 (A Series of Sneaks) and 2001, (Girls Can Tell), but few bands can rival Spoon’s output of incredible albums since 2002 (Kill the Moonlight, Gimme Fiction, Ga Ga Ga Ga Ga, Transference, They Want My Soul, Hot Thoughts and the aforementioned Lucifer on the Sofa). Each one is chock full of superb songs, none of which are formulaic, but all of which are distinctively Spoon.

When my wife recently asked me to describe who Spoon sounds like, I could only tell her, “Well, they sound like Spoon.” In an industry crowded with imitators, it is all we can really ask for from a band. And there wasn’t much more that the Chicago crowd could have asked for at the Riviera Theatre.

Over the course of 21 songs and two encores – including songs from almost every album in their catalog, a rare gem (“Fitted Shirt” from Girls Can Tell), some personal favorites (“I Turn My Camera On” from Gimme Fiction and “Rent I Pay” from They Want My Soul), and several of their biggest hits (“Don’t You Evah” and “The Underdog” from Ga Ga Ga Ga Ga; “Do You” and “Inside Out” from They Want My Soul and “The Hardest Cut” and “Wild” from Lucifer on the Sofa) – Spoon left no stone unturned. The crowd was satiated, and although not eager to leave in the hopes of perhaps just one more surprise encore, they eventually made their way back into the chilly Chicago night air, comforted by the experience of another exceptional Spoon performance.

Also be sure to check out Margaret Glaspy who opened for Spoon at the Riviera Theatre.  Glaspy is a talented singer-songwriter and guitarist who has released two full-length albums (2016’s Emotions and Math and 2020’s Devotion).

As a performer, her perpetual smile and unbridled joy in playing her music was infectious.  You can’t help but fall in love with her. But don’t let the smile fool you. Glaspy’s lyrics are forceful and expressive, particularly so with her closing number – a new song titled “My Body My Choice.”

What stood out most about Glaspy, however, was that she did not take the stage to merely play a set. She was there to win over a crowd. She succeeded as the nearly full theatre was encouragingly responsive and vocal throughout her set.

For more information about Glaspy, including her albums and tour dates, check out her website.