The Blues Take Off From ‘L.A.X.’: LaRue/Alexander Issue An Album 25 Years In The Making

Listening to the whole of 'L.A.X.' you can’t help but hear and feel how in sync the two are in a nearly flawless marriage of guitar and bass in performance. 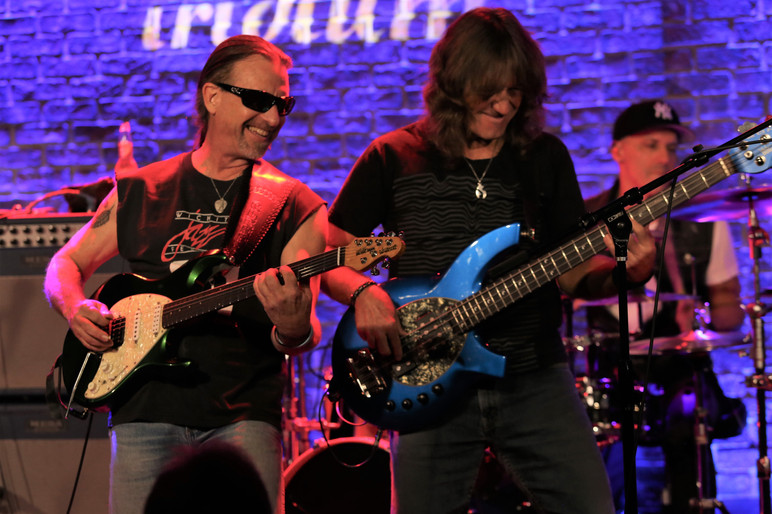 Sometimes a really good album sneaks out under the radar. Such is the case with L.A.X. from LaRue/Alexander. With songs like “I Can Have The Blues,” “Highway 96,” “Noble Red Man,” and a cover of the Beatles’ “Come Together,” the album is one gem after another. It has been available for some time now, which might lead you to wonder why it is just now coming to light. Chalk up another victim of the COVID pandemic.

Bass player Dave LaRue, guitarist Glenn Alexander, and drummer Van Romaine had recorded L.A.X. back in 2019 with plans to release and promote it via a tour in 2020. There is little consolation in knowing their plans were derailed by the greatest health care threat of the 21st century.

“We actually did finish it and had product right before COVID,” Glenn says. “But COVID hit and then nothing. I mean we were dead in the water.”

So yes, the album has been out for some time and is available on Amazon, Apple Music, CD Baby, laruealexanderlax.com, and through Dave and Glenn’s individual websites. Yet they regard it as new because “It is just now coming out in terms of people becoming aware of it.” They remain just as enthusiastic about it today as when they first recorded it. The enthusiasm is well-founded.

“Ahh,” you say. “So what is the hubbub about the album?” Glad you asked.

L.A.X. is filled with rock-laced, funk-infused, blues-based songs delivered with high energy. Take the song “F5,” for example. It packs as much energy and punch as the tornado bearing the same designation. And you have got to respect lyrics like, “You can run, maybe you can hide / From the biggest, baddest bitch, baby – F number 5!”

“Primal Need,” “I Can Have The Blues,” and “Stone Cold” all have the same drive. For those of you who have a primal need for a little more funk, or something with spunk, the leadoff track “Phoney Baloney” is for you. You will also like the song “Primal Need.” And LaRue/Alexander’s cover of “Come Together” breathes new life into the Beatles classic. “Dave brought that in and said he thought we could do something with it,” Glenn reveals.

“I was thinking we could do a really cool version of this song,” Dave says. “And if we played it more funk, we could rock this. And we just went from there. I brought it in, we made the arrangement, and it was fun. It was a fun one to do.”

“I wrote that about literally driving that highway many times in my Dodge in the process of moving east,” he said. “And when I did, ironically, literally the first musician that I met was Dave. And that is the gist of that song. Rolling down Highway 96 and leaving everything behind to come to a new place and create a new world. And Dave has been a part of that since the moment I arrived.”

Call it karma or a happy coincidence; the meeting of the two has resulted in a friendship and partnership spanning more than two decades. Harmony is the result. It is not just the harmony of pleasing musical sounds, but of the way Glenn and Dave approach their playing. Listening to the whole of L.A.X. you can’t help but hear and feel how in sync the two are in a nearly flawless marriage of guitar and bass in performance.

The group is largely a collaboration of LaRue and Alexander. Still, Van Romaine on drums is an integral part of the band. “He has been with us since the early days,” Dave affirms. “He continues to work with the both of us (in our individual side projects). We’ve stayed in the same circles. And he’s played on many of the tunes. And he’s played on many of our gigs. He’s part of our family.”

Yet, Van has a busy schedule of his own. He tours often with Enrique Inglesias’ band and a number of other stars including Kansas, Queen Latifah, and Ciara. “So he is busy a lot,” Glenn says. “He is our first choice.” “But when he is not available, we have a guy I play with a lot who is (Van’s) sub. A guy named Drew Betts,” Dave adds. “Great player.  He is one of those guys who is always prepared.”

The partnership is evident in their songwriting process even when the idea for a song starts separately from one or the other. It often begins when one says he has a snippet of a tune, or the verse section, or a hook. From there, Glenn says, “We ship it back and forth. Somebody comes up with the next part and we just keep hashing through things. Then we get together a lot and put the finishing touches on the tune.”

Distance necessitates their approach. Glenn lives in New Jersey while Dave is based in Florida. Sometimes, however, they will get together for a songwriting session. When they do, Glenn says things can get pretty fierce. Dave agrees. “A lot of things happen. Things (ideas) start flying around the room. It is hard to keep up sometimes,” they say with a laugh, quite honest with each other about what will work and what won’t.

“There are a lot of things that wind up in the trash can,” they agree. It helps not to be married to an idea, to let go of things if another idea will make a song better. Dave describes it as bouncing concepts off each other and moving the ball forward. “It may end up nowhere near where we started, but it is a cool process to be a part of.”

Most artists find it difficult to pick out one song on their album as a favorite. LaRue and Alexander have a particular fondness for the song “Noble Red Man.” Glenn was inspired by a book he read and from there the song evolved. “I had read this book called Wisdom Keepers,” he relates. “It is very powerful. The writers went to the reservation and interviewed some of the chiefs and tribal members. And it was powerful for me and we credit that on the record. The song was written from their perspective.”

He continues, “That is a song for us that as a trio is nearly impossible and we typically do not play live. It is the most produced song on the record. And for me it is one of my absolute favorites.” Dave shares that sentiment and says, “I love that tune. It is one of my favorites as well. The drums at the start set it up and it becomes a movie after that.”

Dave and Glenn would like to see it made into a video someday. To do it the way they would like to have it done would take an investor, though. “We are not going to do that one half-assed,” Dave says.

Until an investor comes along, you can listen to “Noble Red Man” on L.A.X. from LaRue/Alexander.