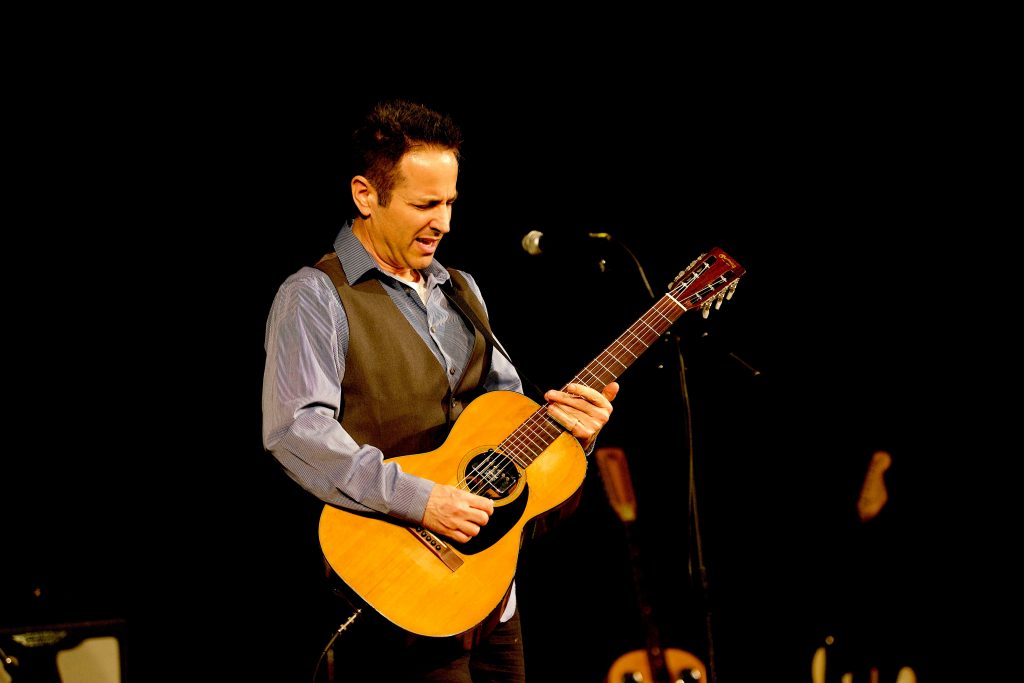 His passion for the slide drove Dennis Johnson to teach himself guitar and through a career that has included three albums to date. His first album Slide Show reached the heights of the Roots Music Report charts. His second album Slide Avenue rose to the top of the Roots Music Report radio charts, and his next album Rhythmland received national and international acclaim.

Now, Johnson has a new album in the works. Revelation is scheduled for release on July 15, 2022.

I learned a lot making this record from arranging and finding great grooves to recording unique guitar tones. It always is about the getting the groove first.  If you can find it, the rest flows naturally.

Slide guitar is a blues music staple, but not easily learned nor mastered. Curious to find out what drove a self-taught guitarist in the slide direction, we had to ask.

It was the vocal expression that you can produce with a slide. The articulation takes years to get down. But once you do, it’s really fun. Done right with dynamics, slide guitar can range from very subtle to very powerful. There is a wide range of emotions you can get with slide.

There is a really cool connection between slide guitar and a properly set up amp. With a dynamic amp set to the edge of breakup, you can get amazing variety of slide guitar tones from relatively clean to rockin with the dynamics of your playing and the volume knob.

As a younger man, Johnson was, as many players are, caught at a crossroads in life. Work a normal job, or dive headlong into becoming a bluesman. His answer came from a true Delta legend.

I met Honeyboy Edwards in San Francisco at a blues club. I had a profound conversation with him about the path of music. Really cool guy. He really illuminated the path for me to be a musician. Honeyboy performed during an amazing period of slide guitar evolution in the South. He was friends with Robert Johnson and so many blues luminaries. When Honeyboy tells you to play the blues, you play the blues.

Johnson’s evolution as a slide guitarist comes from years of dedicated work on pushing slide guitar to its limits.

In the past few years, I have really focused on articulations with a slide – types of vibrato, sliding up or down to a note, and moving the slide at various angles like a lap steel player to connect notes – which made my playing way more expressive. This resulted from years of dedicated practice motivated by passion for slide guitar.  I like to work on my weaknesses as a player and turn them into strengths.

Revelation has brought a major shift in tone to Johnson’s playing and promises to be a stand-out release.

Revelation is much more of a blues rock record. I mean its got the energy. There are rockin tunes, a great instrumental ballad, and some groovin roots stuff. The grooves, arrangements, and performances are really top notch.

We were fortunate to have a great team on the record, from Anton Fig on drums, Jonathan Stoyanoff on bass, and Bob Fridzema on keys. Chris Bell did an amazing job mixing nine of the tracks, and Kevin Shirley did a stellar job mixing one. It was really easy to work with everyone. When you have Anton Fig on drums, it’s really fun to play. He is one of the best drummers on the world.

I like notes to bark as Larry Carlton would say. Give me a Fender Tweed Deluxe with a 5e3 circuit and set it to where the amp is relatively clean with a light touch, but when you play a little harder the amp breaks up. Its emulative of the human voice changing at different volumes.

Don Nix certainly wrote a great song. I think people can relate to it. This song was chosen because the groove on the song really rocks and is a great foundation for slide. Also, Bob Fridzema played some great piano on the track.