In Tune With Pete Muller 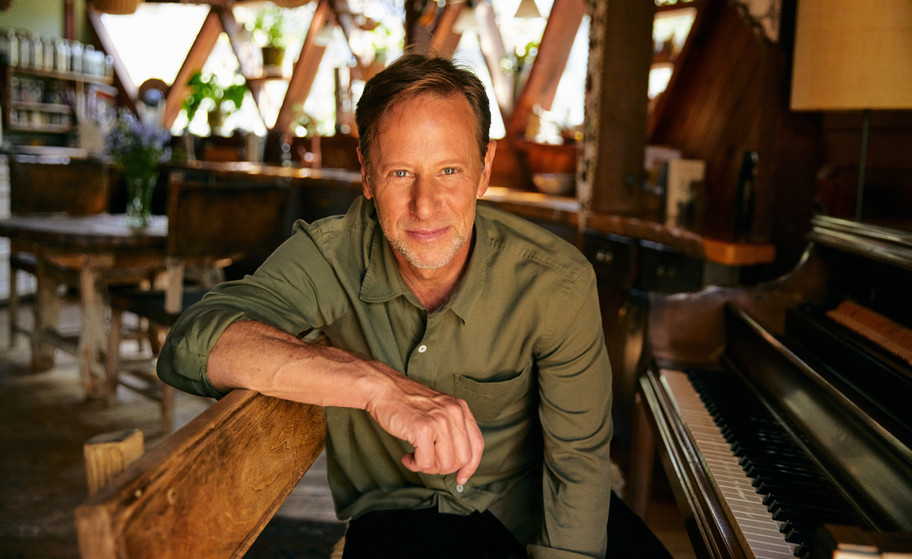 My first attempt to connect with Pete Muller was victimized by modern technology or, more likely, a failure on the part of its user – me. When we connected several days later for our conversation, he was very gracious and understanding of the snafu. He and his band, the Kindred Souls, were in the middle of rehearsals for an upcoming gig at a local restaurant. As rehearsal time for them is at a premium, taking time out for an interview is no small matter.

Pete Muller is a singer-songwriter hailing from Santa Barbara, CA. His fifth solo album, Spaces, is out today. The album is about the journey through life, Pete’s life in particular. For example, “I Still Burn” was inspired by his personal journey from California to New York and back. It was a journey in which he lost himself and then found himself again through music.

The album also “has quite a few songs about relationships,” he says with a laugh. “As it turns out that is what people like writing songs about.” Yes, it is what people like writing songs about but this album is very much Pete’s story. In song after song he is saying this is what I’ve experienced, this is what I’ve learned. Does that kind of honesty in song make him feel vulnerable? Or does it make him feel liberated.

“It’s kind of both,” he tells me. “I think one of my strengths is I like to put stuff out there. I really like to be vulnerable. I like to be authentic and direct. Whether I’m in pain or I’m happy. Here is what it is about. But of course, anything that is your strength can also be your weakness.”

“I’m married to a lovely woman,” Pete said with a smile, “one who really likes to be private. And when you are a songwriter you end up writing songs about what you know and part of it is your relationships. And there is a song about that on the album – ‘When She Gives Her Love To Me.‘”

That particular song starts out with the line, “She don’t like most songs I write.” It is a jazzy, bluesy tune, one telling a story about a relationship between two people who are not always in sync when it comes to likes and dislikes. Yet, it is a tender and devoted relationship, clearly about Pete and his wife. Whatever she may like or dislike, “she gives me all I need when she gives her love to me.”

Did she like “When She Gives Her Love To Me”? The answer is in the song. “You know, I thought that she would hate this song. Turns out she likes to sing along.”

Why write or play songs so personal in nature?

“There are two reasons I play music,” Pete explained. “One is it is the best way I know to get all my emotions out. I started writing songs right around the year 2000. Twenty years ago and I went through a really tough heartbreak. Kind of devastating. It surprised me and I learned a lot… And I started writing songs. That was a way to process the emotion and get it out. To get healed. To get whole again.”

So the one reason is songwriting provides a way to help him figure out what he is feeling. The second reason? “I love being able to connect with people and inspire them. And I love that. When people come up to me and say, ‘That moved me,’ that is a wonderful feeling.”

The album has a number of very relatable songs. When the band listened to the final recordings all agreed “Gone” was the strongest.

“I was the most emotionally raw when I wrote that,” Pete said. It is a powerful song, full of anger, full of determination to learn, and full of heartbreak. The rawness of the pain he felt is palpable. There is a recognition life will get better but for right now, “I’m just gone.” Simple words but ones that everyone at some time or other in their life has felt.

Then there is “Tin Palace,” a song reviewed by American Blues Scene in February. The Tin Palace is a real place, one where you can breath, relax, and become your best self. You can experience pleasant moments, sunshine, gentle breezes, and memorable company there. It is a place where sunshine gives way to “raindrops on the rooftop (that) make such a soothing sound.” The song has its origin in a chance meeting with a woman named Wendy at a jam held by Quincy Jones during the Montreux Jazz Festival several years ago. Pete and Wendy struck up a conversation and kept in touch every couple of months or so after that.

When Pete was going through “some stuff in my life” Wendy invited him to come to a place called the Tin Palace. She invited some other friends to come visit as well and, true to her word, they all found a way to heal there.

Where is the Tin Palace?

Pete laughs when he recalls her telling him, “I can’t tell you until I know you are coming.” He went for weekend, found himself healing, and found a subject for a song as well. Although he still cannot reveal where the Tin Palace is, the video was shot there and everything in the song is true – including free sardines for an egret named Tosha. And while we all may not be able to go to the actual Tin Palace, we all need a place where, as Pete says, we can “breathe, relax, and become our best selves.”

We also talked about Pete’s work as a board member of the Live Music Society, a charity he helped start. They have supported independent venues struggling in Covid times. He also has partnered with the Berklee School of Music to save the legendary Power Station recording studio in NYC, which has hosted the likes of Bruce Springsteen, Paul Simon, David Bowie, and Bob Dylan.

Spaces features Skip Ward on bass, Dave Silliman on drums, Rob Mathes on guitar, and, of course, Pete’s backing band the Kindred Souls. Kindred Soul Missy Soltero shares lead vocals on “Light Up the Night,” a song about loss, seeking redemption, and ultimately hope. It is definitely one of the best songs on an album filled with some of the finest songs anyone could ask for.

In addition to Missy – who handles percussion for the band – the Kindred Souls include Aubrey Richmond, on violin and guitar, and John Whooley, a multi-instrumentalist on guitar and sax. Long time Kindred Soul Martha McDonnell joins the band whenever her schedule allows. We will be hearing more from Pete and the Kindred Souls in the months to come.

For now, though, Pete Muller and the Kindred Souls will be on tour in May and July. Taking June off? “That’s right,” he said. “When I go on tour it’s typically for two weeks, two and a half weeks and then I come back to see the family for a while.”

That is Pete Muller – being as kind as possible and as giving as possible while making spaces for family and those he meets along the way.