"I decided to cover 'Dust My Broom' because of Robert Johnson and Elmore James." 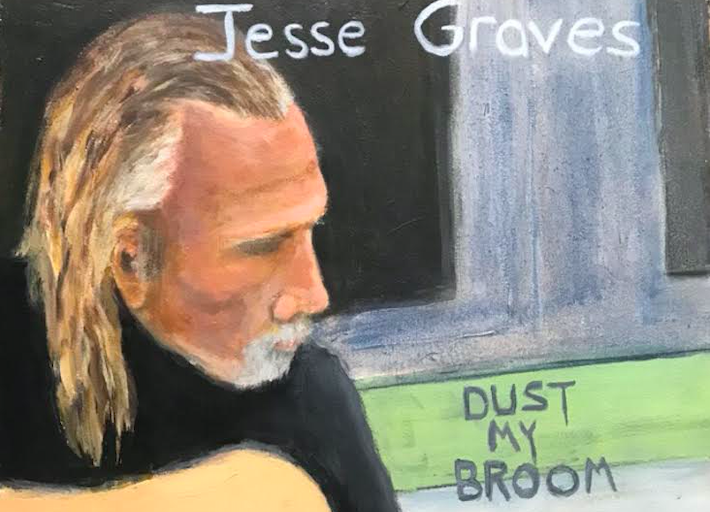 Jesse Graves, whose real name is Michael Floyd, is an American Blues guitar player and singer. He is known for playing Acoustic Delta Blues in the style the songs were originally written circa the 1920s and 1930s. He started playing music in the 1960s, immersing himself in the East Coast folk music scene. Johnny Shines told him, “Son, you got bluesman shoes, and that’s enough.”

With Shine’s encouragement he sought out Reverend Gary Davis and Son House. In performance, he plays his own music as well as covering his favorite artists, Muddy Waters and Robert Johnson. Jesse has played with and opened for: Muddy Waters, John Lee Hooker, Taj Mahal, Bonnie Raitt, Tom Waits, Sonny Terry and Brownie McGee, Little Feat, and The J. Geils Band.

Jesse released his debut record in 1972 on his own label, Gazebo Records. The album was remastered and re-released in 2018. Jesse’s 45 single “Dust My Broom” is remastered and now available.

Of “Dust My Broom” Graves says:

I decided to cover “Dust My Broom” because of Robert Johnson and Elmore James. In the early 1970s, I wanted to give it a different twist. So I did. I recorded the song twice; Once for my full length 33 Gazebo vinyl album and another version was released as a 45 single with “Jookin’” as side B. John Davis, Ted Estersohn, Gordon Reeves, and myself played together. We did two versions, one for the album and one for the single.

When I played the song live during my set, it was very well received. I went live on WMMR in Philadelphia with John Davis on Gene Shays show. He introduced the song as “Dust My Boots” and I had to correct him. The thing is after about five years after the single, I dropped the song from my set and didn’t play it anymore.

The 45 came out a couple of years after my 1972 album and only 100 of the 45s were pressed. I sent most of them to radio stations. Michael Tearson was with WMMR and he gave me my first airplay. After the record came out, I started getting airplay on college radio stations and MMR in Philadelphia.