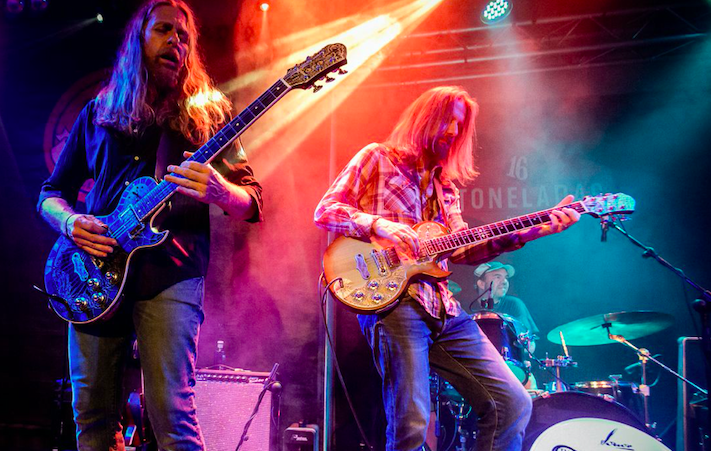 This Chicago Quartet has been hard at work touring and recording since their founding in late 1998.

American Blues Scene caught up with frontman Jeff Massey between their European/UK and U.S. tours.

The 2022 Re-Turn Of The Wheel release plays off of the 2020 release of Turn of The Wheel. This is the first for your Europe fans hearing these tracks live, Which song(s) is/are proving to be a fan favorite?

Response to the new material has been great. Seems like “Salvation In Time” is going over really well.   They love those long guitar jams in Spain! Been testing the new material out in Belgium and the UK as well, and the reception has been fantastic. “Shift” and “Broken Spirit Blues” are fast becoming staples for us every night.

ABS: What new songs are emerging as your personal favorite to play live?

“Salvation in Time” is my fave. I really enjoy playing all the material.

ABS: How are Europe and UK fans different? Is there a noticeable difference from the states?

Really music fans are music fans everywhere you go, but I guess I notice some minor differences. Spain is a bit more enthusiastic in general, although we have had some great shows in Germany and the Netherlands too. UK fans seem to really be watching and taking it all in. Hard to say, really. The vibe and your surroundings are always going to contribute to the magic of a good show, and that could happen anywhere.

For example, we just played the 100 Club in London and you can just feel the energy in that place. Because you’re standing on a stage that McCartney, Mick Jagger, Peter Green and The Sex Pistols once stood on, to name a few.

ABS: What do you find inspiring when you tour Europe?

The crowds, the atmosphere, the older architecture, the whole scene really. We really enjoy it. Plus when you get into a flow of touring and playing a string of shows night after night the band really starts running like a well-oiled machine.

ABS: Next, the UK, then back home? What next? Recording, break, new dates getting booked?

We will be doing shows in the States mainly around the Midwest and some down south in Tennessee, North Carolina, Georgia, etc. As far as I know we will be touring Eastern Europe in October. Mainly Poland.

ABS: What bands/ artists are your most personal inspiration?

Chicago is a fantastic city, but I don’t really have my finger on the pulse of what’s going on musically because we only play our hometown a couple times a year and stay on the road. Always great playing Chicago, though.

ABS: Is there anything that I didn’t ask that you want to share?

Well, we will be out touring all over so come on out to a show real soon!