'Everybody Let's Roll' has a street date of August 19th via Blue Heart Records, but pre-orders begin tomorrow July 22nd. 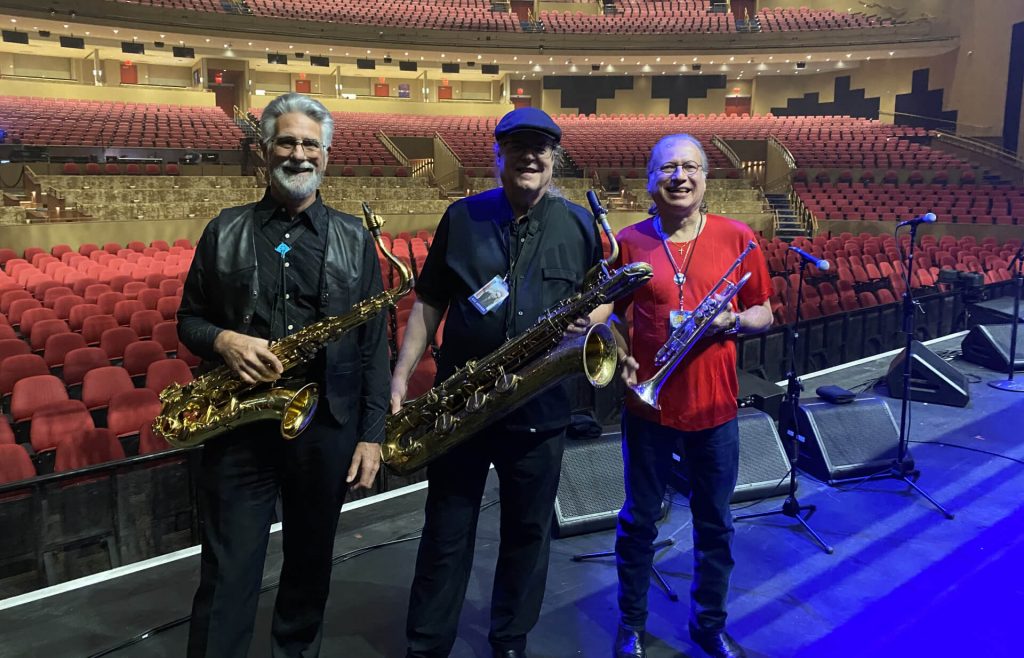 Twenty-five years in the business is cause for any group to celebrate, especially in a specific niche often overlooked or deemed as a sideline. The Texas Horns have been featured as the ‘house horn section’ at dozens of big music festivals and on the Legendary Blues Cruise and have played on albums and toured with an array of renown artists, earning Grammy Nominations, Blues Music Awards and Living Blues Critics’ poll awards.

Their third album, Everybody Let’s Roll (Blue Heart Records), is a testament to their years of hard work and genuine fun with thirteen tracks including eleven original compositions, presenting what they call “Their own set of rockin,’ sophisticated blues and R&B music,” clearly establishing The Texas Horns as, not only “sidemen,” but also recording artists and songwriters in their own right. The trio invited special guests to join the party including Jimmie Vaughan, Mike Flanigin, Carolyn Wonderland, Carmen Bradford, Johnny Moeller, Marcia Ball, Anson Funderburgh, Mike Zito, Guy Forsyth, and Michael Cross.

We wanted an upbeat party song that would introduce everyone to The Texas Horns, and invite folks to dance and have a good time. Carolyn Wonderland was the perfect choice to sing the vocal lead on “Everybody Let’s Roll” with her exuberant bluesy energy!

Mike Zito leads the ensemble with his gritty vocal on the driving tale of hard luck and trouble “Why It Always Gotta Be This Way.” The zippy jump blues “I Ain’t Mad With You,” is the first of five instrumental tracks and features hot licks from Matt Hubbard on keys, Johnny Moeller on guitar and of course blazing horn lines. Guest drummer, Tom Brechtlein, lays down the funky New Orleans beat, and Michael Cross calls out the party moves for the spicy dance number “Alligator Gumbo,” and then Austin’s Guy Forsyth preaches the wisdom of living life to its fullest during “Die With My Blues On.”

The horns get a workout on the expansive arrangement of a deep cut from Abbey Road that turns the psychedelic blues “I Want You (She’s So Heavy),” into a 70’s horn funk showstopper. Living legend Jimmie Vaughan lends his vocal and fret board skills to the slinky “Too Far Gone,” with Mike Flanigin on B3 organ and Jason Corbiere on drums, to make it feel exactly right. Texas born jazz vocalist Carmen Bradford blows the doors off on the hard swinging “Watcha Got To Lose” that features hot blues harp from Kaz.

Al Gomez blows serious chops on his trumpet for the salsa flavored “Apocalypso.” Guy Forsyth handles the vocals for “Prisoner In Paradise,” a dynamic track that has a sophisticated Blood Sweat and Tears feel. Each horn man gets a moment to shine on the funky instrumental “The Big Lie,” and Kaz takes over the lead vocals on “Ready For The Blues Tonight,” as Marcia Ball tosses in boogie-woogie piano on the swinging affirmation.

The set ends with The Texas Horns, Vaughan and Flanigin breathing new life into a Chicago Blues classic “J.B.’s Rock,” the way they have for decades of road work together. An emblematic finale for a masterwork production from an iconic group.

The Texas Horns are currently on tour with Vaughan, and will again be opening shows for Eric Clapton in September of this year.