Neilson’s appearance on the eleventh day of the 12-day festival coincided nicely with the release of her latest album, 'Kingmaker,' which dropped the day before her show. 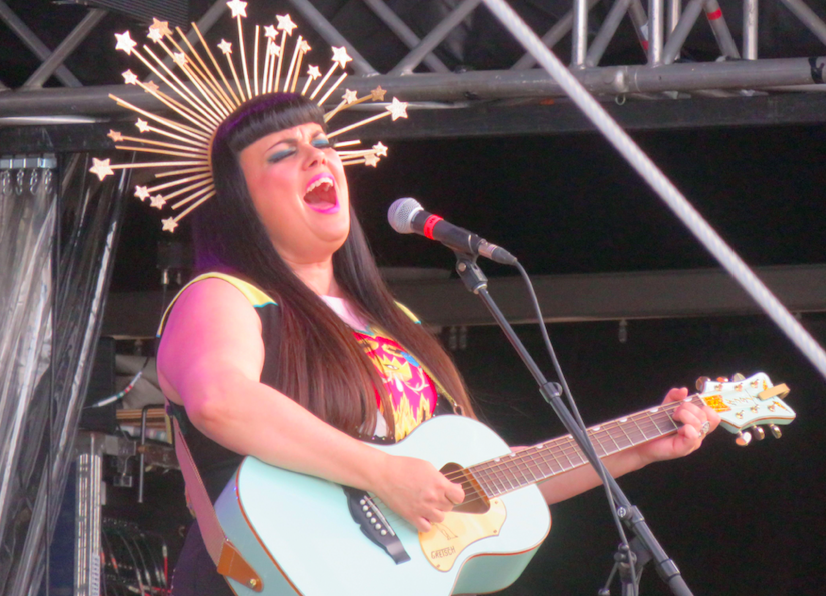 When Tami Neilson strolled on stage for her July 16 show at the Festival d’été de Québec (FEQ) she had the audience’s full attention before she even sang a word. Neilson’s stage get-up included a crown, not the kind that modern royalty would normally sport but more like something fit for an ancient Aztec queen, or perhaps a member of a Mardi Gras krewe. Neilson kept the crown on for her entire performance and by the time the show ended fans were ecstatic to have witnessed the musical coronation.

Held annually in Québec City, FEQ is not only the premiere music festival in Canada but one of the largest in North America as well. Neilson joined a diverse lineup of over 120 acts that also included Alanis Morissette, Marshmello, Charlie XCX, Rage Against the Machine, Femi Kuti, Sum 41, Garbage, Luis Fonsi, Death from Above 1979, Halsey, Ludacris, Spin Doctors and lots of bands from Québec and elsewhere in Canada. Neilson’s appearance on the eleventh day of the 12-day festival coincided nicely with the release of her latest album Kingmaker which dropped the day before her show. Neilson and her backup, guitarist (and brother) Jay Neilson and drummer Mark Mariash played a set that included about half of the songs on the new record.

The self-penned “Ain’t My Job,” the closing cut on Kingmaker, served as the opening song of Neilson’s 11-song set. Jay Neilson got so excited playing the opening groove that he broke a string on his guitar, something Tami teased him about after the song ended. “Did you break your guitar on the first song?” She was playful about it and told the audience that she could rib her guitar player since he was family. After playing “Walk (Back to Your Arms)” from her 2014 album Dynamite Neilson made reference to her crown, joking, “This is my casual outfit” while adjusting the headpiece and saying, “We need to wear crowns more often, right, girls?”

Neilson’s between-song patter on the evening often offered wisdom dealing with female empowerment and she was candid about how she had been manipulated by men in music business dealings of the past. Commenting about “Daughter Not the Son,” a cut that imagines the “king of country music” as a woman not a man, Neilson volunteered that Dolly Parton would be her pick for the royal title; during the song Tami namechecks Kitty Wells who she opened for when she was just 10 years old.

Other songs from Kingmaker were the title cut, “Careless Woman,” that Neilson performed sitting down so that she could clap and slap out a rhythm on her legs; and “Green Peaches,” a cut that is about the exploitation of women that’s lyrically cloaked in the metaphor “Eating green peaches right off the tree.” While most of Kingmaker features Neilson singing in a style that is boisterous soul, she is also very accomplished in country, the genre that she started out in as a youngster. Kingmaker features the great pure country cut “Beyond the Stars” on which she duets with Willie Nelson; for this show Jay sang Willie’s part. Co-written by Tami, the song is instantly recognizable as perfectly fitting Willie’s oeuvre.

Neilson, a native Canadian and longtime resident of New Zealand, sprinkled her commentary with thoughts about both places, joking about being from Toronto by saying, “Nobody’s perfect” and saying how much she misses her late father who passed away seven years ago. Particularly touching was her explanation of how she discovered a snippet of a song her father was working on (everyone in the family is musical and performed together as The Neilsons) and developed it into a finished song. She also spoke on how some folks tend to think that all musicians are rich, before playing “10 Tonne Truck” – the joke being that musicians make so much money that they need a sizable conveyance to move it all. Also touching was the set’s finale “You Were Mine.”

Most of Neilson’s upcoming performances are in New Zealand and a complete list is available on her website.