Shemekia Copeland is setting the trend for contemporary blues women on her new album 'Done Come Too Far.' She tells it like it is, prays to God, records with musicians from different genres, plays for the U.N. and President Obama, and flies into the frontlines of a war zone to play for our troops. 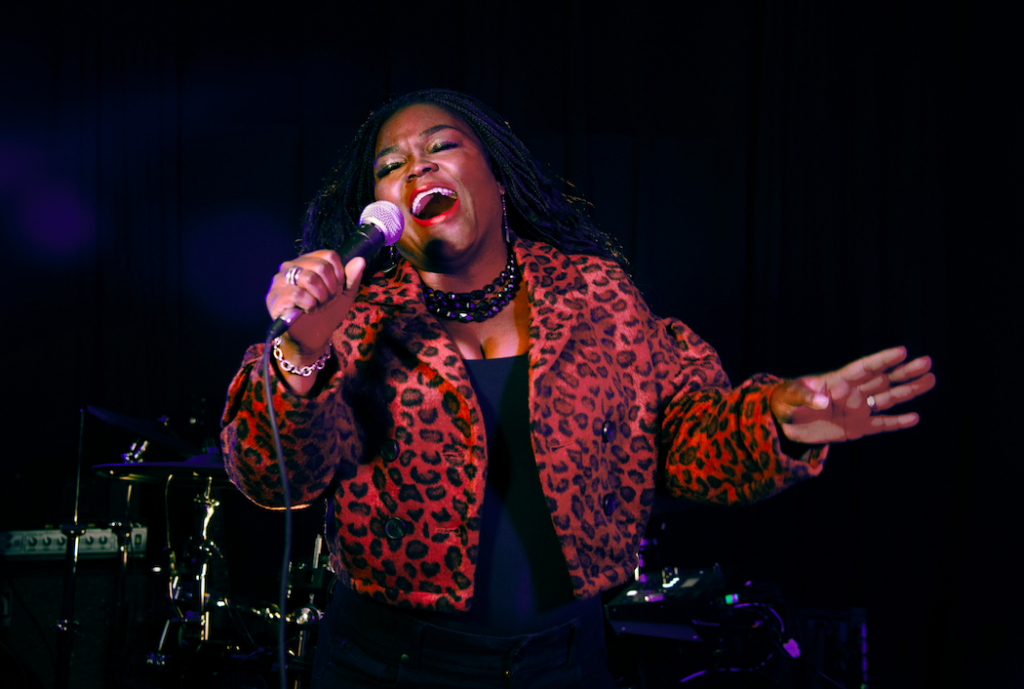 For a genre that purports to be “the truth,” blues has forever been behind the times in addressing the 800 lb. gorilla in the room. And that is, the prejudice in race relations that’s been so eloquently brought into focus in the Black Lives Matter movement. Pain and suffering have played a big role in blues music, but almost never does it address head on the focal point of that issue, the prejudice that forces black parents to have “The Talk” with their children about how to handle yourself when stopped by a policeman who may kill you if you even look at them cross-eyed.

Shemekia Copeland addresses that issue head on with her new album, Done Come Too Far, releasing on August 19th.

“Being an officer of any kind is hard work and a hard job, and I’m so grateful to anyone who is willing to do it, and most of them I’m sure are good, but you know what they say. You only need one bad one for me to ruin a life, and that’s what we’re dealing with right now. You just pray that you don’t run into the bad one, and I’ve been fortunate that I was myself running into decent people, decent law enforcement and stuff like that, but you hear about it all the time, and you just have to pray. I don’t know what else to say or do. That’s what I do. I am constantly praying, constantly.

“I just love making these records so much, I feel like I’m making a difference because I basically did my goals ever since I had my kids. Like how do we make the world a better place in some sort of way through music, through my platform, and so I’m happy.

“Done Come Too Far is the end of my trilogy. I know that these were the records I was making for now, and this for me was the finisher. So, there was a whole lot I should say in that record and we accomplished it.”

I told Shemekia that I always think back to Sam Cooke and “A Change Is Going to Come” and how he changed history in 1965. This record is going to do the same thing in the 21st century. She paused before she responded. “Well, you know what I say, from your mouth to God’s ears because you don’t have to change the whole world. You just do it one person at a time. And I think a lot of the issues we have in our country is that instead of us listening to one another and talking things out, we put these guards up, and we don’t listen. We just automatically have to get our point across.

“I’m angry, and you’re angry, and there’s like two bulls in a bullfight, and that’s what happens instead of just using your brains thinking about it. I constantly tell people all the time if people would get off the idiot box which is the television and social media and all that stuff and actually get out there in the world and meet people, have conversations with people, you can learn from one another. But no. We don’t see that. We just choose to sit home, watch TV and judge everything and everybody, not knowing what’s actually happening. And to me it’s one of the biggest problems we have in this country, because communication is key.”

I told Shemekia the problem I have is the people I’m communicating with one on one are picking their news by whatever fantasy is their Wizard of Oz for the day.

“That’s another thing, too. The information you get, if you’re not getting the right information, you’re screwed. They always say, ‘If you get diagnosed with a disease, go see another doctor.’ You know what I mean? Don’t take the word of one. You gotta get different opinions. “That’s not what we do. So, to me, it’s all American to get all the politicians. Put stuff together, and it’s us against them, and we might actually be able to get something done, but for years they’ve been masterful at pitting us against each other over stupid stuff while they’re in the background running our lives. You know, we’re fighting over toilet tissue while they’re ruining our lives.”

As a music journalist I’ve discovered the strength of us and by us I mean with a capital U is that we’re all so different. And when we pull together, all those differences make us stronger than the rest of the world combined, but we’re not getting it right now. What Shemekia is doing here is a step in the right direction, and I applaud her for it.

“Well, thank you. You know, I said to John (John Hahn is her manager and principal songwriter) when we were making this record, I said it could do wonders for my career or end it. You never know, but no matter what, I’m willing to take that risk.” (chuckle)

I’ve always loved the fact that John writes so much of her material. I asked her if he writes most of the lyrics and Will Kimbrough wrote most of the melodies?

“Yeah, that’s pretty much how it was. We’re such a great team. First of all, we’re all very like-minded. So, that’s a big deal. That’s hard. I don’t think most people – you would get it, but many people don’t. It’s like having clothes tailor-made for you. And John and I have been at this since I was eight years old. I’m 43 now. So, he is literally one of the closest people I have in my life. We talk every day. Sometimes we’re on the phone for an hour or more about everything. He is literally in my brain. I don’t know how he knows, but he knows what I’m thinking before I’m thinking.”

I asked her what she thinks it is about his background that makes him so compatible and a compatriot of hers when so many white people don’t get it at all?

“Well, because John helped raise me since I was eight, and Cindy (his wife) and John came to Harlem when it was dangerous, and white people didn’t come there. It was literally a war zone in some ways. Everybody knew not to come up there. But we were there. And guess what? They came.

“I was already 18 when my father died. So, I was a grown woman, and I was very much raised. I had great parents. My mom and dad, biological ones. I say I had black parents and white parents, but I was very much raised. When my dad did pass, he felt comfortable knowing John was going to be there, looking out for me and he was right knowing that. And trust me, my dad did not want to leave that to anyone. John would have been the only person in the world that he would trust with his – one of the most special things to him which was me, because my daddy loved me.”

I would have loved to have been in the studio with Shemekia when she did “Done Come Too Far.”  I asked her if Will Kimbrough, Kenny Brown and Cedric Burnside did all this together or was it phoned in?

“We were all together. It was awesome. I had never worked with Cedric that way before, and I just absolutely love and adore him. So, I was honored to be there with him, and it was a wonderful experience and Kenny Brown, he’s so talented.’

“I love not doing the popular thing. You know I want to do things that are different. I don’t want to do what’s popular and expected. Me, I just prefer to shock the hell out of people, you know? Like ‘What? What!’ She did what with who?”

One of the songs on the album is a country ditty called “Fell in Love with A Honky.” I asked if that was supposed to be her husband?

“Oh, my God. So, what’s funny about this song is it is not about my husband at all, because my husband is a metalhead. He’s not long and lean. He’s not any of those things. So, he laughed his ass off about it. The only thing that is true is that he is white. But other than that, the rest of it is he’s not a country man. It makes it a whole lot funnier. It’s all about fun and being funny, and at first John was like, I don’t want to do this.’ I said, ‘No, we’re doing this. We’re already breaking all the rules, so let’s continue to break some.”

Shemekia always does one of her father Johnny Clyde Copeland’s songs on each of her albums. I asked her if she’s running out of those songs to do? “No, not at all. I still got plenty more to fit with the record, and I just felt this one fit with this record.”

“The Dolls Are Sleeping” is about child abuse. “Gullah Geechee” is a history lesson about black culture in South Carolina and you can guess where she’s going with “Dumb It Down.”

On the title cut she sings: “Thought we were silenced at the Lorraine / But that voice didn’t die in vain / Its echo rings like no other / For every sister and brother / Though many are gone / Their spirits still scream / You can kill a man but not a dream.”

More than a month before the release of Done Come Too Far, Shemekia Copeland has won Blues Artist of the Year critics polls in both Downbeat and Living Blues magazines. She is a daily host of SiriusXM’s Bluesville Channel. In April she performed at The U.N. and her last album Uncivil War went to number one on Apple Blues charts and was Rolling Stone’s pick of the week within a week of its release in June of 2020.

Her creds are stretched over 24 years. She recorded her first album at 19 for Alligator Records, Koko Taylor’s label. She sang for President Obama. Dr. John produced her Talking to Strangers album. She’s opened for the Rolling Stones. Rolling Stone magazine calls her “a powerhouse, a superstar…She can do no wrong,” and Mojo, England’s number one rock magazine, calls her voice “rich, soulful and totally commanding…authoritative, passionate and raw.”

Shemekia takes the gloves off centuries-old issues that once were only addressed in field hollers and blues songs sung in code.