Johnny Winter once told Andrea De Luca, "Hey, you got it, man. Just keep on bluesin'.” 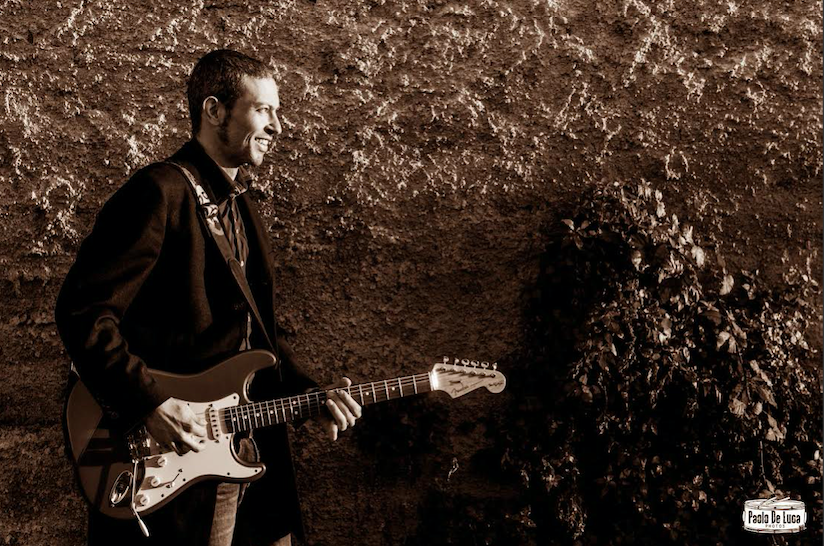 Andrea De Luca was born in Rome, Italy and began playing guitar at the age of six. “My dad used to play many great records during my childhood and my mom used to be a folk singer-songwriter,” he says. Andrea started playing in bands at age sixteen and led his own band as a front man. Andrea has been an opening act for Johnny Winter and Ennio and Andrea Morricone.

Renowned American Jazz Artist Mark Peterson says, “Andrea De Luca is a true blues artist. He is a kindred soul to the masters of music and he will add to its rich history.” His album Andrea De Luca Blues Trio is available here.

Who inspired you to start playing blues music?

Without a doubt, it was Jimi Hendrix. I remember that instant as if it happened yesterday. Seeing Jimi perform at Woodstock, unfortunately just on the TV, really shocked me and since I was a kid, I wanted to be a great artist like him. I was literally blown away by his energy and it still touches me emotionally.

Also, when I was first introduced to the music of Stevie Ray Vaughan, Eric Clapton, and Johnny Winter, I saw something truly magical in them which led me to seriously study blues music. Also, during the ’90s I discovered the music of Ben Harper and I immediately started studying lap steel guitar which is an exciting instrument and reminds me of the origins of the blues.

Do you have any favorite blues records?

Yes definitely. Eric Clapton’s From The Cradle was fundamental for me. I heard it a million times and I never get tired of listening to it. I love the sound of Eric’s guitar and his voice at the time was even more extraordinary. Also, the band was fantastic. I have no more words to describe how much I love that record. Another is Live at El Mocambo Club by Stevie Ray Vaughan. I guess that is one of the best blues-rock concerts of all the time. I call it a record because I put the audio on a cd.

Back in the day, every day I would come home from school and I would study Stevie’s guitar techniques and repertoire. That’s the reason I tune my guitars a half-step down with heavy strings. Another one is Continuum by John Mayer who is actually the guy who pushed me to mix blues with pop music. You can hear that on a few of my original songs. “Let Me Love You Tonight” is one of those. Even though it’s not a real blues record, Ben Harper’s Burn to Shine is a beautiful fresh southern, bluesy, soulful album. It is a perfect experience to go through if you need some inspiration. There is so much more to say and the list is infinite.

That’s a really good question. I am trying to push my music in the right direction. I’ve been a touring musician for my whole life starting at the age of fourteen. Unfortunately, I haven’t been so good with the digital market and that’s why I am trying to bring my music to the next level. Actually, I’m looking for a record label to help get my music out the right way. Also, I’m trying to endorse the O-1B work visa. My American dream will never end. I’ve been in the United States twice during 2017 and 2018 spending three months each year between Los Angeles and Portland Oregon. It was stunning and I found a super friendly blues musicians community.

Once there I spent nights at several music venues sitting in with the local bands and passing around my business cards. About a week later my phone started to ring and a few local bands hired me to do some gigs. That’s why I decided to start climbing this huge mountain which is the American immigration system just to be able to get music jobs in the U.S. But that’s only a side of what I’m doing right now because in the meantime I am trying to grow on social networks putting the focus on TikTok. Isn’t that funny?

Actually, I started working on that platform a month ago and I’m making mini tutorials on my personal page called “De Luca Blues” which is also the name of my official website. These are videos in English and the main topics are blues guitar and lap steel. Also, I’m setting all the things up to start a fresh profile aimed at Italian blues guitar lovers and I’ll name it “Amore Blues.” And to top it off, I’m a family man. I’m a father of two children. Miucha is two and a half years old and Jimi is seven months old. I am married to Carla Cocco who is a beautiful God-gifted singer. I am damn lucky.

How is blues received in Italy?

During both the ’80s and the ’90s, Italy was full of dozens of blues venues and to be honest I only saw a little bit of it because I was too young. I started to play as a pro at the very end of the ’90s. That’s why it is very hard to have a solid career as a blues musician. By the way, blues is still very appreciated in Italy and we have several great blues festivals all over the country. But I have to say it is a bit hard to fight my way to the top position because there are a lot of us and many good bluesmen, nationally speaking.

Next summer is going to be awesome because I’ll perform with a high-class power trio with Roberto Gatto on drums who is probably the most renowned Italian jazz drummer both in Italy and abroad. I made up an extraordinary show dedicated to Jimi Hendrix’s music making a psychedelic-blues journey across Jimi’s masterpieces. I’m really excited that festivals wanted me in order to represent Hendrix’s music.

It will be such an honor, and also it’s going to be a lot of fun especially because we are going to play three of the best jazz festivals here in Sardinia which is the Italian beautiful island I moved to a couple of years ago during the pandemic. In my opinion Italy is a good place to get festival gigs but you can’t rely only on that. You won’t make a living just with that. You need to work hard on small venues gigs, teaching guitar during the winter season, and you have to fly away from time to time (that’s the awesome part of the ride).

Due to the pandemic many venues have closed and are out of business and that’s sad. Now it seems we have a fresh start, but I have to say most venues owners don’t even know what blues is and there isn’t always a blues music culture. That’s the reason why most of the time you may perform in front of distracted audiences and you will not receive any energy back. When you set your tip jar up, people look at you and say “Wtf is that?” It is kind of like playing in front of a wall. There are some clubs where selective people come in.

In any case, the truth about small gigs is this: nonprofessional musicians have taken over the role of pro musicians for less money. Actually, it is a struggle to get fairly paid on a small venue gig. Just extend that to 80% of the live clubs all over Italy. That’s why the circle becomes smaller and you have to fight because of the large number of very talented musicians living exactly the same spot you’re living. I saw something like this in America too but up there it is big enough for everyone.

What is the best song you have written and why?

That’s a tough one, Brant. I think it is difficult to answer this question but I guess “Let Me Love You Tonight” could be considered the best song I’ve written. It is a screen-shot of Andrea De Luca’s music because everything is inside. This is blues with a funk flavor, a bit of pop-rock, and a lot of Hendrix style guitars. I wanted to write something that had enough glue to reach more people because of the catchiest music.

In 2014, I had the honor to open the Johnny Winter show in Italy. Actually, that was Johnny’s last concert in Rome – Rest in Peace. It was invaluable how nervous I was but in a good way. I knew that while I was playing, Johnny Winter was behind the scenes paying attention to me and that was absolutely crazy.

Also, at least 4,000 people attended the show and even if they were waiting for Johnny to appear on stage, they loved my opening show and they were crazy about my music. That was a blast. When we got off the stage, I ran into Johnny and he told me “Hey, you got it, man. Just keep on bluesin’.”

Do you also teach music?

Yes, of course. I’ve been teaching for 20 years. I love that side of my job. I do love to share my passion with others. When I was in Rome, I was hired by a huge music school and I had a lot of students (over 50). Right now, I am doing online lessons on both blues guitar and lap steel. You can learn more by visiting my website or TikTok profile.