'Blood On My Hands' is out today! 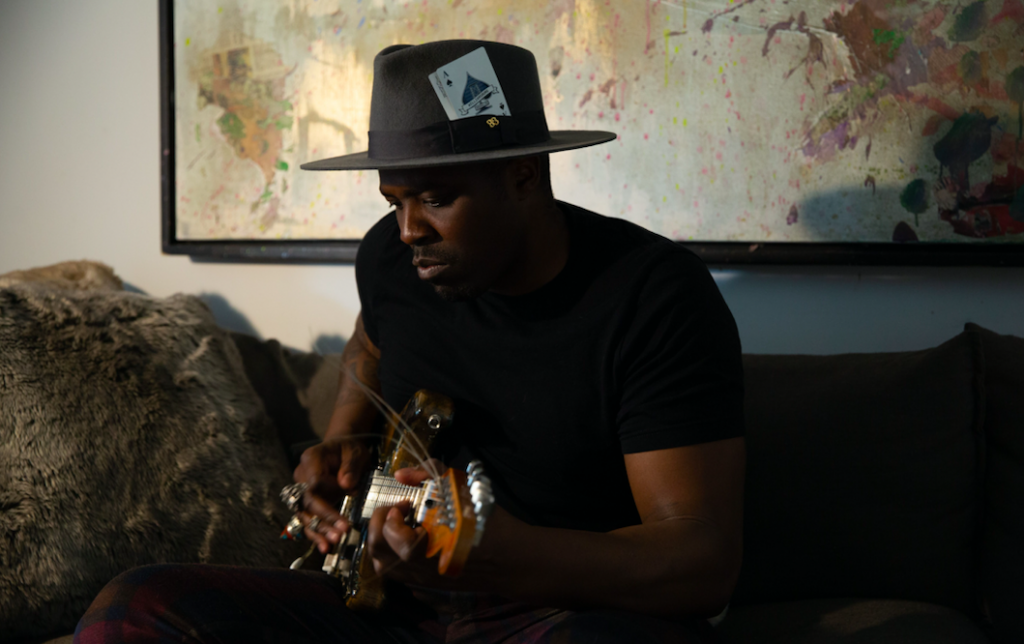 “‘Blood On My Hands’ being the title track says a lot,” Emanuel Casablanca tells me of his debut album, out today via Kings County Blues. The 16-song collection lays bare his abilities as a singer, songwriter, and instrumentalist as well as bridges the gulf between the case-hardened persona and one’s inner life. “I have done and been involved in some things that I am not particularly proud of and I truly believe that pieces of it are displayed in this record.”

To help further explore this concept of exorcizing demons, Casablanca enlisted guitar greats Albert Castiglia, Eric Gales, and Paul Gilbert; vocalist Kat Riggins and saxophone player Jimmy Carpenter. Blood on My Hands consists of tracks that he began writing back in 2017 with the hope he would have the record completed by 2019. Since Covid forced him to take his time, he decided to fine-tune his craft. “I felt that If I had to be in quarantine, then I might as well use my time as wisely as possible. I wrote, re-wrote and developed my music as much as I felt I could and then recorded the songs.”

Casablanca doesn’t see his home of Brooklyn, New York City different from other communities. But since everything is “in your face” in NYC his influences come from various genres and his guitar playing from various styles – most of which are non-traditional or even non-relative to the kind of blues/roots music that he’s mastered.  Throughout his time playing music, Casablanca has worked with figures such as Cheap Trick drummer Daxx Nielson, vocalist Bernard Fowler (touring member of the Rolling Stones), bassist Doug Wimbish of Grammy-winning Living Colour, Kevin Jenkins (bassist for Shemekia Copeland), bassist/producer Bill Laswell, among others.

His experiences have prepared him for this next chapter, and they have also taught him to just stick with what he’s doing day to day. Because it is working. “I have a plethora of those figures featured on this record and I think I am creating music just as good as many of them. The big question is whether or not I deserve a seat at the table; I believe that I do.” I couldn’t agree more.

One of the age-old stories in rock and roll is getting caught up in the crossfire of an interrupted world: continue pursuing music or get “a real job.” When he went to grad school, he studied journalism. One of his NYU professors turned out to be Rolling Stone editor Rob Levine, who in a lucky twist of fate only rekindled his music-playing interest. He then bought an inexpensive guitar as a birthday present to himself and taught himself by practicing for hours on end, before receiving lessons from a local blues musician.

“I have a lot of those stories within stories. I look back on some of my accomplishments and just some relationships and jobs I have had in the past. You may be surprised by some of the people I have known and/or whom I have come in contact with during this journey we call life. Speaking of Rob, I hadn’t heard of him until I was one of his students. But there is one thing he said that I would never forget and that was, after asking the class if we had read specific articles that were published in NYC publications. No one responds, so he then asks, ‘How do you all plan to be writers if you’re not reading?’

“I don’t know why that resonated with me so, but it was at a time I was wanting to get back into music, but I wasn’t listening to music. I wasn’t doing my homework. I think with digital platforms these days, it has made our music listening experience easy, but I remember when I was a kid – sometimes you didn’t know what you wanted to listen to, especially if you didn’t have a radio. I used to go to a record shop, DiscoRama on W4th Street in the West Village of NYC and I would ask the sales clerk, I believe his name was Kevin, what sound I was looking for and he could tell me about every record in a specific section. If he didn’t know, there was someone in the store who could. A lot of the time it was genre-specific, but it made me get up and go out and listen to and learn about music. Per Rob’s question, how do I expect to play music if I’m not listening to the music?”

I wanted to know if he ever applied lessons he extracted from journalism studies to writing songs. “I have loved writing since I was a child. I used to write a lot of poetry and short stories. I didn’t necessarily know what I wanted to do after college, so I went back to school and thought that this could be the opportunity to seize my chance to be a writer. With the love I have always had for both writing and music, I thought I could study journalism focused on arts and culture writing. Regarding transitional tools that could be used for songwriting, I’m sure that they are there. However, not to sound too artsy, I try to let each genre of writing live on its own. My methods for poetry are for poetry. My methods for songwriting are strictly for songwriting.”

There is a funny story Casablanca has about the violin as his first instrument. As a small child he smashed it to pieces simply because he didn’t like the way it sounded. But now it’s his favorite instrument. “I love it dearly and I wish I would have stayed with it when I was a child. I am a so-so violinist, but I know if I had applied myself, I could have been exceptional.” He makes clear, “I also don’t approve of instrument destruction.”

“Bloodshot Eyes” (featuring Albert Castiglia) showcases his devotion to classic blues all the while innovating. “Musically, this song begins very melodic with a kind of a soulful style of blues playing with a simple riff, but when it hits that chorus, it becomes a bit stronger and emotional giving the song a rock feeling. To me this track is the quintessential framing of a blues-rock song. I think that this song is a true look at my songwriting.

“As I have many songs that are not recorded, if I were to record them all, you would hear more songs that sound like ‘Bloodshot Eyes’ than any other sounds you hear from me. Lyrically speaking, this is a song of betrayal. Trust has been lost between two lovers and it is being expressed as much as it possibly can in through the lead character of this song.”

Albert Castiglia’s presence is crucial to the mission of the song, as he has a unique country blues twang accompanying his playing. His solo mimics the pattern, complementing Casablanca. “It is completely the opposite of the way I play, so it stands out firm in this track. When you listen to this song, try listening to it without Albert’s guitar and then come back and listen without trying to block it out. Albert brings a feeling in ‘Bloodshot Eyes.’”