The unifying theme of Steve’s playing is his ability to convey emotion using everything that a guitar offers. 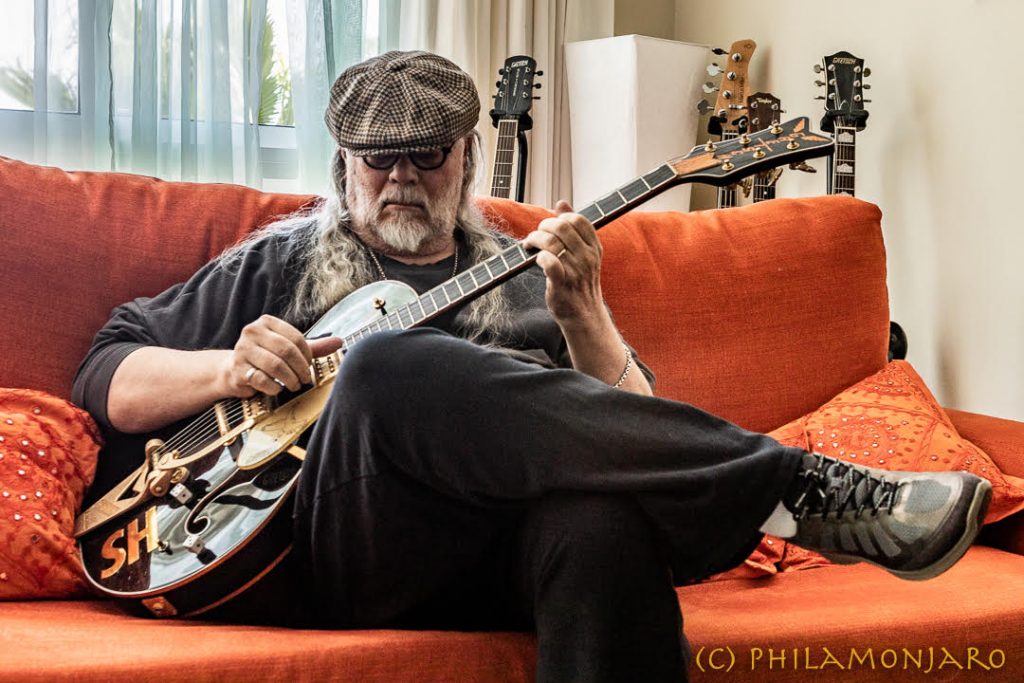 Over the course of 50 plus years, Steve Hunter has served as the main axe-man for music legends both in the studio and on tour. This includes greats such as Natalie Cole, Bette Midler, David Lee Roth, Tracy Chapman, Dr. John and more. Some of us may think we don’t know him. But we do. That opening acoustic guitar on Peter Gabriel’s “Solsbury Hill,” that’s Steve. Lou Reed’s Berlin, that’s Steve. Alice Cooper’s “Welcome to My Nightmare,” yep, you guessed it. A quick glance at his discography and you’ll realize how deep his well goes. At the heart of his playing are the blues. Germinated since his early years, this foundation continues on to today.

Like many teens in the mid-sixties, Steve became enthralled by The British Invasion. It was a new beginning of his musical journey. “I thought it was new music. I didn’t realize they were playing the blues. Because I didn’t even know what blues was. I was completely blown away that I had to be educated by the English about my own country and the black music that was right in my own backyard.”

Steve sought blues recordings in nearby Champaign, Illinois. Certainly college town record stores stocked blues LPs. Something nonexistent in his hometown Decatur, Il. On a singular mission, he culled the bins buying records of artists he was unfamiliar with, such as B.B. King and Freddy King. “Next thing I knew I was getting immersed in blues. It was painful that it was right there and I wasn’t even aware of it.” His curiosity in the blues continued. “I couldn’t put all this stuff together. I didn’t know Elvis Presley was doing the blues. All this history really made an impact on me”. Listening to Michael Bloomfield and Eric Clapton led him to Robert Johnson’s Crossroads and the delta blues. This evolved to long hours of playing guitar to stacks of vinyl. As one side finished, the turntable arm dropped another platter with new inspiration.

Steve’s band at the time dedicated one nightly set to just B.B. King songs. Soon he and his bandmates took a pilgrimage to Chicago to see B.B. King at the famous Mister Kelly’s. “Extraordinary. Better live than I even thought he would be.” As inspiring as the show was, it was Steve’s chat with B.B. afterwards that transformed his playing. “I thought, I GOT to talk to this guy!” The young guitarist sought wisdom from his hero. “No matter what I do I can’t sound like you.”

“That was the most extraordinary thing I’d ever heard from a musician. What he was telling me is that blues is a feeling. And you put the feeling in your fingers and you play that feeling. That IS the blues. That little bit changed my life.” A touchstone that stayed with him over the years. “Then B.B. said to me, ‘Don’t try to copy me. Learn from the records. But make it your own. Because I’m already doing it.’ He had changed my whole outlook on music and guitar playing”.

Soon afterwards he auditioned for, and got the gig playing guitar with Mitch Ryder. One distinct memory was playing at The Washington D.C. National Mall in 1971 for the anti-Vietnam War May Day protest. Recently discharged from overseas service, Steve felt solidarity with the cause. He considered that peace rally a pivotal event changing the tide of public opinion against the war.

Fast forward, Steve found himself at a loss on what to play for a guitar solo on an Alice Cooper track. Producer Bob Ezrin suggested playing a Clapton-esque blues solo. It was then Steve discovered how great it worked because “the blues is so melodic. If I can find blues in it, I should be able to play a solo. That marked the rest of my career.” He brilliantly demonstrates this blues versatility on his east-meets-west composition “One Night In Baghdad.”

Steve met Jack Bruce while recording together on Lou Reed’s Berlin which led to an invitation  to record on Jack’s 1974 solo album Out of The Storm. In a few short years he went from practicing Cream’s blues riffs to recording with a former member. Plus he recorded with two of his favorite drummers Jim Keltner and Jim Gordon. “It was a wonderful experience to play with those guys.” He remembers that the music was complex. “I was worried because I was naive musically. If he (Jack) just gave me the triad (chord) and root (note), that is how we got along.” He looked back fondly recalling one moment playing a solo then looking up and there was Mick Jagger in the control room. “I enjoyed working with Jack, I’m sure he got tired of me asking about the settings on the amp that Eric Clapton used for Sunshine Of Your Love. I couldn’t help it, they were one of my favorite bands.”

By the late ‘80s Steve found himself at a career low when interest for 70’s rock guitar fell out of fashion. But one not to give up, he responded to a classified ad in The L.A. Weekly by none other than music tastemaker Miles Copeland. Copeland was looking for artists to record all instrumental songs including 70’s guitarists for his new I.R.S. Records subsidiary No Speak. Label-mates included Peter Haycock, Randy California, Robbie Kreiger, Wishbone Ash, Stewart Copeland, William Orbit, Ronnie Monstrose, and others. When Steve signed, he recorded his material in record time. The opening track “The Idler” a prime example of his solo work.

Steve released Hymns For Guitar in 2008. This collection pays homage to gospel songs that inspired him as a child. He wrote original guitar arrangements of personal favorites. It began when Steve explored a Dsus4 open guitar tuning. He read Jimmy Page used this tuning on the song Kashmir. Bob Ezrin heard Steve’s demo of “Softly and Tenderly” and suggested recording a whole CD. Then an old bandmate heard the demo and said he could listen to a whole album of it. That was enough feedback to pursue it as a full blown project. He was “looking to gather up as many of the oldest ones I could find”. Most go back to the 1860 to 1880s. Steve wanted to highlight “these gorgeous melodies” to recreate on acoustic guitar a “cloud of sound” reminiscent of congregations singing in unison. And at times capturing that African American southern Pentacostal sacred steel sound.

Steve’s 2013 release, The Manhattan Blues Project, strikes at the heart of his love for the blues. Describing the recording, Steve’s stated “It’s what New York sounds like to me. It’s got this wonderful underbelly of jazz, but underneath that is blues. It always sounded like blues to me. What I call angst blues. That whole place is vibrating.” Steve’s affection for the city is clear.

But the unifying theme of Steve’s playing is his ability to convey emotion using everything that a guitar offers: overtones, melodic lines, voicing, attack and more. He draws upon a metaphor he had heard between Monet and Debussy when they would critique each other’s work. Monet used painting terms such as light, color, brush strokes, and saturation to describe Debussy’s music. And vice versa, Debussy used musical terms to describe Monet’s canvases. And like these great impressionist masters, Steve’s playing is something few achieve. He is a kind, wise soul who honors his gift with thorough dedication.

The new single of Steve and his wife Karen is out now. Listen to “Sweet Love of Mine.”