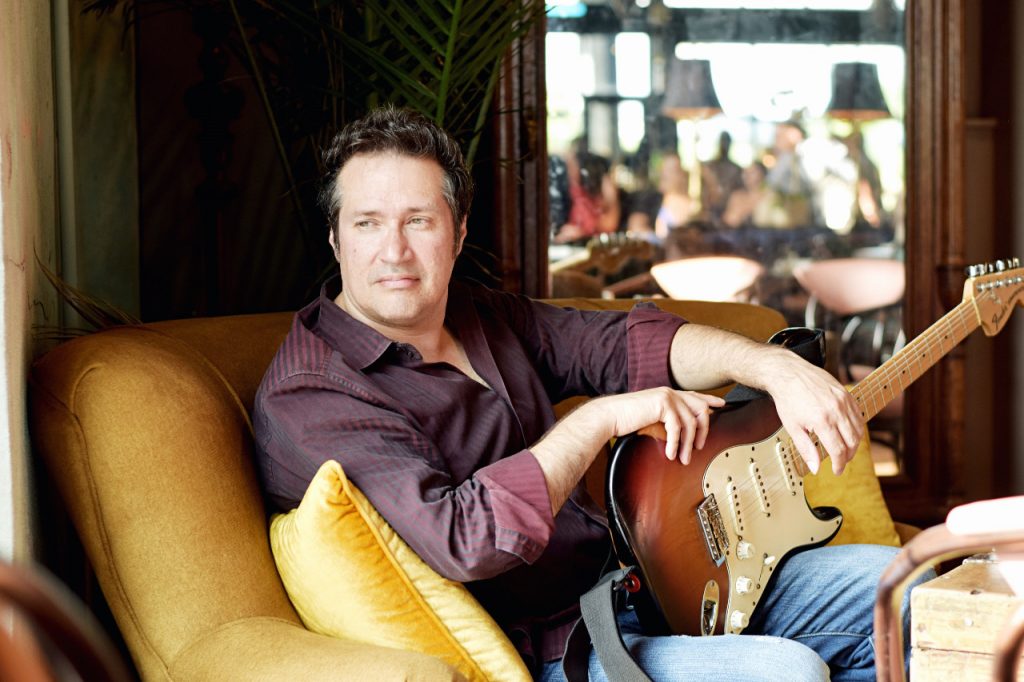 Florida singer-songwriter/guitarist Alex Lopez is a man on a mission to spread his musical vision around the globe . His sixth album, Nasty Crime, comes out firing on all cylinders with a high-powered collection of rocking blues, jazzy soul, heartfelt pop, and a touch of swing, fueled by his boundless passion.

The opening track, “World On Fire,” a powerful blues rocker with a strong message built on a relentless infectious riff and heavy Zepplinesque drum groove, is about the fragility of life and our planet. “When you follow the news it really seems that the world is on fire on many levels and that sometimes we let greed and arrogance overpower kindness and common sense,” Alex says.

“It reminds me of the Greek myth of Icarus,” he continues, “and how his arrogance destroyed him. I hope our hubris doesn’t destroy us.” The driving rocker “Just Wait,” follows with Lopez pleading for reconciliation from his lady love. His ringing tenor leads the fast-moving pop serenade “I Don’t Care,” and charms like a ’40s crooner on the easy swaying “When The Sun Goes Down.” Lopez professes his hope for the future on the optimistic “See The Light,” and takes a solo turn on the romantic acoustic ballad “The First Time.”

‘Nasty Crime’ is a song about how social media today can be weaponized. Whether it be through the phenomena called ‘fake news’ or treacherous gossip we have the power to ruin someone’s reputation, hurt lives and even incite bad or risky behavior by carelessly typing a few words.

The video was shot with some of the iconic landmarks in Tampa as backdrop and with a modern stylistic approach using vibrant colors. What I think makes it unique and maybe cutting edge was the use of drone photography to create some pretty cool shots. I hadn’t seen that in a lot of videos and really liked the approach.

Kana kicks a fat back beat and Hoye lays on the greasy B3 on the funky ode the power of the feminine “Holy Woman.” The blues of desperation, “No Way,” has a mysterious minor chord palette ramping up its drama. First recorded on his debut album Back Bedroom Blues as a slow blues, “Hooked” is reimagined as a speakeasy era swing time number. The slinky blues, “That’s Alright,” closes the set with more fine organ, big guitars and soaring vocals, exemplifying the Alex Lopez formula.

Born in the heartland of rock ‘n’ roll, Cleveland Ohio, Alex started playing keyboards before becoming inspired by British blues/rock bands to master the guitar. Influenced by greats like Eric Clapton, Jimmy Page and Jimi Hendrix, Alex spent his young adulthood performing in clubs and recording original songs in small studios while polishing his songwriting skills. Since his move to Florida to attend college, Alex has spent years as the vocalist and lead guitarist of the wildly popular rock band Reminiscion, before striking out on his own.

In September of 2013 Alex released the self-recorded album Back Bedroom Blues, a collection of all original blues and blues/rock songs, on which he played all instruments and introduced his formidable skills as a blues guitarist and singer/songwriter. In 2015 Alex Lopez released his second album, Is It A Lie, with his newly formed band, The Xpress, to excellent reviews. His third album, Slowdown, achieved a new level of success with international recognition and critical acclaim rising up the blues, jam and Americana charts with worldwide airplay and earning Alex fans across the globe. The follow-up album, Yours Truly, Me…, clearly positioned Alex to continue his ascent in contemporary blues.

Alex’s 2021 release written and recorded in the midst of the pandemic was the pure blues rocker Rising Up, which debuted in the top ten on the Billboard Blues chart, receiving outstanding reviews and recognition. The album solidified Alex’s position as blues rock force to be reckoned with and one of its rising stars.

On his social media page Lopez declares “the band and I have put together what I believe is going to be a monumental record, from top to bottom. The songs are about the challenging world we live in and messages of hope for a better day and the music rivals anything I’ve written.” That confidence comes shining through on each track of Nasty Crime from Alex Lopez.