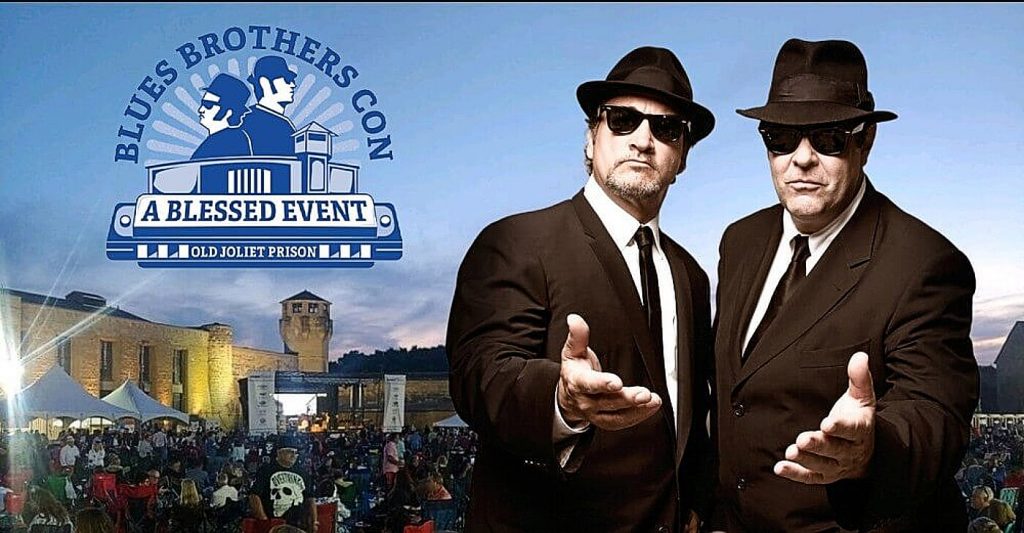 The Joliet Area Historical Museum will host a two-day event in celebration of the inaugural Blues Brothers Con to be held at the Old Joliet Prison, Aug. 19th & 20th, 2022. The sixteen-acre restored prison community will transform into a tapestry of sights and sounds to celebrate and honor the iconic Blues Brothers film that debuted in theaters more than 40 years ago. Actors and singers, Dan Aykroyd and James Belushi will reprise their iconic roles of Elwood Blues and Brother Zee for a 90-minute special performance on Friday night, Aug. 19th when the famous Old Joliet Prison will welcome back the Blues Brothers.

“Since the Museum began operations in 2018, the Old Joliet Prison has become a pilgrimage site for Blues Brothers fans from around the world,” said Greg Peerbolte, CEO Joliet Area Historical Museum. “We are honored to work with Dan Aykroyd, Judy Belushi Pisano and the Belushi family to preserve the cultural contributions of one the greatest films ever made. Blues Brothers Con will also help to repair the effects of the worst aspects of the Prison’s history by partnering with nonprofits and local faith-based organizations that support reentry and restorative justice initiatives.”

The Blues Con experience will also feature Bob’s Country Bunker, a Bluesmobile car display area, the Maxwell Street Vendors Market, and some classic ‘Orange Whips,’ made famous in the film. A free public screening of the Blues Brothers movie will conclude the festival Saturday night.

It is now more important than ever that we recognize, venerate and celebrate the unduplicable positive impact African American culture and blues music have contributed to the world. This is what the Blues Brothers were all about and Blues Brothers Con carries on that mission with dedication and commitment. Judy and I are grateful and look forward to an outstanding weekend of fun, food and celebrating everything that is blues music.

“I’ve wanted to do this for years,” said Judith Belushi Pisano. “I’ve lived in the Blues Brothers world for over 40 years and the mission to embrace blues music, share music and support live music remains constant. This festival is the perfect format for fans to embrace the blues and I can’t think of a better venue to host this event than the Old Joliet Prison. We intend to create an atmosphere reflective of the beautiful Chicago Blues culture, with music, food and artwork. Our goal is to craft a fun and uplifting experience that will leave people wanting more.”

The Joliet Area Historical Museum (JAHM) is a 501(c)3 not-for-profit organization that celebrates the diverse industrial heritage of the Joliet region. Founded in 2002, it operates a contemporary museum facility in Joliet’s City Center in the historic 1909 Ottawa Street Methodist Church. Since 2018, JAHM has operated the Old Joliet Prison Historic Site. In 2022, it will open two additional historic properties as museum experiences, the Planinsek Market and Union Depot Tower.