The Lumineers, CAAMP and James Bay Hit it Out of the Park at Wrigley Field

At Wrigley Field, The Lumineers were not going gently into that good Chicago night, with a fire and intensity going far beyond the album versions. CAAMP proved that the hype is real. And James Bay’s performance showcased a personable, engaging and passionate artist. 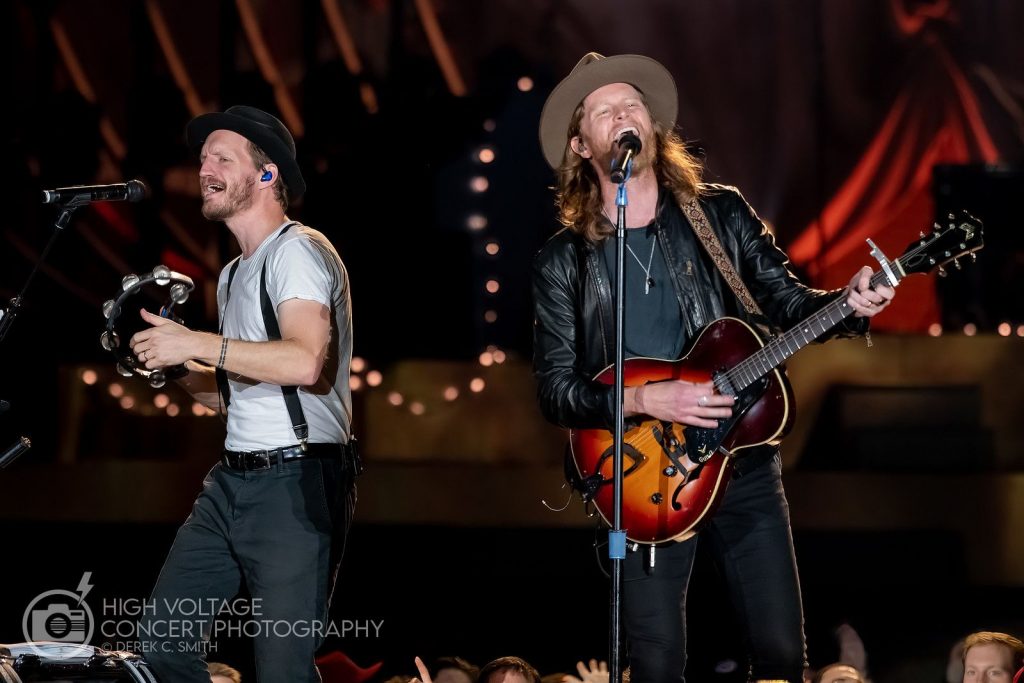 Never judge a book by its cover. Nor a band before seeing them perform live. This obviously does not apply to those bands who you love from the very moment you first hear one of their songs (I’m looking at you CAAMP), but some bands take a little longer to penetrate your soul.  Such was the case for me with The Lumineers.

Shamefully, I dismissed The Lumineers ten years ago with their first single and massive top-five hit, “Ho Hey.” Their second single, and equally massive hit, “Stubborn Love,” did nothing to change my mind. Nor did their Grammy nominations for Best New Artist and Best Americana Album. They were everywhere, but unfortunately my musical radar couldn’t pick up their transmission.  I heard them, but I wasn’t listening.

Four years later, The Lumineers released their second album, Cleopatra. Once again, it was filled with massive hits, namely “Ophelia,” “Cleopatra,” and “Angela.” Their popularity and talent were undisputable. They were so big, in fact, that they were pegged to open for U2 on the “Joshua Tree” tour in 2017.  But what does U2 know…

Fast forward to last year and the release of their fourth studio album, BRIGHTSIDE, which debuted at No. 1 on Billboard’s Top Album Sales chart.  Thanks to my daughter’s constant streaming of the album in our many car rides together, I began to pick up their transmission and, for the first time, truly listened to The Lumineers. I liked what I heard, so much so that “Ho Hey,” “Stubborn Love,” “Ophelia” and the rest of their hits that I summarily dismissed in years’ past, sounded different.  I finally heard the soulfulness, emotion and depth of their songs. For so long, I had been wrong – this was not a mere “folk” band.

What really did it for me, however, was seeing them live at Wrigley Field as they toured in support of BRIGHTSIDE. If that album is what finally got me on the right track with The Lumineers, their live performance is what sent me barreling 100 mph toward fandom.  Incredible.

From the opening salvo of the show, it was clear that The Lumineers — led by founding members Wesley Schultz (lead vocals, guitar) and Jeremiah Fraites (drums, percussion, piano) — were not going gently into that good Chicago night. Appearing on the catwalk some distance into the crowd from the main stage, Fraites, on a second set of drums, and Schultz on electric guitar, dove into the song “BRIGHTSIDE” with a fire and intensity that went beyond the album version, causing me to momentarily reel with awe before having to regroup for the equally intense onslaught of “Cleopatra,” “Ho Hey,” and “Angela” to open the set.  This was not what I expected.

Ironically, The Lumineers played a bit of The Rolling Stones’ classic “You Can’t Always Get What You Want” during “Leader of the Landslide.” Maybe all those years I stubbornly never wanted to like The Lumineers, but seeing them live at Wrigley Field is certainly what I needed.  It’s one of the reasons live music is so important – it allows you to see, hear and listen to a band in an entirely different light.

For other bands, the live performance is a culmination of our fandom. Not an opportunity to change our opinion, but rather to affirm it. CAAMP, the Ohio-based quartet who opened for The Lumineers at Wrigley Field, did one better – they cemented it.

Led by founding members Taylor Meier and Evan Westfall, CAAMP have enjoyed a somewhat meteoric rise since their 2016 self-titled debut album found surprising success with the single “Ohio.” It was their 2019 release, By and By, however, that really propelled them into the stratosphere of mainstream popularity with hits “Peach Fuzz” and “By and By” – the former of which peaked at No. 1 on Billboard’s Adult Alternative Airplay chart.

It seems as though nothing can stop this band. COVID tried but failed. In 2020, as the pandemic was still raging, CAAMP released the single “Officer of Love”. It soon became their second No. 1 hit. They have now released their third studio album, Lavender Days, once again hitting the top of the charts with the single “Believe.” Even Barack Obama has taken notice, adding “Apple Tree Blues” from Lavender Days to his summer playlist.

At Wrigley Field, CAAMP proved that the hype is real. The crowd was engaged and emphatically singing along throughout “Come With Me Now,” “Officer of Love,” “By and By,” and “Believe.” It was the type of crowd response normally reserved for the headliner, not the opener.

Perhaps most notable about CAAMP’s performance, however, was their ability to command the stage. Although their performance did not have the spectacle of The Lumineers, they held their own without getting lost in the enormity of the stadium – as many young bands are wont to do.  It is only a matter of time before they are headlining their own stadium tours.

Finally, James Bay opened the entire evening for both bands. Bay, the English singer-songwriter, has released three full-length studio albums, including the 2022 release Leap. Like The Lumineers and CAAMP, Bay’s music is a soulful blend of folk, roots and rock. And like The Lumineers, his live performance provided me a new pathway into his music.

I knew little of Bay beyond mere recognition of his hit single “Hold Back the River” from his debut full-length album Chaos and the Calm in 2014, but his performance at Wrigley Field showed me a personable, engaging and passionate artist that requires more of my attention.