"Much of the album is an appropriate observation to some of the issues of the day, and the effect these issues can have on a person." Listen exclusively to the title track from upcoming 'Weight of the World,' out February 17 via Forty Below Records! 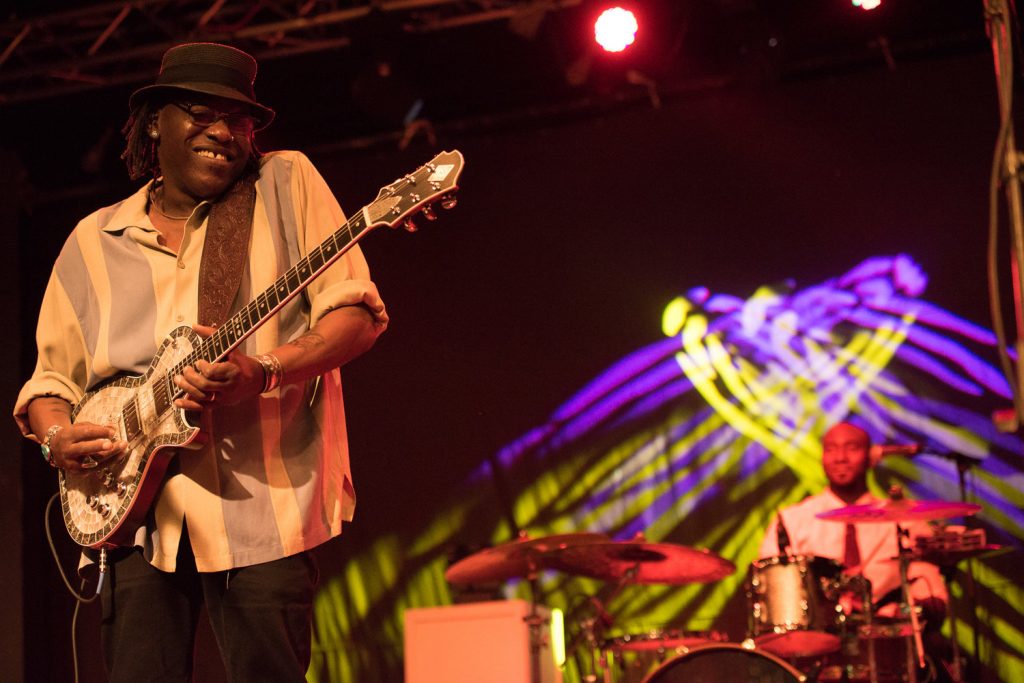 On February 17th, songwriter, singer, and guitarist Joe Louis Walker will release his new album, Weight of the World, via Forty Below Records. Recorded with producer Eric Corne (John Mayall, Walter Trout, Sugaray Rayford), Weight of the World is an impressively broad sweep through genres as well as Walker’s longtime influences.

Many organizations have recognized this prolific blues/roots musician for his achievements; He’s a member of the Blues Hall of Fame, six-time Blues Music Award winner, and has won multiple W.C. Handy Awards. He’s been a recipient of both San Francisco’s Bammy Awards and a lifetime achievement award from the Mississippi Valley Blues Society. A musician’s musician, Walker has been called “a national treasure” by Herbie Hancock. Chick Corea cleverly labeled him “The Chick Corea of Blues,” while Aretha Franklin called him “The Bluesman.”

Throughout his storied career, Walker has dueted with B.B. King on his Grammy Award-winning Blues Summit album and played guitar on James Cotton’s Grammy-winning album, Deep in the Blues. He’s performed at music festivals such as Glastonbury and Montreux, and on national television with appearances on Late Night With Conan O’Brien, The Don Imus Show and Later With Jools Holland in the UK.

Walker has recorded with Ike Turner, Bonnie Raitt, Taj Mahal, and Steve Cropper, among others; he’s also opened for Muddy Waters and Thelonious Monk. “I think having dinner with Muddy Waters every other day, when he let me open up for him a couple weeks in 1970, is something I’ll never forget – as well as him watching me play and giving me pointers, trying to help me become a better musician and bandleader. It was the old Colonial Tavern in Toronto. I also have fond memories of all the folks you’ve mentioned, which I’m putting in my book next year.”

Premiering today is the title track, a metaphor for the times in which we live – a post-pandemic world of both prices and global temperatures rising.  “Out here at the edge of the world / It’s starting to curl / We’ve upset the big shareholder,” he sings in a soulful vocal glide. No doubt Walker is a dyed-in-the-wool bluesman, but if you back and look at the other 30 records in his discography, you’ll see soul music as a main ingredient. And interestingly, with this song in particular, a wave of Main Ingredient (the band)-style melody washes over. “I feel blues, soul, gospel, and jazz are all cousins,” Walker tells me. Continuing, “Rock and roll is the offspring of the blues, as Muddy Waters said. So all I’m doing is reaching into my influences, when it fits.”

The Eric Corne-penned “The Weight of the World” means just what it says. “‘Woke up with the weight of the world on my shoulders.’ I think we all get that feeling; it’s universal,” says Walker. “Much of the album is an appropriate observation to some of the issues of the day, and the effect these issues can have on a person (“The Weight of the World,” Is It a Matter of Time,” “Hello, it’s the Blues,” “Waking up the Dead”…) The titles and the songs paint a picture of some of the things that we all have questions about.

Of the album, Walker states, “Instrumentally, we’ve been able to utilize instruments that aren’t normally used in the blues genre: violins, nylon string guitar, etc. Hopefully the listener will hear the songs and say, ‘That’s the way I feel’ or ‘That’s what I was thinking.’ I’ve worked with many producers and Eric Corne’s talent puts him right up there. He is a triple threat: songwriter, singer, producer. Extremely talented and he’s got a vision of where he wants to go.”

Walker plans to tour extensively to support the new record, expressing, “The band and I are chomping at the bit to play these songs live!”

Pre-order Weight of the World