'My Heart' is out today via Pravda Records! 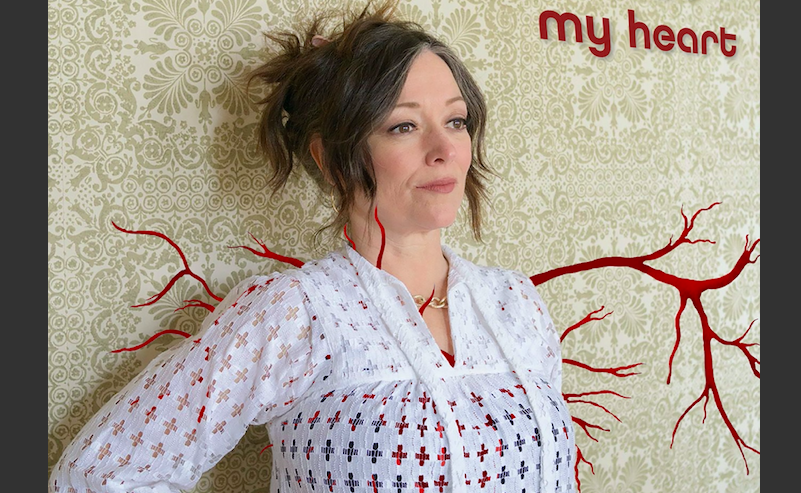 It’s been nearly 18 years since Nora O’Connor’s last solo record, Til the Dawn, came out on Bloodshot Records. Meanwhile, she’s plied her trade as the Emmylou to one’s Rodney Crowell – a highly in-demand harmony vocalist/multi-instrumentalist who’s played with the likes of Iron and Wine, Neko Case, Mavis Staples, Jakob Dylan, Andrew Bird, The Decemberists, and many others. She had been wanting to make another record, and it wasn’t until the world was at a standstill that the opportunity presented itself.

“There’s a venue called SPACE,” O’Connor, who lives in the chicago suburb of Evanston, explains to me. “In the middle of the summer they started doing these ‘SPACE To-Go’ shows. Jake, the booking agent, reached out and asked, ‘Would you be interested in doing this?’ I said, ‘Yeah, I got nothing else going on,’” she laughs. “So I started playing these yard shows for like, you know, 20 people all spread out and I just kept doing it. It was kind of the only thing going on, and it motivated me to just see what was in there. And by in there I mean what was in me, like what songs would even happen if I started writing these songs.”

The result? Her third solo album, My Heart, out today via Pravda Records.

One way she gets in touch with her muse is by listening to music she loves. She credits folk-rock cult band the Fruit Bats for some of the inspiration and motivation that filtered into the making of this album. “I started listening to all the Fruit Bats albums; I just went crazy listening to the Fruit Bats. And then I just trusted the process as things were coming out, and felt good. You know, this time around, I didn’t stop myself where I might have – I’ve had little starts and stops over the years. This time I really followed through.” O’Connor loves being an interpreter of songs, and she loves turning listeners on to obscure artists or obscure songs by well-known artists. “And I do that in a couple of the bands. I just kind of felt like if I’m going to do these solo shows, I should have a good handful of more. I’ve been singing the songs on my first two records. It was time.”

My Heart draws you in like any great book, opening with “Sore” – a song that strikes the right balance between avant Americana and classic country with its melodic structure and rich, smooth vocals. The title track and first single offers a nice tip of the hat to the Cowsills in its infectious, mid-tempo piano pop, and is a case of less is more. “It’s such a funny thing what happened with that song, because I wrote it on acoustic guitar and I was working really closely with Alex Hall whose studio I recorded most of the content of the record – and Casey McDonough. But Alex and Casey and I were kind of the core people working on my record. And so I’m playing guitar and Casey’s playing bass, Alex playing drums, I’m showing them the song, and then I walked over to the peak and was like, ‘okay, let’s just see what happens if we press record. Let’s just see. But then I started playing piano.

She was joined in the studio by three of her bandmates from Chicago vocal supergroup the Flat Five: Casey McDonough on vocals, bass and acoustic guitar; Scott Ligon on organ, Wurlitzer and guitars (Casey and Scott are also current members of NRBQ); and Alex Hall on drums, percussion, piano, Wurlitzer, mellotron, and vocals. Steve Dawson handled guitars, Wurlizter, harmonium, along with Robbie Gjersoe on dobro, electric guitar and Jon Rauhouse (longtime member of Neko Case’s band) who contributed pedal steel. “I didn’t want it to be like Nora O’Connor and the Flat Five, but it was just kind of hard to not ask my players and friends. And then there’s a singer-songwriter in town; his name is Steve Dawson. He’s a great musician. I took his songwriting class years ago called Finish Your Damn Songs. And at the time we didn’t have any songs written, but we had to have a new song every week. It was a great exercise for me to write and finish a song, and bring it.”

Steve proved a mentor on this record as well. “I sent him some songs and we talked a lot about writing and he helped me tweak some songs. He engineered and mixed a couple of the songs on my new record. He did ‘Grace’ and ‘Outta Space.’ I recorded those two songs between Alex’s studio and Steve’s studio, but then he mixed a couple of songs for me. He was really great to work with and I felt comfortable showing up a little insecure. He steered me when I was unsure about a couple things. He’s like, ‘No, this is great.’ But he would push me a little bit harder than I may have pushed myself. So, he’s a good friend and adds a great ear to the songs.

“Right when I started writing these songs, Robbie Fulks had a songwriting class online (also at Old Town School of Folk Music). So I took his class and it was one week of him just lecturing. And the next week was a smaller class where everybody brought one song, and we would all critique and talk about it. I actually brought my demo of ‘Sore,’ and he gave me really good feedback and sound advice on songwriting, saying, ‘If the song feels good, keep going and finish it. And if it doesn’t feel good and you’re working too long on it, maybe it’s time to step away from that idea and move on to something else.” Classes such as these have helped her to trust her gut and have confidence to explore the art of arranging.

O’Connor knew she wanted to work with Alex Hall on this album, because of the way he hears and records instruments. “I’m not trying to reinvent the wheel. I like guitar. I like bass. I like drums. I like Hammond. I like guitar solos. I like piano. But by the end of the recording process, after we started playing with some other things, I realized how much I love MIDI flutes and MIDI strings and the harmonium of all things. I feel like Alex just knows me. We set up microphones and basic tracks. There’s one song, ‘Tarot Card,’ that has a ‘70s, super warm sound to it. I didn’t ask for that. It’s almost like he read my mind. He has known me long enough that he knows what microphones to use on my vocal from experience with singing in his studio for so many years.

“And then working at Steve’s studio, I just knew it was a place where I could feel comfortable trying things out and making mistakes and trying other things. Both Steve’s place and Alex’s place felt like really safe places for me to do this thing I haven’t done in a really long time. I ended up doing a lot of vocals at home in my home studio. That was great, for me to just sing these things any way I wanted with nobody around and really experiment. Some of the vocals I recorded at home, then others it was like I was practicing at home and brought ideas to the studio.

2021 found her back out on the road with Neko Case as well as with The New Pornographers. She calls it luck to have worked with the greats, and others unequivocally consider that talent. “Living in Chicago, there’s such a rich and wonderful supportive community here; Wilco, Mavis, Andrew Bird – he and I actually toured together in the late ‘90s. And when he comes to town, often he’ll send me a text like, ‘Come on down and sing.’ It’s great. So I feel like I’ve had a front seat; I feel like I’ve been in this master class for a really long time. I’ve just watched how other people do it, how they stay healthy and sane on the road, and somewhat grounded. I keep getting these wonderful opportunities come my way and I’ve found a way to work well with other people. I play well with other people.”

She is either playing for dozens of people or thousands of people. “I like this balance of going to work with these other bands and having this really important role. With Neko, I sing backup and I play bass for her. With The New Pornographers, I sing and play lots of percussion. I play this little instrument called the Kaossilator. Kelly Hogan (for whom O’Connor also plays bass and sings backup) always says, ‘Harmony singing is 10% singing and 90% listening. So it’s a different muscle.

“I’ve always played solo this whole time. I play all the time, but it’s been a long time since I’ve really put a band together and played a ton of my own shows in a row. I like the idea of playing different kinds of venues like galleries. I want to do a living room tour at some point. It’s fun to do my own thing so I can sing anything I want, any way I want.” To say the least My Heart has encouraged O’Connor to not wait this many years to do another solo record. “I forgot how much I love recording and creating my own thing. So, it’s a great exercise in trusting myself.”