‘Brace Yourself’ For Too Slim and the Taildraggers’ Latest Live Album

We talk with Tim “Too Slim“ Langford, the driving force behind this powerhouse trio. 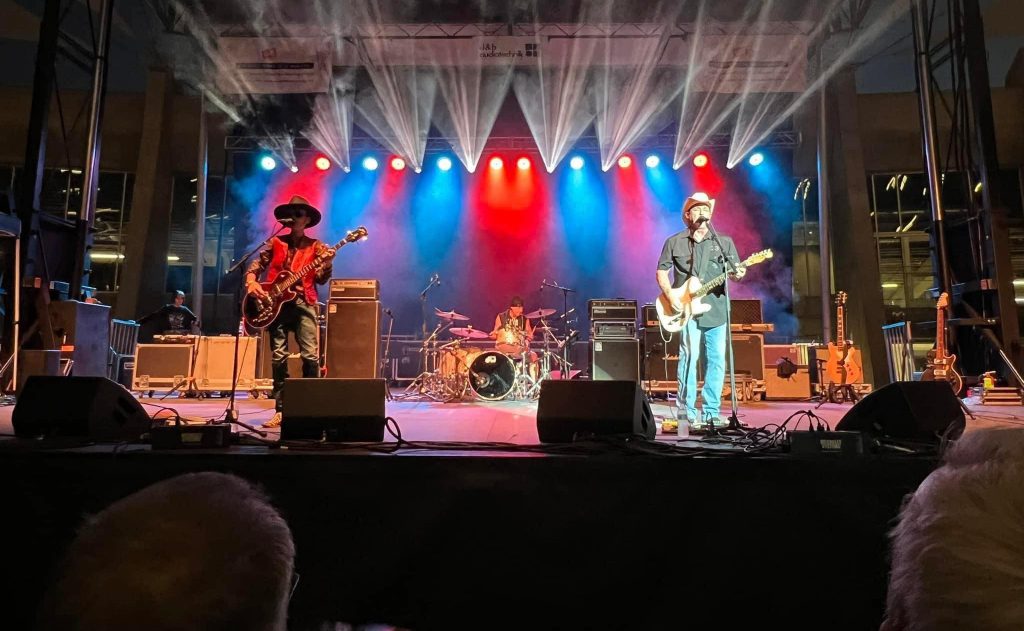 When speaking to Tim “Too Slim“ Langford, the unabashed blues rocking front man of Too Slim and the Taildraggers, he’s quick to point out that Brace Yourself (out via VizzTone) is “like number six” of live albums the trio has released in their ongoing career. That’s not counting their 15 studio albums (6 of which hit the Billboard Top 10 Blues Chart) and two compilation albums.

The originally Pacific Northwest based group is currently made up of Langford on guitar/vocals, Zach Kasik on bass/vocals and Jeff “Shakey” Fowlkes on drums/vocals. Their high energy blues rock has been thrilling audiences for years. The band’s ever evolving musical direction cannot easily be classified into any box or category, and that is very apparent on Brace Yourself. Recorded at Ohme Gardens in Wenatchee, Washington, classic rock, blues rock and Americana influences are all showcased throughout the performance.

We’ve got a few slower songs we play if we’re doing two sets a night, but for the most part we like to rock out.

The Taildraggers don’t tour quite as much as they did 30 years ago, when they would hammer out 200 shows a year or more, but when they get on stage, either in a club or at a festival, the audience knows they’re there.

When we’re out there on the road, I try to book up every single day if I can. We try to plan it smart so we don’t end up owing money when we go back home. Maybe some younger guys still go out and to that, but I don’t want to (laughs). Don’t get me wrong, I love going out there and doing it, but you have to be smart about it.

In the early days, I was based out Northwest, so getting to the East coast and going down like South and Southeast was difficult to do more than once a year or something like that. But now band is closer to those areas. One guy lives in Nashville and one guy lives in Muscle Shoals and I live in Idaho. We’re just winding up for the year really. We have the Craft Beer and Blues Festival in Florida in November and that’s it.

I’d really like to maybe try to knock out a new studio album early next year. We’ll see. Our last studio album kit was The Remedy. It came out in 2020 during the middle of the pandemic, which really kind of sucked. I wish actually I would have sat on it, and released it in 2021.

For the most part, Brace Yourself lives up to its title. Songs like “Cowboy Boot,” “Mississippi Moon,” and “Devil in a Doublewide,” are foot stompin’, ass kickin’ original rock-n-roll classics. “Blood Moon,” has a taste of the late, great Jimi Hendrix running through its veins, while “Twisted Rails,” conjures up images of Robin Trower. “When Whiskey Was My Friend,” has a definite early ZZ Top vibe and “Good Guys Win,” is a Reverend Horton Heat meets Chuck Berry jam.

With most of the songs being six minutes or longer in the live forms, it begs the question how a band that’s been cranking out these high energy shows since the ’80s are able to keep that energy level up.

Staying in shape. Not drinking and taking drugs (laughs). But yeah, I don’t know. I’ve always thought my attitude towards the show is, every single day you go in and try to play like, the best show you’ve ever played. Because if you slack off, it’s gonna be that time when, you know, there’ll be a time when somebody goes, ‘Yeah, I saw that guy. He sucked.’ I mean, it’s like you can’t afford to just go in and take it for granted, playing kind of a half assed show or low energy show. I just want to bring it to ’em. I mean, it’s a little hard to do when you’re older you know, but I still try to do it.

Have we mentioned that Too Slim and the Taildraggers are a primarily blues rock band? Of course we did, but what got them into that genre in the first place?

Well, it was when I first started playing guitar. I mean, I was into music, so as a kid my first album was a Beatles album. I started to get more and more into music like Paul Revere and the Raiders, Cream, Jimi Hendrix and The Doors and bands of the late 60s were my favorite bands. And then had my older cousin, who was a musician. So that was the plan. I finally ended up going to a ZZ Top concert like 73 or something like that. I was probably 12 or 13 or whatever it was. Anyway, that just blew my mind. My friend down the street had a guitar and he loaned it to me. It was just a piece of shit Harmony acoustic guitar, but I was determined to learn how to play and so then I mowed lawns and stuff and saved up for a cheap Japanese electric guitar. And I was just one of those people like, I’d come home from school and practice my guitar and fall asleep with it in my lap.

When I first started playing, I was really drawn to bands like, like Creedence Clearwater and Neil Young and Crazy Horse and Lynyrd Skynyrd and stuff like Marshall Tucker Band. My best friend. I talked him into playing bass, so we had a little band and we’d jam it in his place with his older brother who had this huge record collection. So he easily turned us on to it and goes ‘okay, if you’re gonna do this, you gotta listen to this stuff. We had BB King records and Allman Brothers. You know, Elmore James and stuff like that. It’s really cool stuff course. We thought man you know, nobody’s playing that stuff. You know? This is the coolest stuff ever! I just started buying every blues album I could find. BB King records, Freddie King, Otis Rush, stuff that.

My guitar teachers were awesome. They were jazz players. So I also got into guys like Wes Montgomery. I like to listen to anything because I played in the high school jazz band too and ended up playing in the Spokane Jazz Orchestra. But I just really wanted to just play rock and roll blues. I played in a country band because there was an ad in the paper for a lead guitar player and a bass player. So me and my buddy went and auditioned for that. We were like, 18, 19 at the time. They hired us to play in this country band for a couple of years. It was a lot of fun as they were older guys, you know. But then I was going to college and played with the jazz band at the college. This bass player, he goes ‘You like blues, right?’ I’m like, ‘Yeah.’ ‘You gotta go see this band.’ This band was playing a club called Washboard Willie’s in Spokane. I went down there and it was the Robert Cray band. I was like, oh my god, you guys are the shit. And that was it for me, man. I want to start a blues band.

A while later I was digging in a record collection at one of our local records stores, and I found Stevie Ray’s Texas Flood album. That was another epiphany moment because that’s such a bad ass record. It really started a blues insurgence too. Then there’s bands like Little Charlie & the Nightcats, Anson Funderburgh, Ronnie Earl. I was really influenced by all those guys.

If you haven’t had the privilege of seeing Too Slim and the Taildraggers in person, get yourself to the nearest show when you can. If you have, but don’t make it out too much these days, grab a copy of Brace Yourself, and relive those glorious live show moments. They’ll rock your socks, and then some.

Too Slim and the Taildraggers

Amy Brat Brace Yourself Tim Langford Too Slim and the Taildraggers Vizztone
Share. Facebook Twitter Pinterest LinkedIn Tumblr Email WhatsApp
Previous ArticleExclusive: Blues Guitarist Seth Rosenbloom Premieres ‘Did You Try To Break My Heart’
Next Article Listen: New Single From Lex Grey and the Urban Pioneers, ‘I Believe in You’